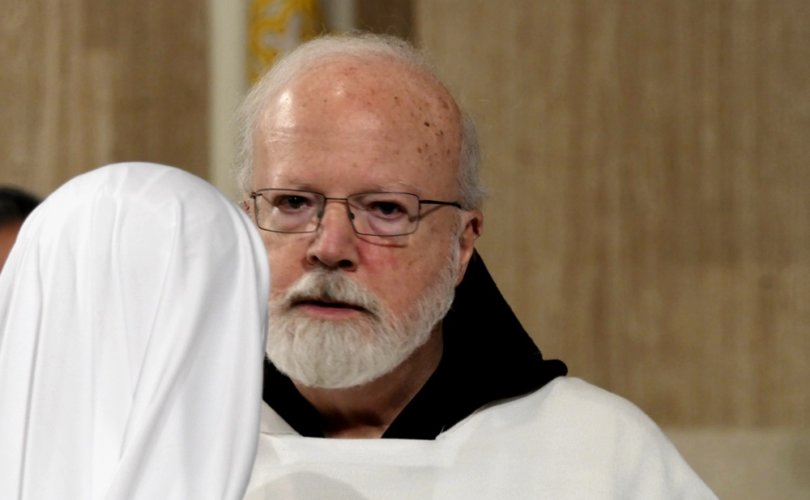 Cardinal Sean O'Malley distributes Holy Communion at the Vigil Mass for Life the day before the 2018 March for Life.Claire Chretien / LifeSiteNews

BOSTON, Massachusetts, July 25, 2018 (LifeSiteNews) – Cardinal Sean O’Malley, head of a papal commission on combating clerical sex abuse, has finally broken his silence on the Cardinal McCarrick scandal, saying he never saw a letter detailing some of the accusations about the elderly prelate.

“Recent media reports also have referenced a letter sent to me from Rev. Boniface Ramsey, O.P. in June of 2015, which I did not personally receive,” O’Malley wrote in the Boston Pilot. “In keeping with the practice for matters concerning the Pontifical Commission for the Protection of Minors, at the staff level the letter was reviewed and determined that the matters presented did not fall under the purview of the Commission or the Archdiocese of Boston, which was shared with Fr. Ramsey in reply.”

The Archdiocese of Boston has strict mandatory reporting policies when it comes child abuse, but those apparently do not compel clergy to report allegations against senior church officials outside the diocese. O’Malley’s statement did not indicate that his secretary, Father Robert Kickham, who responded to Ramsey’s letter, did anything beyond telling the fellow priest that the matter was not under their “purview.”

O’Malley argued that the Church needs better “policies” for dealing with predatory bishops, something Catholics have longed pointed out that the U.S. bishops’ 2002 charter on protecting children lacks. Others note that although a strong policy should be in place, bishops should be inclined to report known abusers regardless of the Church’s “policy,” rather than knowingly turning a blind eye.

“While the Church in the United States has adopted a zero tolerance policy regarding the sexual abuse of minors by priests we must have clearer procedures for cases involving bishops,” O’Malley acknowledged.

“Transparent and consistent protocols are needed to provide justice for the victims and to adequately respond to the legitimate indignation of the community,” he wrote. “The Church needs a strong and comprehensive policy to address bishops' violations of the vows of celibacy in cases of the criminal abuse of minors and in cases involving adults.”

The cardinal said he is “deeply troubled by these reports that have traumatized many Catholics and members of the wider community.”

“These alleged actions, when committed by any person, are morally unacceptable and incompatible with the role of a priest, bishop or cardinal,” O’Malley said at the beginning of his statement. “In one case involving a minor the Archdiocese of New York, after investigation, has found the accusation to be credible and substantiated.”

That “credible” accusation is that McCarrick molested a 16-year-old altar boy 50 years ago.

“While another accusation concerning a minor is yet to be investigated, the reports are devastating for the victims, their families and for the Church itself,” O’Malley continued. “Each new report of clerical abuse at any level creates doubt in the minds of many that we are effectively addressing this catastrophe in the Church.”

The uninvestigated accusation is that McCarrick began sexually abusing James – who has asked that his last name not be used – at age 11. That abuse went on for decades and escalated from McCarrick dropping his pants to touching his genitals, sleeping naked with him, and worse.

There are also numerous reports from former priests and seminarians that McCarrick sexually abused them as adults. Two of those former priests received settlements from New Jersey dioceses, one for $100,000 and one for $80,000.

On Tuesday, Catholic News Agency revealed that McCarrick reportedly lived on the property of a seminary after his retirement.

The accusations of child sex abuse against McCarrick “are understandably a source of great disappointment and anger for many,” wrote O’Malley.

It remains to be seen whether Pope Francis will remove McCarrick from the College of Cardinals or defrock him, although the latter could present canonical difficulties. There are also dozens of unanswered questions about who in Church leadership knew, when they knew, and why they remained silent.

Cardinal McCarrick should be laicized and his enablers should resign: Psychiatrist

Cdl. McCarrick and those who covered for him betrayed their priestly vocation

When Pope Francis joked about Cardinal McCarrick going to hell