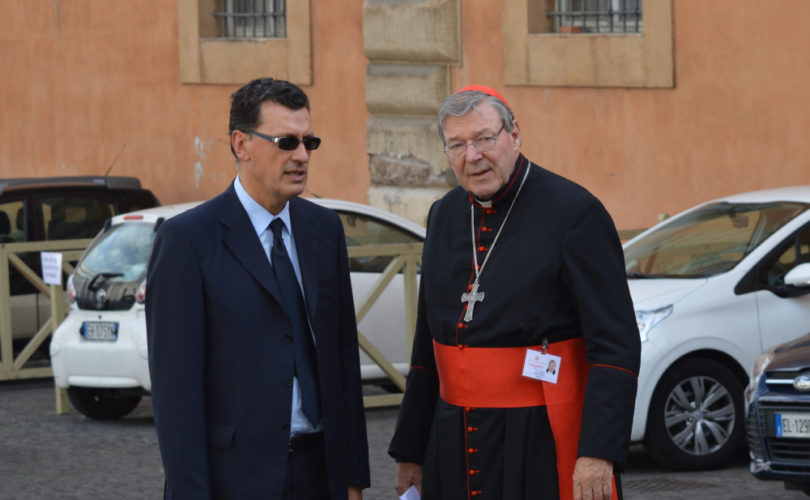 Cardinal George Pell, then head of Pope Francis' new secretariat on Vatican finances, stands outside the Synod hall October 13, 2014 after the Synod on the Family's controversial interim report was read.Patrick Craine / LifeSiteNews

ROME — Australian Cardinal George Pell, to whom Pope Francis has entrusted reform of the Vatican finances, says the Synod on the Family’s controversial interim report suggesting openness to homosexuality, divorce, and cohabitation was “tendentious and incomplete” and the Church’s job now is to reassure the faithful of the Church’s doctrine.

Numerous cardinals and bishops at the Synod on the Family, including a plurality of at least two of the three English-language small groups charged with reviewing the “relatio” this week, have strongly criticized it.

Pell told The Tablet’s Christopher Lamb on Wednesday that three quarters of the Synod fathers who spoke after the relatio was read Monday morning raised concerns. It was meant to be a summary of the Synod fathers’ interventions in the first week, but Pell said it was an “incomplete resumé.”

He said it was “strange” that the document included little about the teachings of Scripture and the magisterium, and noted that there is much more at stake than merely the issue of Communion for divorced-and-remarried Catholics, which is “only the tip of the iceberg.”

“In seeking to be merciful, some want to open up Catholic teaching on marriage, divorce, civil unions, homosexuality in a radically liberalising direction, whose fruits we see in other Christian traditions,” he told Lamb.

“The task now is to reassure good practising Catholics that doctrinal changes are not possible; to urge people to take a deep breath, pause and to work to prevent deeper divisions and radicalising of factions,” he added.

The Synod concluded its work Wednesday in the small groups charged with reviewing and revising the interim relatio, and they have now been submitted to the General Secretariat, which is supposed to take them all into account in preparing a final report. Known as the Relatio Synodi, that report will be read on Saturday morning to the Synod fathers, who will then vote on whether to accept it.

The Vatican will release the Relatio Synodi to the public on Saturday as well. In the case of the interim relatio, it was released to reporters in Italian before it was even read to the Synod fathers. It’s unclear whether they will follow the same process on Saturday.

Many Synod fathers have admitted they were surprised to see that the interim relatio was published at all, especially in light of the fact that for the first time the bishops’ interventions in the first week were not released, and some have openly criticized the way the Synod has been handled.

Cardinal Raymond Burke, prefect of the Apostolic Signatura, has even charged that the General Secretariat in charge of the Synod has manipulated the message and taken an approach that is “not of the Church.”

“All of the information regarding the Synod is controlled by the General Secretariat of the Synod which clearly has favored from the beginning the positions expressed in the Relatio post disceptationem of yesterday morning,” he told Catholic World Report on Tuesday.

He said Monday’s document is one that “faithful shepherds … cannot accept,” and given the direction of events leading up to and during the Synod, said he believes a statement from Pope Francis defending Church teaching “is long overdue.”

At the Vatican’s own press conference Tuesday, South African Cardinal Wilfrid Napier said that the release of Monday’s relatio has meant that Synod fathers are “working from a position that is virtually irredeemable.”

Among its most controversial propositions, the interim relatio asks whether “accepting and valuing [homosexuals’] sexual orientation” could align with Catholic doctrine; proposes allowing Communion for divorced-and-remarried Catholics on a “case-by-case basis”; and says pastors should emphasize the “positive aspects” of lifestyles the Church considers gravely sinful, including civil remarriage after divorce and premarital cohabitation.

Update Oct. 16 9:20 a.m. EST: We originally included quotes from Cardinal Müller, made in his small group at the Synod and reported by La Repubblica, criticizing the interim relatio released on monday. But at Thursday’s press conference at the Vatican, Father Federico Lombardi, director of the Holy See Press Office, said that Cardinal Müller asked him to tell the press conference that he did not use the words ascribed to him in La Repubblica’s report. According to Lombardi, Müller said it is not the language he would use. It’s unclear exactly what led to Lombardi making this statement, and what words Müller actually used in the small group, but it is clear that Müller, among many others, has raised serious concern with the interim relatio released Monday.