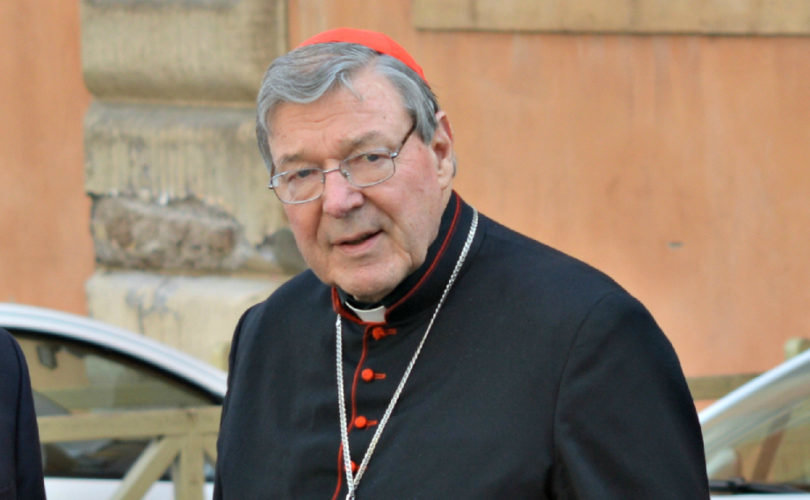 AUSTRALIA, June 29, 2017 (LifeSiteNews) – Vatican Cardinal George Pell, who has for months been vilified by the secular media, was charged with sex abuse in his native Australia. The situation is seen by even non-Christians in the nation as a “trial by media” against Pell – “a lynch mob from the dark ages.”

The Cardinal announced Thursday he's returning to Australia to defend himself against these “false” charges. Pell will go on leave from his job as the Secretariat for the Economy, the pope's financial czar. He is scheduled to appear in Melbourne Magistrates Court on July 18.

“It is unclear what allegations the charges announced Thursday relate to, but two men, now in their 40s, have said previously that Pell touched them inappropriately at a swimming pool in the late 1970s, when Pell was a senior priest in Melbourne,” the Associated Press (AP) reported.

“I'm innocent of these charges. They are false,” Pell said at a press conference. “The whole idea of sexual abuse is abhorrent to me.”

“I'm looking forward finally to having my day in court,” he said. He said his leave from his Vatican job will be to “clear my name” and that he's grateful Pope Francis is allowing him to take a leave of absence. He said he's kept the pope informed of the situation as it's developed.

“All along, I have been completely consistent and clear in my total rejection of these allegations,” Pell continued. “News of these charges strengthens my resolve…and court proceedings now offer me an opportunity to clear my name and then return here, back to Rome, to work.”

Pell has been attempting to reform the Vatican's finances, which are often unclear and shrouded in secrecy.

The Australian government has been investigating how the Catholic Church handled sex abuse over the past few decades. Pell has “became something of a scapegoat in Australia for all that went wrong with the Catholic Church in its mishandling of the sex abuse scandal,” the AP noted. “Actually proving the charges may be difficult.”

Pell has been attacked within the Church as well for his defense of Catholic orthodoxy. He defended doctrine at the 2014 synod on the family. He was one of the 13 cardinals who signed a letter to Pope Francis expressing concern with the direction the synod was going, particularly as related to the “Kasper proposal.” It was Pell who hand-delivered the letter to Pope Francis.

Nevertheless, Pell remains a key player at the Vatican.

“Many people will be shocked, as I have been, by the news that Victoria Police have issued charges against Cardinal George Pell in relation to sexual abuse allegations,” Sydney Archbishop Anthony Fisher, OP said in a statement. “In granting Cardinal Pell leave from his role as Prefect of the Vatican Secretariat for the Economy, Pope Francis has emphasised respect for the rule of law – which includes the right of every citizen to due process and the presumption of innocence.”

“Pope Francis also commented that during the three years that they have worked together he has always found Cardinal Pell an honest man,” Fisher said. “Having known him for the best part of three decades myself, I can only support that judgment: the George Pell I know is a man of integrity in his dealings with others, a man of faith and high ideals, a thoroughly decent man.”

“No-one should be prejudged because of their high profile, religious convictions, or positions on social issues,” Fisher said. Pell has spoken in defense of the Church's teaching on marriage and bioethical issues.

“While Archbishop of Sydney and during his current role, Cardinal Pell has cooperated with parliamentary, Royal Commission and police investigations and has ensured that clergy and church workers have done the same,” Fisher noted.

Writing for the Sydney Morning Herald on May 30, Amanda Vanstone, a columnist who said she doesn't identify “as a believer” and has a “deep distrust of organised religion,” defended Pell against his “trial by media.”

“The media frenzy surrounding Cardinal George Pell is the lowest point in civil discourse in my lifetime. I'm 64,” Vanstone wrote. “What we are seeing is no better than a lynch mob from the dark ages…What we are seeing now is far worse than a simple assessment of guilt. The public arena is being used to trash a reputation and probably prevent a fair trial.”

“Civilised as we are we've discarded the death penalty,” she continued. “Oddly, we seem to condone death by a thousand cuts through public persecution. We allow a career and a reputation to be destroyed because a baying crowd thinks they can be the arbiter of guilt and innocence.”

She finished with a biting indictment of those attacking Pell because of his unpopular views:

“The rule of law is there to protect us all, not just the popular or the cognoscenti of the day. Just because you sit at a desk, your chosen weapon is the written word or a microphone and you enjoy a latte before lunch doesn't make you any better than the crowds of far right roughnecks rampaging through Europe. Smashing up some shops and cars, smashing a career and reputation, just because you feel angry, is the same thing…

Cardinal Pell and I have widely and perhaps wildly divergent views on a number of matters. So what?

Having differing views isn't meant to be a social death warrant for the one with the least popular views. It's a meant to be one of the markers of a truly civilised society. If there's a prosecution simply to assuage public opinion that would be a travesty of justice. It would mean senior law enforcement can't tell the difference between the public interest and what might interest the public.

Using the media to persecute someone is not the moral equivalent of using the law to prosecute them. Still, bottom feeders often delude themselves.”

Pell is the highest-ranking Catholic official ever to be charged with sex abuse.