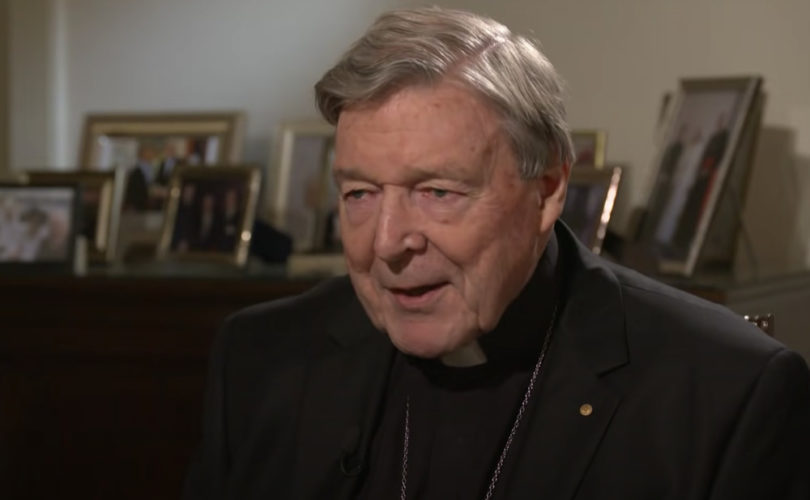 VATICAN CITY, April 30, 2021 (LifeSiteNews) — In a newly released interview, Australian Cardinal George Pell has issued a warning to dissident German clergy, describing their opposition to the perennial teaching of the Church as “ominous,” and stating that it is the “duty of the German bishops to uphold the teachings of Scripture” and the Church.

Cardinal Pell, now aged 79, sat down with EWTN’s Colm Flynn to discuss the second volume of his prison journal. The wide ranging interview, aired on April 27, covered Pell’s 405 days in prison after having been unjustly convicted of child sexual abuse, as well as issues in the Catholic Church today.

One of those prominent topics was the state of the Church in Germany, described by the former prefect of the Vatican’s Secretariat for the Economy as “ominous.”

He mentioned “two basic positions,” one of which takes its guidance from Scripture and the Catholic Church, whereas the other is an “alternative Christian point of view,” in which “the last word comes from modern understandings of the Scriptures.”

“I think that there is a percentage of the German church which seems to be resolutely heading in the wrong direction. By that, I mean it is quite clear that a liberalized Christianity, whether it is a liberalized Catholicism or Protestantism, in a generation or so merges into agnosticism.”

His comments come as large parts of the church in Germany have reacted angrily to the recent reiteration of Catholic doctrine, when the Congregation for the Doctrine of the Faith (CDF) responded in the negative to a question about whether the Church had “the power to give the blessing to unions of persons of the same sex.”

Since then, a number of bishops and hundreds of priests have expressed their “disappointment” at the document. Among those opposing the CDF are German prelates including Bishop Georg Bätzing, who chairs the German Bishops’ Conference; Bishop Franz-Josef Overbeck, bishop of Essen; and Austrian Cardinal Christoph Schönborn.

This dissent has been supported by the head of the Vatican’s Dicastery for the Laity, Family and Life, Cardinal Kevin Farrell, who signaled a way around the recent Vatican document banning the blessing of same-sex unions.

He offered the opinion that the German church would avoid committing to separating from Rome, suggesting that “I don’t think they will cross the rubicon, but we’ll see. You never know.”

“The really important issue for the Church is: Do we teach publicly what Christ taught? Now some of those teachings are quite unpopular: forgiveness; people with no rights like the unborn; people at the bottom of the pile.”

He defended his own teaching of doctrine, mentioning that a bishop is required to teach the truth, no matter the unpopular reception: “As a church leader, should you speak up on issues where you know you’re not going to get the popular vote, where you know most of the people are against you. Basically, we have an obligation to keep presenting the teachings of Christ and the teachings of the Catholic Church.”

“And our society will be deeply diminished to the extent it moves radically away from the Christian teachings on love and service and forgiveness, and we can already see that in society in the changes that are taking place. We’re often concentrating on the losses to the Church in the decline of practice, and the departure of believers — that’s certainly true. But it has big consequences for society generally, especially when a majority of the people had been Christian.”

Pell’s warning is already being proved true, as just days ago, over 550 priests in Germany announced that they would defy the Vatican and hold a special day on which to offer blessings for same-sex couples. A much-hyped blessing service for same-sex couples entitled “Love wins, blessing service for lovers” is now planned for May 10, with more than 50 Catholic parishes so far signing up to offer such a blessing.

While this was described by Bishop Bätzing as an unhelpful event, which would not be “a way forward,” he re-affirmed his commitment to the German Synodal Path, saying that the members of the Synodal Path had been conducting discussions for some time “about the way in which the Church’s sexual morality, also regarding homosexuality, can be further developed with viable arguments — on the basis of fundamental truths of faith and morals, progressive theological reflection, and likewise in openness to more recent results of the human sciences and the life situations of people today. This also includes an appropriate discussion of the question of blessing services. In the present situation, the Synodal Path is a central place to discuss the topic of successful relationships in a comprehensive way.”

Cardinal Pell’s unequivocal warning to the German prelates on the matter of adherence to Catholic doctrine is supported by Cardinal Raymond Burke. The American prelate, formerly prefect of the Apostolic Signatura for six years, made his comments to EWTN’s Raymond Arroyo last month.

Referring to the widespread tone of rejection to the CDF’s decision, Cardinal Burke mentioned that it was symptomatic of the influence of the pro–homosexual agenda within the Catholic Church: “The blowback is simply an expression of a worldliness, a mundanity, which has entered into the Church by which the aggressive homosexual agenda is now dominating even in certain ecclesial circles and even among certain bishops.”

As for the ban itself, Burke noted how it was a repetition of Church teaching on the matter: “It simply states what the Church has always taught and practiced with regard to same-sex attraction and when it leads then to acts which are intrinsically disordered, not according to God’s plan.”