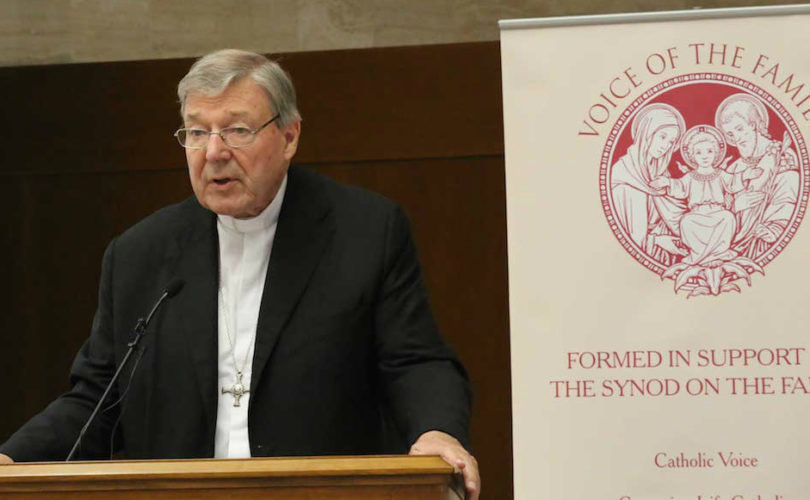 Cardinal Pell speaks at the Rome Life Forum in Rome on Saturday, May 9.Steve Jalsevac / LifeSiteNews

May 10, 2015 (LifeSiteNews) – Speaking to a gathering of over 120 international pro-life leaders and hundreds of other guests in Rome on Saturday, Cardinal George Pell said that he expects that the upcoming Ordinary Synod on the Family will “massively endorse” the Church’s traditional teachings on communion for divorced and “remarried” Catholics.

The Rome Life Forum was launched by LifeSiteNews in 2014 and is now run by Voice of the Family, a coalition of dozens of pro-life and pro-family groups. Pro-life leaders gathered for two days of private strategy sessions, before a public portion during which Cardinal Pell gave his address.

Also in attendance at the public afternoon session was Cardinal Raymond Burke. He and Pell have been among the strongest voices raising concerns about the way last October's Extraordinary Synod on the Family – the prelude to the upcoming Ordinary Synod – was used by what Cardinal Pell has called a small group of “radicals” to promote an agenda to undermine the Church’s teachings.

In an interview last October, Cardinal Pell had warned that the very public push to allow divorced and “remarried” Catholics to receive communion is only a “stalking horse.” In reality, he said, those behind this push “want wider changes: recognition of civil unions, recognition of homosexual unions.”

This push for “wider changes” was reflected in the Extraordinary Synod’s now-infamous “mid-term report,” which, suggested, among other controversial passages, that the bishops wanted the Church to learn to “value and accept” the homosexual “orientation,” and included the “Kasper proposal” to permit divorced and remarried Catholics to receive communion.

Although these particular paragraphs were subsequently voted down by the Synod fathers, they remained in the final report. Cardinal Reinhard Marx from Germany has stated that Pope Francis himself ordered that they be retained in the final document.

That document will form the basis for discussions of the Ordinary Synod, raising concerns about a reprise of the efforts to push through the changes.

Cardinal Pell’s concerns about the Synod are especially noteworthy, given his position as one of the “group of 8,” a group of cardinals hand-picked by Pope Francis to serve as his closest advisors in aiding his efforts to reform the Vatican.

In his keynote address to the Rome Life Forum Saturday, Cardinal Pell spoke on the topic of parents as the best educators of children. In addition to outlining current challenges to the family, he pointed out an irony in contemporary society. “We realize better than we did 50 years ago that if we violate the laws of physical nature…consequences follow,” he said. However, he added, “we find almost no public acknowledgement that if we violate the natural moral order harmful human consequences can follow.”

Cardinal Pell wondered rhetorically if we aren’t “digging our own graves” by “removing the laws which defend the ideal of exclusive, lifelong marriage.”