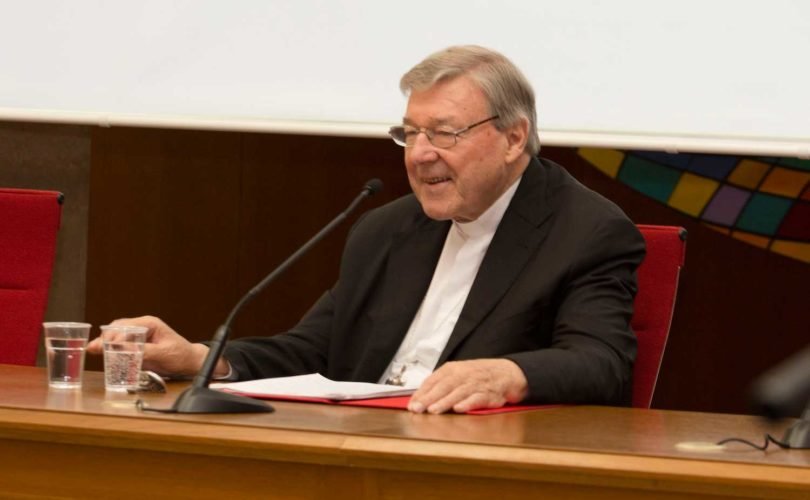 MELBOURNE, Australia, February 26, 2019 (LifeSiteNews) — Lawyers for Cardinal George Pell are working to keep the 77-year-old Australian prelate out of jail pending an appeal of his convictions of sexually abusing minors.

The highest ranking churchman to be charged with sexual offenses, Pell was convicted in December 2018, but details of his trial were under a publication ban until Tuesday.

It has now been revealed that Pell was convicted of one charge of sexually penetrating a child under 16 and four counts of committing an indecent act on a child under 16, the BBC reported.

Judge Peter Kidd lifted the ban after prosecutors dropped a second trial on unrelated charges based on allegations that Pell sexually abused two boys a Ballarat swimming pool in the 1970s due to insufficient evidence.

Pell steadfastly repudiated the charges and pleaded not guilty.

“Cardinal George Pell has always maintained his innocence and continues to do so,” Pell’s lawyer, Paul Galbally, said in a statement on Tuesday.

“Although originally the Cardinal faced allegations from a number of complainants, all charges except for those the subject of the appeal have now been either withdrawn, discharged or discontinued. He will not be commenting in the meantime.”

Many in the Vatican are of the same mind, according to Pentin.

“Most people here don’t believe the verdict,” Pentin told Australian newspaper The Age. “Most here believe Pell is innocent, certainly those who worked with him.”

Pentin acknowledged that there’s speculation in the Eternal City that Pell, widely regarded as the third most powerful man in the Vatican, was the victim of a conspiracy to oust him.

At the time he was charged, Pell was Vatican treasurer, a member of Pope Francis’ council of nine cardinals, and in the words of the Guardian, had been “handpicked to oversee the Vatican’s complex finances and root out corruption.”

“Pell was extremely unpopular in parts of the Vatican, particularly the old guard keen on keeping the old system running because they were doing so well out of it,” Pentin told The Age.

“There is this constant suspicion that the timing (of the charges) was not coincidental and there were some backroom dealings to get him out,” he said.

Pell, who is recovering from knee surgery, will be back in a Melbourne court Wednesday morning for a pre-sentencing hearing.

Each of the five convictions carries a maximum of 10 years in jail, reported the Daily Mail.

Judge Kidd was expected to order Pell remain in custody until he is sentenced in about two weeks’ time. However, Pell’s lawyers scheduled a bail hearing in the appeals court Wednesday afternoon in an effort to keep Pell out of jail pending his appeal, reported the Mail.

His lawyers won’t get an appeal date until Pell has been sentenced, according to Pentin.

Now published details of Pell’s November trial reveal the prosecution relied mainly on the evidence of one complainant, now 35, who alleged Pell sexually abused him and another choir boy in the sacristy of Melbourne’s cathedral in 1996 when they were 13 years old, reported the Guardian.

The complainant further alleged that Pell abused him again in early 1997 by pushing him against a wall in the hallway to the chorister’s change room and squeezing his genitals.

The second alleged victim died of a heroin overdose in 2014 and told his mother he had never been sexually abused, reported the Guardian.

Pell’s lawyer, Robert Richter, argued the complainant’s story “makes no sense because it did not happen,” the Guardian reported.

He said it was improbable the boys would leave the procession unnoticed. The sacristy would have been a “hive of activity” after a High Mass and it was “laughable” to suggest Pell would be able to move his cumbersome robes to expose himself and do what the complainant alleged, reported ABC.

Cathedral Master of Ceremonies Monsignor Charles Portelli testified that he remembered accompanying Pell and helping the archbishop robe and disrobe after the Sunday Masses during the time the events allegedly took place, it reported.

“His account is ultimately based on some kind of fantasy, or a fiction, or an invention,” he said, according to ABC.

The Crown’s case “is built on speculation. You would not hang a chicken on that, let alone decide a man’s fate,” Richter told the jury.

“Only a madman would attempt to rape two boys in the priests’ sacristy immediately after Sunday solemn Mass,” he pointed out in his summation.

Pell echoed this himself in a video interview with a detective that was played in the court, the Guardian reported.

Pell described the charges as “a load of garbage and falsehood.” When the detective told him the alleged assault took place after Sunday Mass, Pell replied: “That’s good for me as it makes it even more fantastically impossible.”

However, Pell’s decision not to take the stand “made a negative impression” on the jury, one source told NCR’s Pentin.

Pell was removed from the Council of Cardinals last October after the verdict, and his five-year term as Vatican treasurer expired Sunday, according to The Age.

The Vatican said Tuesday the pope “has confirmed the precautionary measures which had been imposed by the local Ordinary” on Pell when he returned to Australia in 2017 to answer to the charges, which is that he is banned from public ministry and any contact with minors, CruxNow reported.

The Holy See will wait for the results of the appeal before taking further steps, said Vatican spokesman Alessandro Gisotti.

He reiterated that the Vatican has “maximum respect for the Australian judicial authorities” and that Pell “has confirmed his innocence and has the right to defend himself to the last degree.”

Richter is appealing the conviction as unreasonable and contrary to the evidence the jury heard, according to The Age.

A source close to Pell told Pentin the same.

“People in court saw how flimsy the evidence was,” said the source. “This is an act of outrageous malice by a prejudiced jury. The media convicted him long ago in the court of public opinion and he did not receive a fair trial.”

That is echoed by commentators who say Pell was targeted long before his conviction.

“Charges have been flying at Pell for 15 years. Hundreds of claimants insist that he must have done this and must have known that,” wrote Julia Yost in First Things in July 2017, when Pell was first charged with multiple counts of historic sexual offenses.

About half of these were thrown out by a magistrate in May 2018 on the grounds of insufficient evidence.

“Cardinal Pell has become an unpopular figure in Australia, a convenient scapegoat for the abuse scandal there,” wrote Phillip Lawler in Catholic Culture after Pell’s conviction in December.

“It is noteworthy that police opened an investigation of Cardinal Pell, looking for evidence of sexual abuse, before receiving a complaint,” he wrote.

According to sources, Pell is “taking each development as it comes, and willing to see the process through to the end to prove his innocence,” reported Pentin.