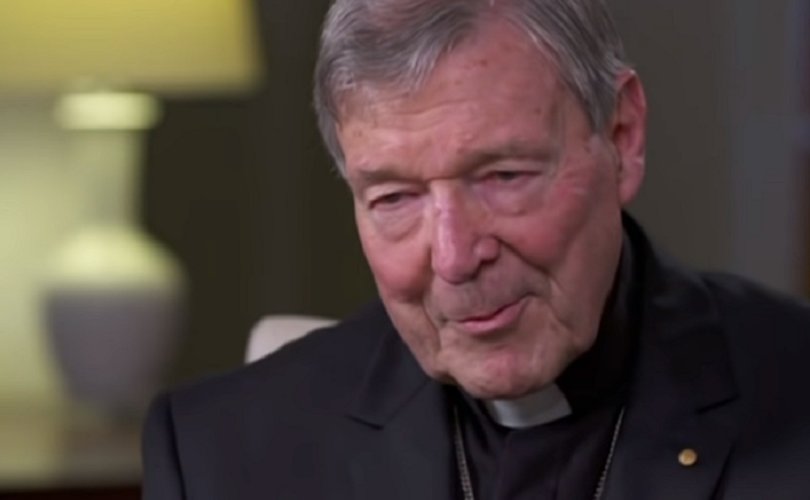 AUSTRALIA, July 9, 2020 (LifeSiteNews) — Cardinal Pell says he was once spat on in prison, but his Catholic sustained him during the thirteen months he spent behind bars before he was unanimously acquitted by the Australian High Court of historic sex abuse charges.

“For many, time in prison is an opportunity to ponder and confront basic truths. Prison life removed any excuse that I was too busy to pray, and my regular schedule of prayer sustained me,” Pell explained in an article for First Things.

Pell said he had been able to attend Mass only five times during his time in prison and that he had never been allowed to celebrate Mass, something he said he particularly lamented at Christmas and Easter. He was, however, able to receive Communion each week and to pray from a breviary.

“My Catholic faith sustained me, especially the understanding that my suffering need not be pointless but could be united with Christ Our Lord’s,” the cardinal explained.

“I never felt abandoned, knowing that the Lord was with me — even as I didn’t understand what he was doing for most of the thirteen months. For many years, I had told the suffering and disturbed that the Son of God, too, had trials on this earth, and now I myself was consoled by this fact. So, I prayed for friends and foes, for my supporters and my family, for the victims of sexual abuse, and for my fellow prisoners and the warders.”

Pell has previously said that he “never felt forsaken” during his time in prison as he received “something like 4,000 letters.”

The Australian cardinal says he experienced “kindness and friendship” from fellow prisoners but that on one occasion, he was spat on.

“I was in isolation for my own protection, as those convicted of the sexual abuse of children, especially clergy, are vulnerable to physical attacks and abuse in prison,” he explained.

“I was threatened in this manner only once, when I was in one of two adjacent exercise areas separated by a high wall, with an opening at head height. As I walked around the perimeter, someone spat at me through the fly wire of the open aperture and began condemning me. It was a total surprise, so I returned furious to the window to confront my assailant and rebuke him. He bolted from the front line out of my sight but continued to condemn me, as a ‘black spider’ and other less-than-complimentary terms.”

Pell, 79, was in prison from February 2019 until April this year after a jury found him guilty of two counts of sexual assault against a child on December 11, 2018. He always denied the charges, which hinged on the uncorroborated testimony of one person. Last year, the Victorian Court of Appeal upheld the initial guilty verdict.

In April, he was unanimously acquitted after Australia’s top court held two days of an appeal hearing, in which Pell’s prosecutors, led by Victorian director of public prosecutions Kerry Judd QC, shifted their position on key evidence relating to Pell’s alleged sexual assault of two choirboys after Sunday Mass at St. Patrick’s Cathedral in Melbourne.

News of the charges broke in 2017, when Pell was in Rome serving as the Vatican’s Secretariat for the Economy. Pell is believed by many to have been working to reform the Vatican's finances, including reportedly opposing a 50-million-Euro loan to help the Vatican purchase a scandal-ridden hospital in Rome. In order to face the charges, Pell voluntarily returned to Australia from Rome, saying at the time: “I’m innocent of these charges. They are false. The whole idea of sexual abuse is abhorrent to me.”

Shortly after being released from prison, Pell told Sky News Australia that senior people in Rome believe that his conviction and imprisonment in Australia were related to the trouble he was causing to “corrupt officials in the Vatican” as he led the financial reforms.

During that same interview Pell said regular prayer, as well as good practical habits, helped him during his time in prison.

“I followed the advice I’ve often given to priests when they’re in a bit of trouble. Keep up your prayers; get out of bed at a good time; eat properly; exercise every day and try to sleep at night,” he explained.

Cardinal Pell: ‘What I am really looking forward to is celebrating a private Mass’

‘I never felt forsaken’: Cdl Pell opens up about 4,000 letters of support he received in jail