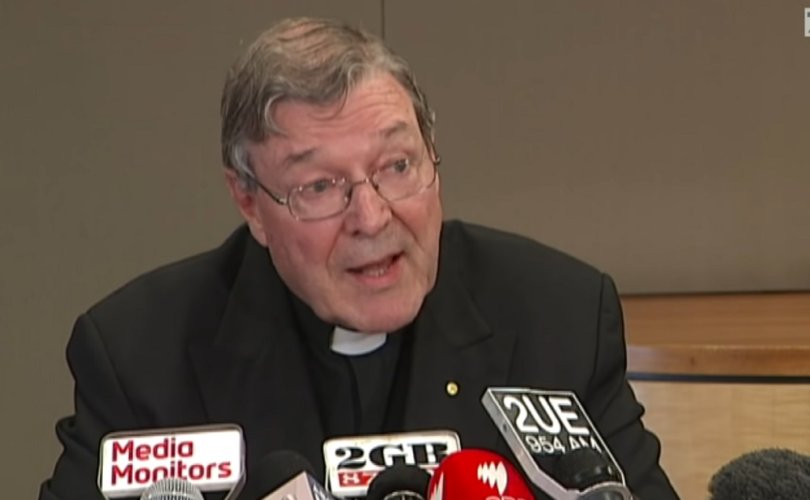 ROME, Italy, December 16, 2020 (LifeSiteNews) — An exonerated Australian cardinal stated today that he accepted his time in prison as “a gift and a grace.”

Cardinal George Pell, who was imprisoned on charges of child sexual abuse later struck down by Australia’s highest court, gave an online press conference today to answer questions about his new book. Prison Journal: Volume I, with an introduction by George Weigel, was published by Ignatius Press.

“God writes straight with crooked lines, and given that I was sentenced to jail, I do regard it as a gift and a grace,” Pell told reporters.

“I’d have to hasten to add that I still regret that it happened,” he continued.

“I wouldn’t have chosen it, but there I was and, please God, I did my Christian duty while I was in jail.”

In the hour-long press conference, the Australian cardinal said that “many, many good things” happened to him during his imprisonment. They included “the wonderful support” of his family and friends; the “decency and professionalism” of all the warders, some of whom were quite friendly; the letters he received, including from other prisoners; “intellectually stimulating” journal articles people sent him; and an excellent prison chaplain.

“I was impressed by the goodness of a lot of people,” Pell said.

The cardinal received good wishes even from his next-cell neighbor.

“The fellow who was in the cell next to me — he was a bit off his head, he’s a mass murderer. But on the morning that I was going for my appeal, he shouted out, wished me well,” the cardinal recalled.

“A very small thing, but it’s something for which I was very, very grateful.”

The press conference was introduced and moderated by the American author George Weigel, who said he had known the cardinal for 53 years. Weigel stated that although Pell’s book should never have been written, the fact that it was written was a “grace” and a “blessing.” Prison Journal will allow people who had never met the cardinal to meet the “full” George Pell instead of the “cartoon” Pell “perpetuated” by the Australian media.

“Even old friends will encounter depths of insight here that they might not have met before,” Weigel said.

“The book invites readers to meet the soul of a public man, which is a rare thing indeed, and all the more precious for its rarity,” he continued.

“Even more impressive is when we are allowed to meet a soul as it’s being purified and strengthened by suffering.”

Cardinal Pell revealed that he wrote his journal “partly as a historical record of a strange time.” More importantly, he thought his reflections might help people going through hard times. He also found it “good therapy”.

“As I said to somebody, I now understand why Solzhenitsyn wrote so much,” the cardinal said.

In Prison Journal, Pell wrote that he was aware of an obligation to forgive those who accused him. When asked by a reporter how people can “nourish” forgiveness, the cardinal indicated that prayer is key.

“First of all, you have to keep praying. Reading the Scriptures, reading your breviary, even going to Mass,” Pell said.

“The New Testament is always niggling away at us — much more than the Old Testament, reminding us of difficult challenges, like the challenge to forgive.”

The cardinal recalled from a marriage encounter meeting, long ago, that one couple talking about forgiveness between husband and wife said the most important thing was to “make an act of will to forgive and then, in many cases, the feelings follow behind.”

“I think you decide to forgive, and pretty well always the feelings will follow,” Pell declared.

“Every now and again, you may feel a surge of animosity, and I suppose you’ve just got to clamp down on it,” he added.

“But you can’t do that without faith, and I suspect you need to keep praying.”

When asked if there was anything he missed in prison life, Pell said at first that he had never thought about it, but then reminisced about his nightly cup of camomile tea and two rows of Cadbury chocolate. He mentioned having watched a lot of sports on television and at times feeling content and settled.

“My jail time doesn’t give me nightmares,” he assured reporters.

While he was in prison, Pell prayed for victims of pedophilia every day. Regarding the Church’s pastoral care of victims of clerical sexual abuse, Pell said that there had been “a renewed emphasis” on it since the Royal Commission into institutional responses to child sexual abuse. The current compensation panel is “scarcely different” from the one the cardinal himself set up in the Melbourne response in the mid-1990s.

“There have got to be counseling services available and, of course, financial reparations,” Pell stated.

“It’s a solemn obligation. We’ve got to do our best.  I think by and large we’re moving along in the right direction in Australia.”

He noted, however, that it was not sufficiently acknowledged in Australia that the Church had “broken the back” of the problem of clerical sexual abuse of children “by stopping the crimes substantially in the middle of the ’90s.” “Hardly any” of the cases examined by the recent Royal Commission were from the 21st century, and “most of them were from times earlier than the 1990s.”

Lisa Wheeler of Carmel Communications confirmed with LifeSiteNews, which has a reporter present at the event, that this was Cardinal Pell’s first press conference since he returned to Rome this autumn.