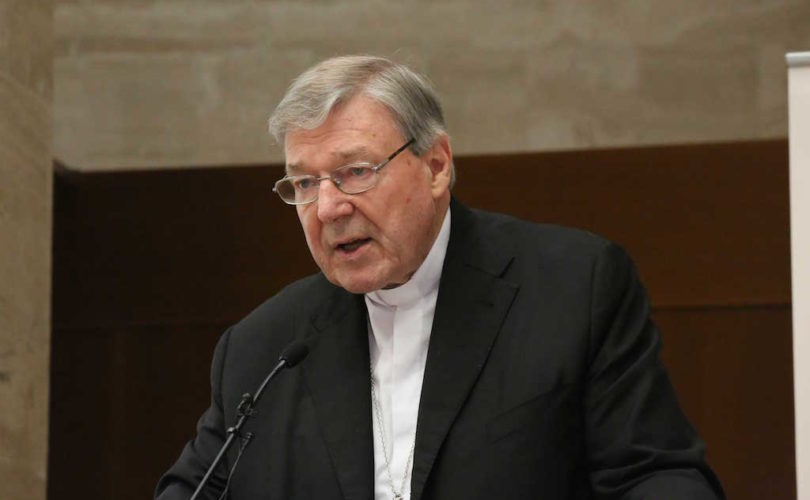 “How can you disagree with a question?” Pell said in reply to an inquiry about whether he agreed with the cardinals' questions.

Pell was speaking at St. Patrick’s Church in London, where he addressed the current state of Catholicism and a proper understanding of conscience.

“A number of regularly worshipping Catholics” are “unnerved by the turn of events” within the Church, Pell said, like the notion that individual conscience can trump moral law.

This question about the role of conscience is one of the many concerns theologians, bishops, and others have expressed in the wake of the papal exhortation Amoris Laetitia, which critics say contains passages that undermine or can be interpreted to undermine Catholic moral teaching. Four cardinals sent Pope Francis a dubia, or formal request, asking him to clarify whether parts of Amoris Laetitia are at odds with Catholic moral teaching. The pope has not yet responded.

Pell pointed out that “those emphasising 'the primacy of conscience' only seemed to apply it to sexual morality and questions around the sanctity of life,” the Catholic Herald reported. “People were rarely advised to follow their conscience if it told them to be racist, or slow in helping the poor and vulnerable, the cardinal said.”

“The idea that you can somehow discern that moral truths should not be followed or should not be recognised [is] absurd,” said Pell. “We all stand under the truth,” but objective truth may be “different from our understanding of the truth.”

Along with Cardinal Burke, Pell was recently removed from the Congregation for Divine Worship, the Vatican liturgy office.