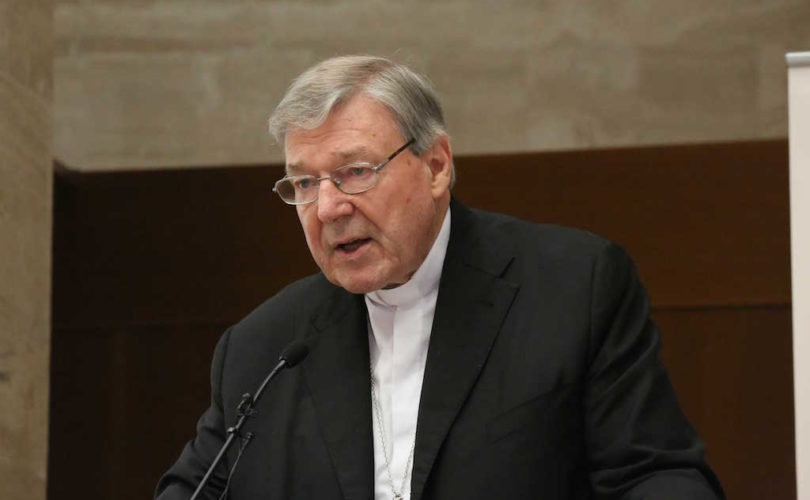 BALMAIN, New South Wales, Australia, April 12, 2019 (LifeSiteNews) – Australia’s top Catholic prelate was convicted of sexual abuse based on the testimony of his accuser, a testimony that bears a striking resemblance to a case published in Rolling Stone magazine, an Australian magazine editor has found.

“What is the difference between this account of child sex abuse in a Catholic church in Philadelphia and the evidence given by the sole accuser in the Victorian court case that convicted Cardinal George Pell of sexually abusing a 13-year-old choir boy at St. Patrick’s Cathedral, Melbourne, in 1996?” Windschuttle asked.

In his testimony against Philadelphia priest Charles Englehart, former altar boy Daniel Gallagher stated that the priest had caught him drinking altar wine in the church sacristy after serving Mass. Instead of being angry, Englehart gave him more wine and showed him pornographic magazines. A week later, the priest sexually abused Gallagher after Mass.

In Rolling Stone account, written by activist-journalist Sabrina Rubin Erdely, the victim was referred to as “Billy.”

In his testimony against Pell, the still unnamed witness said the future cardinal caught him and his (now deceased) friend drinking altar wine in the church sacristy after Mass. Pell then sexually abused one boy and then the other.

In the testimony published in the updated version of Cardinal: The Rise and Fall of George Pell, written by Louise Milligan, the alleged victims were referred to as “the Choirboy” and “the Kid.”

Calling the similarities “uncanny,” Windschuttle laid them out:

Windschuttle stated that the two stories were so “close to being identical that the likelihood of the Australian version being original is most implausible.” He also suggested that there were too many similarities for the likeness to be dismissed as “coincidence.”

The journalist concluded, therefore, that Pell’s surviving accuser (“the Kid”) had simply repeated a story he or someone else had found in the Australian edition of the Rolling Stone.

“In short, the testimony that convicted George Pell was a sham,” Windschuttle wrote.

“This does not mean the accuser was deliberately making it up. He might have come to persuade himself the events actually happened, or some therapist might have helped him ‘recover’ his memory,” he continued.

“But no matter how sincere the accuser’s beliefs were, that does not make them true, especially when there is so much other evidence against them.”

Pell, the former archbishop of Melbourne, was convicted in December 2018 of the sexual abuse of a minor. He was sentenced last month to six years in prison. The Cardinal has steadfastly maintained his innocence.

Windschuttle believes that until now no one in Australia who has either covered or investigated the Pell case has mentioned the Gallagher testimony against Fr. Englehart in the American case because of slipshod research (Milligan) or a desire to have Pell convicted (the police of the Australian state of Victoria).

There is an even older story that resembles the plaintiffs’ testimony against Fr. Engelhart and Cardinal Pell in one respect: the theme of stolen altar wine. In the 2008 film Doubt, Fr. Brendan Flynn (Philip Seymour Hoffman) is accused of having given an altar server wine to drink. When confronted, the priest says he caught the lad drinking altar wine.

The film, which left the priest’s guilt or innocence uncertain, was a critical success, receiving four Academy Award nominations. Including worldwide receipts, it has made more than $50 million to date.