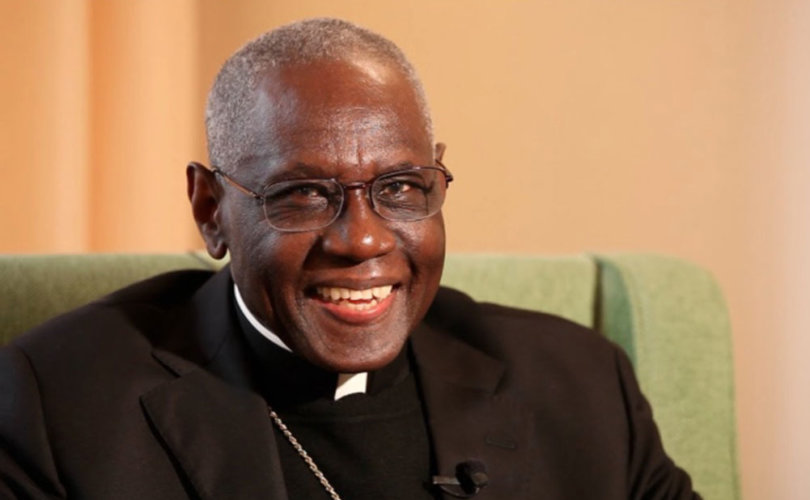 Depending on the source of the response, the cardinal’s message is either a misrepresentation of the high-profile Jesuit’s book calling for more Church openness to LGBT-identifying persons, or it’s an example of courage, charity and clarity on the Church’s teaching in the area of sexuality.

The Guinean cardinal’s op-ed includes the crucial fact that many have pointed out is absent in Father Martin’s book — that true Catholic ministry to homosexuals only occurs by way of the Catholic Church’s moral teaching.

“To love someone as Christ loves us mean to love that person in the truth,” Cardinal Sarah wrote.

The prefect of the Congregation for Divine Worship and the Discipline of the Sacraments also made another important point in his WSJ commentary with regard to the unchangeable nature of Church teaching and those who minister in Her name.

“Those who speak on behalf of the Church must be faithful to the unchanging teachings of Christ,” the cardinal said, “because only through living in harmony with God’s creative design do people find deep and lasting fulfillment.”

LGBT-identifying individuals are “are always good because they are children of God,” Cardinal Sarah also said, but of homosexuality he wrote it is “at odds with human nature.” Homosexual acts are “gravely sinful and harmful to the well-being of those who partake in them.”

“People who identify as members of the LGBT community are owed this truth in charity,” he said, “especially from clergy who speak on behalf of the Church about this complex and difficult topic.”

Martin was made a consultor to the Vatican’s Secretariat for Communications in April. In June, he released the book Building a Bridge: How the Catholic Church and the LGBT Community Can Enter into a Relationship of Respect, Compassion, and Sensitivity.

The book has received acclaim from liberal Catholics and the media, and it also had notable endorsements from newly appointed U.S. Cardinals Kevin Farrell and Joseph Tobin, along with San Diego Bishop Robert McElroy.

Father Martin’s public advocacy for LGBT issues predates his latest book release and his Vatican appointment, but it has become more pervasive since then.

He has been criticized for leaving the Church’s teaching on sexuality out of his advocacy of LGBT issues.

Cardinal Sarah agreed with Father Martin’s contention that there should not be a double standard for heterosexual and homosexual sexual sins.

But he also said it’s contrary to Christ’s “wisdom and goodness” to require something that cannot be achieved. Chastity is possible and a source of freedom, he said, with God’s grace and people’s perseverance

“We do not need to look far to see the sad consequences of the rejection of God’s plan for human intimacy and love,” Cardinal Sarah wrote. “The sexual liberation the world promotes does not deliver its promise.”

“Rather, promiscuity is the cause of so much needless suffering, of broken hearts, of loneliness, and of treatment of others as means for sexual gratification.” As a mother, the Church seeks to protect her children from the harm of sin, as an expression of her pastoral charity.”

Father Martin responded to Cardinal Sarah’s WSJ commentary in America Magazine, for which he is editor-at large.

While he called the cardinal’s column a step forward in dialogue, he said Cardinal Sarah “misses a few important points,” including a failure to acknowledge “the immense suffering that L.G.B.T. Catholics have felt at the hands of their church.”

Father Martin urged the cardinal to consider why the church’s teaching on homosexuality has been widely rejected by L.G.B.T. Catholics and their families.

And he rejected the assertion that he was a critic of the Church’s message in regard to sexuality.

“Cardinal Sarah’s op-ed inaccurately states that my book is critical of church teaching, which it is not,” Father Martin said. “Nor am I.”

Father Martin told Crux of the op-ed, “I would like to have heard something about the sad consequences of what happens when LGBT people are made to feel like second-class citizens, or worse, by clergy and members of the hierarchy.”

Papal biographer Austen Ivereigh tweeted about the op-ed, calling it “severely misrepresenting.” Ivereigh penned the controversial Crux column last month inferring that critics of Pope Francis who were Catholics may have been suffering from some sort of neurosis.

Commonweal contributing editor Massimo Faggioli found it “remarkable” that Cardinal Sarah “chose the WSJ to attack” the book endorsed by two other cardinals.

Faggioli also said he believes Cardinal Sarah “misrepresents” the book, “which in no way contradicts the teaching of the Catholic Church,” and the op-ed “ignores the need to listen to the experience of faithful LGBT Catholics who have not “received” church's teaching.”

Maggie Gallagher, author and co-founder of the National Organization for Marriage, posted on Facebook how “Within hours, Father James Martin responds to Cardinal Sarah's WSJ critique of his message.”

Sharing Father Martin’s America Magazine response on her page, Gallagher quoted him urging Cardinal Sarah to consider why LGBT-identifying Catholics reject the church’s teaching on homosexuality, and the Jesuit saying, 'The only way that the church will be able to answer that question is by listening to them, which is part of the bridge building I am calling for in my book,'”

Gallagher stated in reply, “The problem of course is that Father Martin appears to want to engage in listening to monologue. He doesn't seem to want the Faith to speak back.”

@Card_R_Sarah If you only knew how many Catholics are grateful to God for your clarity, courage, and priestly witness,” Coffin tweeted. “THANKS!”

“Cardinal Robert Sarah speaks with courage and charity about the Catholic Church’s pastoral care of persons who experience homosexual attraction in his column,” Father Murray wrote.

“The truth about homosexual inclination and homosexual activity is that they are not in accord with God’s created order, his plan for mankind,” he continued. “A desire to commit acts of sodomy is a bad desire that should be resisted because those acts are gravely disordered misuses of the sexual faculty.”

Father Murray, pastor of Holy Family Church in New York and regular guest on EWTN’s” The World Over,” said the accusation that the Church is cruel and un-Christlike in teaching that the homosexual inclination is an objective disorder is “regrettable.”

It’s not surprising coming from those who do not embrace Catholic truth on sexuality, Father Murray said, but, “That such a group includes Catholic priests such as Father Martin is a scandal.”

“The faithful can be easily misled when prominent priests claim that their opinions on this or that doctrinal matter are correct and that the Church’s teaching must change,” he stated. “Cardinal Sarah’s column today is a most welcome response to this misleading line of thought. The truth of Christ taught by his Church on human sexuality has not changed, and cannot change. Leading people to believe otherwise is a serious error.”

This assessment was echoed in The Stream by Joseph Sciambra, a Catholic who ministers to homosexuals and who himself has left the homosexual lifestyle.

“It’s a hopeful sign that some members of the Church hierarchy have heard the cry of the faithful,” he continued. “To be specific: Of those who live with same-sex attraction, who sought compassion, coherence, and truth in the Catholic Church. Too often we found only confusion and tacit or outright approval of homosexual acts as well as “gay marriage.”

Sciambra’s column was titled “The Church and Cardinal Sarah Love Gay People Enough Not to Lie to Us.”