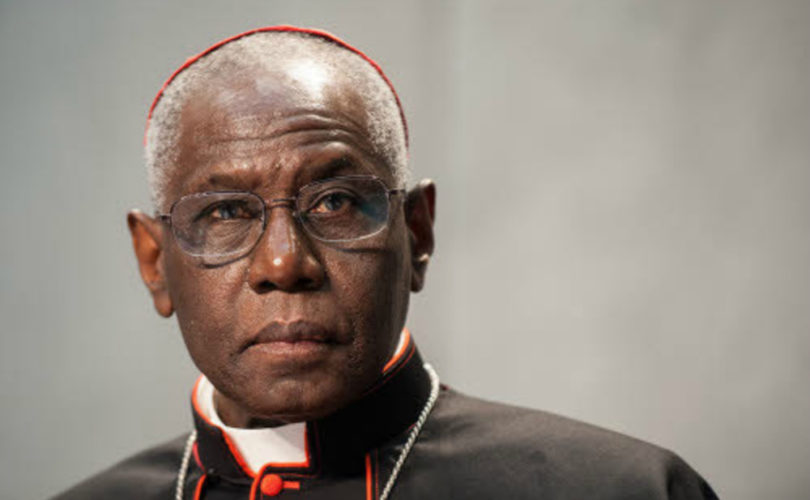 August 17, 2017 (LifeSiteNews) — Faced with gender ideology and the deliberate and methodical plan to destroy the traditional family, an “interior Vendée must arise in the heart of every family, of every Christian, of every man of good will!”

With this rousing call, Cardinal Robert Sarah, prefect of the Congregation for Divine Worship and the Discipline of Sacraments, has asked for a “revolt” against the new lies of the continuing revolution against God’s law. His call to prayer and action was made during a homily given during a Mass on August 12 in the foyer of the grandstand of France’s award-winning historical theme park, the Puy-du-Fou.

The Vendée is the region in Western France where an uprising took place during the Reign of Terror – the “Terreur” – in 1793 and 1794 when the leaders of the French Revolution conscripted ordinary men to serve in the revolutionary army and required Catholic priests to vow submission to the Civil Constitution of the Clergy and repudiate their commitment to obey the Pope.

For the faithful peasants of the Vendée, on whom the “missions” of Saint Louis-Marie Grignion de Montfort some 80 years back had left a profound mark, these requirements were unacceptable. They forced many nobles of the province to lead them into war with the new Republic, courageously fighting “for God and King” in an uneven battle that would culminate with the genocide of the Vendée. The Committee of Public Safety – the revolutionary government in Paris led by Robespierre – expressly ordered every man, woman and child from the province to be killed, their houses and villages to be destroyed, and the very earth of the province to be burned.

The reality of this fully-fledged genocide, truly a founding act of the French Revolution, was long negated in French politics and history books. The defeat of the Vendée would lead to its relegation in oblivion, or as French historian and specialist of the Vendée Reynald Secher puts it, to “memoricide.”

Cardinal Sarah’s visit to the diocese of Luçon in the Vendée, which this year celebrates the 700th anniversary of its founding, would not have been complete without a visit to the Puy-du-Fou theme park where Philippe de Villiers, former presidential candidate in France and visionary entrepreneur, created a profoundly original “sound and light show” 40 years ago presenting the history of a ruined castle in the form of a live cinematographic performance. Forty years later, the show has morphed into a spectacular embodiment of the history of the Vendée where several thousand volunteers act several times the week during the summer months, honoring the memory of the “Vendéens,” their forebears, especially in their uprising for their “God and King.”

The theme of the “Wars of the Vendée” is also present in the theme park that has grown into an international award-winning venture whose aim is to rekindle love for their homeland and for beauty in the hearts of the many millions of visitors who have come there over the years.

Cardinal Sarah certainly caught the spirit of the Puy-du-Fou in paying homage not only to those who have taken part in this unique cultural adventure but to the peasant warriors of the Vendée. Armed only with their “staffs, scythes, rosaries and the Sacred Heart” sewn on their coats, they stood up to fight and then, by their thousands, “died for their faith, for their churches and for their priests.”

“You give a voice to all those whom the ‘Terreu’ wanted to silence, because they refused the lie of atheistic ideology! You honor those whom it wanted to drown in oblivion, because they would not allow the liberty to believe and to offer Mass to be stripped from them!” the Cardinal said during his homily on Saturday evening.

“Your work is necessary! For our times seem to have been numbed! As we face the dictatorship of relativism, as we face a new thought terrorism that once again seeks to rip God from the hearts of children, we need to rediscover the freshness of mind, the joyful and fervent simplicity of these saints and these martyrs,” he preached, standing before the reliquary where the ring of Saint Joan of Arc reposes after having been providentially brought back from England last year by Philippe de Villiers to be honored in the Puy-du-Fou. Saint Joan’s ring had been taken to England in 1431 by Cardinal Henry Beaufort after she was burned at the stake in Rouen.

Cardinal Sarah insisted that even though death and martyrdom was the “Vendéens” lot, they were mysteriously victorious in that after the throes of the Revolution, Catholic priests in France were once again freely allowed to serve God without having to submit to the “lie of ideology” that had threatened to “reign supreme.”

He went on to speak of the present-day persecutions that stem from the atheistic “matrix” of the French Revolution, calling the all Christians and people of good will to accept and follow the heritage of the Vendée against new forms of totalitarianism.

“Even now, perhaps more than ever, the ideologues of the revolution want to annihilate the natural place for gift of self, of joyful generosity and of love! I am speaking of the family! Gender ideology, the contempt of fruitfulness and of fidelity are the new slogans of this revolution. Families have become the new Vendées to exterminate. Their disappearance is being methodically planned, as was that of the Vendée in the past,” said the African cardinal, particularly condemning modern-day attempts to force “sterilization, abortion, and contraception” on his home continent.

“These new revolutionaries are worried by the generosity of large families. They mock Christian families, because these embody everything that they hate. They are ready to attack Africa with new infernal columns in order to put pressure on families and to force on them sterilization, abortion and contraception. Africa, like the Vendée, will resist! Families everywhere must be the joyous spearheads of revolt against this new dictatorship of egoism! It is now in the heart of every family, of every Christian, of every man of goodwill that an interior Vendée must arise! Every Christian is, spiritually, a Vendéen!” said Cardinal Sarah, presenting today’s God-hating and man-hating ideology as every bit as violent and deadly as the violent killings of more than 200 years ago.

The Cardinal concluded that this uprising must be a peaceful one, founded in adoration and prayer and careful to uphold “forgiveness and mercy,” because “love only conquers the powers of death.”

The translation of the full text of his homily is available here.