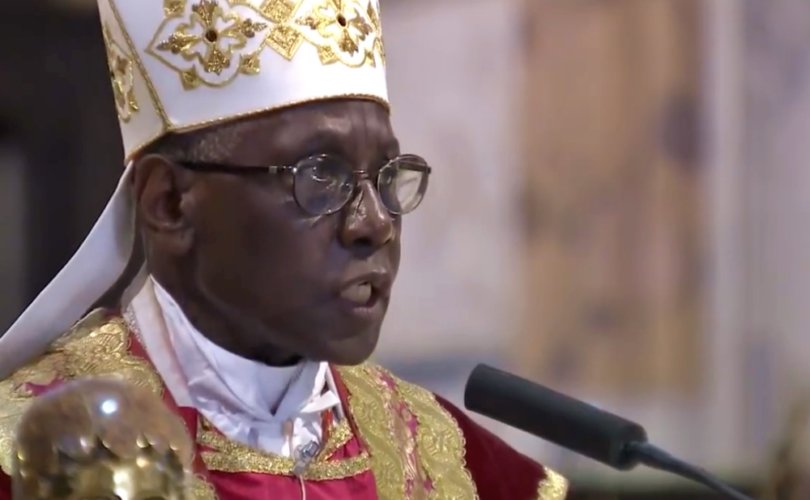 CHARTRES, France, May 22, 2018 (LifeSiteNews) – Ordaining married men to the Catholic priesthood would be a break with apostolic tradition, a leading Catholic prelate has said.

Robert Cardinal Sarah, prefect of the Congregation for Divine Worship and the Discipline of the Sacraments, said that “serious consequences” would arise in the Church if she were to admit married men of sound reputation, or “viri probati” into the priesthood.

Addressing the priests in a massive crowd that spilled out into the cathedral’s forecourt, the Guinean prelate begged them to remember the meaning of their celibacy:

“Dear fellow priests, always keep this certainty: to be with Christ on the Cross is what priestly celibacy proclaims to the world,” he said.

“The plan, again advanced by some, to detach celibacy from the priesthood by conferring the sacrament of the Order on married men (“viri probati”) for, they say, ‘pastoral reasons or necessities,’ would have serious consequences, in fact, to definitively break with the Apostolic Tradition,” he added.

Sarah intimated that ordaining married men would not “perpetuate” the priesthood of Christ.

“We would manufacture a priesthood according to our human dimension, but without perpetuating, without extending the priesthood of Christ, obedient, poor and chaste,” he said.

“Indeed, the priest is not only an “alter Christus”, but he is truly “ipse Christus”, he is Christ himself,” the Cardinal stated. “And that is why, following Christ and the Church, the priest will always be a sign of contradiction!”

Although the Catholic Church has allowed married Anglican ministers who have become Catholic to be ordained as priests, this has been a pastoral concession not intended to set a precedent for the western Church. Even in the eastern Church, celibacy is considered a superior state for a priest, freeing him to serve his flock with a whole heart: married priests in the eastern Church are not, for example, chosen as bishops.

In the dearth of vocations following the Second Vatican Council, Pope Francis has stated that the church has to consider ordaining married men to the priesthood.

While dismissing the idea of voluntary celibacy in the priesthood, the pontiff was open to the option of a married priesthood in remote areas where the priest shortage is especially serious.

“We have to think about if the viri probati are a possibility,” Pope Francis told German newspaper Die Zeit. “Then we also have to discern which tasks they can take on, for example, in forlorn communities.”

It is believed that Francis may give the Brazilian bishops in particular permission to ordain married men.

In his Chartres homily yesterday, Cardinal Sarah entreated the crowds to distinguish between the world they must love — the world of people, especially the poor, to be served — and the world which they must not love–the world “as it became under the rule of Satan and sin.”

He warned in particular against “the world of ideologies that deny human nature and destroy the family.”