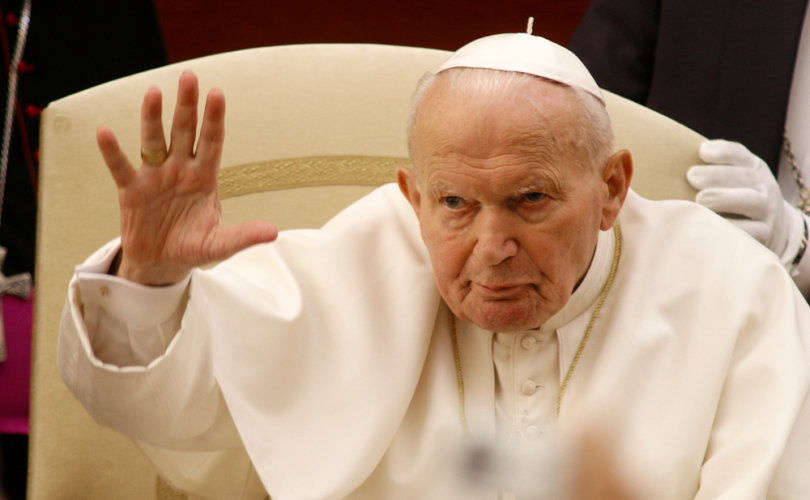 The cardinal also highlighted St. Teresa of Calcutta's reverence for the Eucharist, noting that she once said nothing brought her more sadness than Communion on the hand.

Sarah spoke Tuesday at the 2017 Sacra Liturgica conference in Milan about “the beauty, appropriateness, and pastoral value” of receiving Holy Communion kneeling and on the tongue. Sarah is the Prefect for the Congregation for Divine Worship, essentially making him the Vatican's liturgy chief.

“For if, as St Paul teaches, 'at the name of Jesus every knee should bow, in heaven and on earth and under the earth' (Phil. 2:10), how much more should we bend our knees when we come to receive the Lord himself in the most sublime and intimate act of Holy Communion!” said Sarah.

“A disposition of reverence and of awe is absolutely necessary before all things liturgical, before the privileged divine encounter that the liturgical rites facilitate,” Sarah explained.

The whole of the life of Karol Wotyla was marked by a profound respect for the Blessed Eucharist. Much could be said, and much has been written about this. Today I simply ask you to recall that at the end of his life of service, a man in a body wracked with sickness, John Paul II could never sit in the presence of the Blessed Sacrament. He forced his broken body to kneel. He needed the help of others to bend his knees, and again to stand. What more profound testimony could he give to the reverence due to the Blessed Sacrament than this, right up until his very last days.

He then quoted St. Teresa of Calcutta, an “exceptional nun, whose faith, holiness and total gift of her life to God and to the poor are world-renowned.”

St. Teresa “had absolute respect and worship for the Divine Body of Jesus Christ,” said Sarah. He noted that “she touched daily the 'flesh' of Christ in the dilapidated bodies of the poorest of the poor,” but “amazed and full of respectful veneration, she refrained from touching the transubstantiated Body of Christ.”

“Rather, she adored him,” Sarah continued. “She contemplated him silently. She knelt and prostrated herself before Jesus in the Eucharist. And she received him, like a little child who is humbly nourished by his God. She was saddened and pained to see Christians receive Holy Communion in their hands.”

The cardinal recounted Mother Teresa's own words: “Wherever I go in the whole world, the thing that makes me the saddest is watching people receive Communion in the hand.”

The reception of Communion on the hand was allowed as an exception to the norm of Communion kneeling and on the tongue. It began in the 1960s, with some dioceses implementing it without permission from the Vatican. In 1969, the Congregation for Divine Worship issued a document titled Memoriale Domini. It stated:

Indeed, in certain communities and in certain places this practice [of Communion in the hand] has been introduced without prior approval having been requested of the Holy See, and, at times, without any attempt to prepare the faithful adequately…

…[The] method of distributing holy communion [kneeling and on the tongue] must be retained, taking the present situation of the Church in the entire world into account, not merely because it has many centuries of-tradition behind it, but especially because it expresses the faithful's reverence for the Eucharist. The custom does not detract in any way from the personal dignity of those who approach this great sacrament: it is part of that preparation that is needed for the most fruitful reception of the Body of the Lord.

In 2015, a Spanish man named Abel Azcona stole 242 consecrated hosts and used them to write “Pederasty” in Spanish as a form of “art.” It seems he did this by receiving Holy Communion in the hand and then pocketing the Eucharist rather than consuming it. His Twitter account features a photo of him “collecting” Communion by taking it on the hand.

“Satanism seems to be on the rise throughout the West, but many people naively still hold on to the idea that 'black masses' and such are things that really don’t happen, that they are legends, that they are only in movies, etc. No. They do happen,” wrote canon lawyer Father Bryan Jerabek in response to the satanic “black mass” that caused controversy at Harvard. “And the reception of Holy Communion in the hand makes it even easier – and more common – for people to steal the host and use it for such nefarious purposes.”

At such satanic rituals, “there is always a satanic priest officiating who wears blasphemous vestments, an altar represented by a nude woman, possibly a virgin, on whom very serious acts of profanity of the Eucharist (usually stolen from a church), are performed,” according to the late Vatican chief exorcist Father Gabrielle Amorth. He wrote this in his last book, An Exorcist Explains the Demonic. These hosts are “stolen from tabernacles or taken by some of the faithful at Communion during Mass and not consumed.”

Sarah said he prays “intensely for all those who have the patience and will take the time to read” his new book, The Power of Silence.

“May God enable them to forget the vulgarity and baseness with which some people have spoken of the 'Preface' and of its author, Pope Benedict XVI,” he said. “The arrogance, the violence of language, the disrespect and the inhuman contempt for Benedict XVI are diabolical and cover the Church with a mantle of sadness and shame.”

“These people demolish the Church and its profound nature,” he continued. “A Christian does not fight anyone. A Christian has no enemy to defeat. Christ asks Peter to put his sword into his scabbard (cf. Mt 26: 52-53). This is the command of Christ to Peter, and it concerns every Christian worthy of the name.”

Purpose of Vatican II wasn't to create a new church

Sarah's talk focused on the “necessity” of prioritizing worship.

“The necessity of giving acts of worship priority can be misunderstood or even ridiculed both by those outside of the Church, and are even questioned by some of those within,” he said. Understanding who Jesus Christ is, how we encounter Him, and what a Christian is will help Catholics to understand the importance of the sacred liturgy.

Sarah reiterated his call for priests to offer Mass ad orientem, or “facing east,” with the priest facing the tabneracle and cross with his congregation:

What is this turning to the east and beholding Christ face to face? It is the very life into which the new member of the Church has been initiated. It is the ecclesial worship of Christ, our Lord and God: the Sacred Liturgy. Standing together with his or her brothers and sisters in an attitude of worship and adopting a common and profoundly meaningful physical posture (facing east) the neophyte takes his or her place as a Christian, as a part of the ecclesia at worship.

I have spoken many times about the importance of recovering this orientation, of facing east in the celebration of the liturgy today, and I maintain what I have said on those occasions. Here I would simply note that in these words of Saint Ambrose we can see something more of the power, the beauty, and indeed of the purpose of facing east, of being united as the Church turned toward the Lord in worship, to behold Christ “face to face”.

The cardinal also explained why the Mass can't be changed or its rubrics ignored based on a priest's personal preference or desire to experiment:

The liturgy is not, therefore, the individual — priest or member of the faithful — or the group celebrating the liturgy, but the liturgy is primarily God’s action through the Church which has her own history, her rich tradition and her creativity. This universality and fundamental openness, which is proper to the whole of the liturgy, is one of the reasons why it cannot be conceived of or modified by the individual community or by experts, but must be faithful to the forms of the universal Church.

“The liturgy is not drawn up anew every time there is a development in ecclesiology,” said Sarah. “The Church before the [Second Vatican] Council and the Church after it are not two separate entities. The Council did not call for rupture, but for development and enrichment. Where there has been rupture it must be healed—not to satisfy some esoteric scholarly desires, but for the good of souls.”

The Sacra Liturgica conference posted Sarah's remarks on its Facebook page in a series of posts.