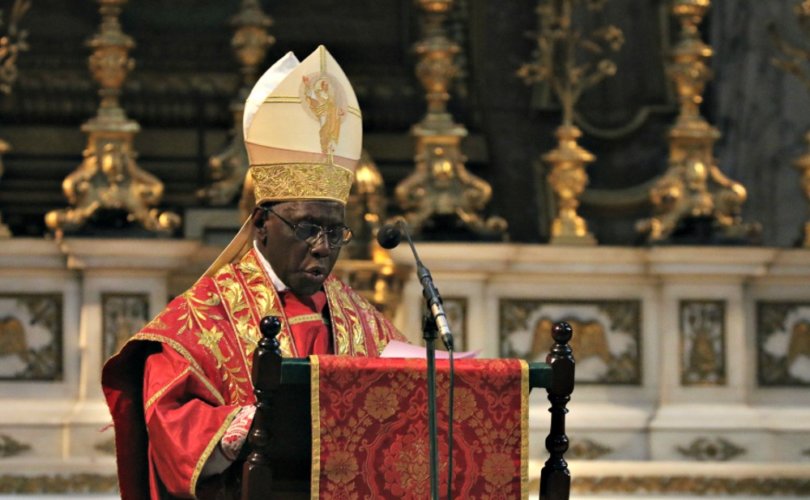 ROME, February 22, 2018 (LifeSiteNews) — The head of the Vatican department overseeing liturgy is summoning the Catholic faithful to return to receiving Holy Communion on the tongue and kneeling.

In the preface to a new book on the subject, Cardinal Robert Sarah, Prefect of the Congregation for Divine Worship, writes: “The most insidious diabolical attack consists in trying to extinguish faith in the Eucharist, by sowing errors and fostering an unsuitable way of receiving it. Truly the war between Michael and his Angels on one side, and Lucifer on the other, continues in the hearts of the faithful.”

“Satan’s target is the Sacrifice of the Mass and the Real Presence of Jesus in the consecrated Host,” he said.

The new book, by Don Federico Bortoli, was released in Italian under the title: ‘The distribution of Communion on the hand: a historical, juridical and pastoral survey’ [La distribuzione della comunione sulla mano. Profili storici, giuridici e pastorali].

Recalling the centenary of the Fatima apparitions, Sarah writes that the Angel of Peace who appeared to the three shepherd children in advance of the Blessed Virgin’s visit “shows us how we should receive the Body and the Blood of Jesus Christ.” His Eminence then identifies the outrages by which Jesus is offended today in the Holy Eucharist, including “so-called ‘intercommunion.’”

Sarah goes on to consider how faith in the Real Presence “can influence the way we receive Communion, and vice versa,” and he proposes Pope John Paul II and Mother Teresa as two modern saints whom God has given us to imitate in their reverence and reception of the Holy Eucharist.

“Why do we insist on receiving Communion standing and on the hand?,” the Prefect of the Congregation for Divine Worship asks. The manner in which the Holy Eucharist is distributed and received, he writes, “is an important question on which the Church today must reflect.”

Here below, with the kind permission of La Nuova Bussola where the preface was first published, we offer our readers a LifeSiteNews translation of several key extracts from Cardinal Sarah’s text.

Providence, which disposes all thing wisely and sweetly, has offered us book The Distribution of Communion on the hand, by Federico Bortoli, just after having celebrated the centenary of the Fatima apparitions. Before the apparition of the Virgin Mary, in the Spring of 1916, the Angel of Peace appeared to Lucia, Jacinta and Francisco, and said to them: “Do not be afraid, I am the Angel of Peace. Pray with me.” (…) In the Spring of 1916, at the third apparition of the Angel, the children realized that the Angel, who was always the same one, held in his left hand a chalice over which a host was suspended. (…) He gave the holy Host to Lucia, and the Blood of the chalice to Jacinta and Francisco, who remained on their knees, saying: “Take and drink the Body and Blood of Jesus Christ, horribly outraged by ungrateful men. Make reparation for their crimes and console your God.” The Angel prostrated himself again on the ground, repeating the same prayer three times with Lucia, Jacinta and Francisco.

The Angel of Peace therefore shows us how we should receive the Body and the Blood of Jesus Christ. The prayer of reparation dictated by the Angel, unfortunately, is anything but obsolete. But what are the outrages that Jesus receives in the holy Host, for which we need to make reparation? In the first place, there are the outrages against the Sacrament itself: the horrible profanations, of which some ex-Satanist converts have reported and offer gruesome descriptions. Sacrilegious Communions, not received in the state of God’s grace, or not professing the Catholic faith (I refer to certain forms of the so-called “intercommunion”), are also outrages. Secondly, all that could prevent the fruitfulness of the Sacrament, especially the errors sown in the minds of the faithful so that they no longer believe in the Eucharist, is an outrage to Our Lord. The terrible profanations that take place in the so-called ‘black masses’ do not directly wound the One who in the Host is wronged, ending only in the accidents of bread and wine.

Of course, Jesus suffers for the souls of those who profane Him, and for whom He shed the Blood which they so miserably and cruelly despise. But Jesus suffers more when the extraordinary gift of his divine-human Eucharistic Presence cannot bring its potential effects into the souls of believers. And so we can understand that the most insidious diabolical attack consists in trying to extinguish faith in the Eucharist, by sowing errors and fostering an unsuitable way of receiving it. Truly the war between Michael and his Angels on one side, and lucifer on the other, continues in the hearts of the faithful: Satan’s target is the Sacrifice of the Mass and the Real Presence of Jesus in the consecrated Host. This robbery attempt follows two tracks: the first is the reduction of the concept of ‘real presence.’ Many theologians persist in mocking or snubbing the term ‘transubstantiation’ despite the constant references of the Magisterium (…)

Let us now look at how faith in the real presence can influence the way we receive Communion, and vice versa. Receiving Communion on the hand undoubtedly involves a great scattering of fragments. On the contrary, attention to the smallest crumbs, care in purifying the sacred vessels, not touching the Host with sweaty hands, all become professions of faith in the real presence of Jesus, even in the smallest parts of the consecrated species: if Jesus is the substance of the Eucharistic Bread, and if the dimensions of the fragments are accidents only of the bread, it is of little importance how big or small a piece of the Host is! The substance is the same! It is Him! On the contrary, inattention to the fragments makes us lose sight of the dogma. Little by little the thought may gradually prevail: “If even the parish priest does not pay attention to the fragments, if he administers Communion in such a way that the fragments can be scattered, then it means that Jesus is not in them, or that He is ‘up to a certain point’.”

The liturgy is made up of many small rituals and gestures — each of them is capable of expressing these attitudes filled with love,  filial respect and adoration toward God. That is precisely why it is appropriate to promote the beauty, fittingness and pastoral value of a practice which developed during the long life and tradition of the Church, that is, the act of receiving Holy Communion on the tongue and kneeling. The greatness and nobility of man, as well as the highest expression of his love for his Creator, consists in kneeling before God. Jesus himself prayed on his knees in the presence of the Father. (…)

In this regard I would like to propose the example of two great saints of our time: St. John Paul II and St. Teresa of Calcutta. Karol Wojtyła’s entire life was marked by a profound respect for the Holy Eucharist. (…) Despite being exhausted and without strength (…) he always knelt before the Blessed Sacrament. He was unable to kneel and stand up alone. He needed others to bend his knees and to get up. Until his last days, he wanted to offer us a great witness of reverence for the Blessed Sacrament. Why are we so proud and insensitive to the signs that God himself offers us for our spiritual growth and our intimate relationship with Him? Why do not we kneel down to receive Holy Communion after the example of the saints? Is it really so humiliating to bow down and remain kneeling before the Lord Jesus Christ? And yet, “He, though being in the form of God, […] humbled himself and became obedient unto death, even death on a cross” (Phil 2: 6-8).

St. Mother Teresa of Calcutta, an exceptional religious who no one would dare regard as a traditionalist, fundamentalist or extremist, whose faith, holiness and total gift of self to God and the poor are known to all, had a respect and absolute worship of the divine Body of Jesus Christ. Certainly, she daily touched the “flesh” of Christ in the deteriorated and suffering bodies of the poorest of the poor. And yet, filled with wonder and respectful veneration, Mother Teresa refrained from touching the transubstantiated Body of Christ. Instead, she adored him and contemplated him silently, she remained at length on her knees and prostrated herself before Jesus in the Eucharist. Moreover, she received Holy Communion in her mouth, like a little child who has humbly allowed herself to be fed by her God.

The saint was saddened and pained when she saw Christians receiving Holy Communion in their hands. In addition, she said that as far as she knew, all of her sisters received Communion only on the tongue. Is this not the exhortation that God himself addresses to us: “I am the Lord your God, who brought you up out of the land of Egypt. Open your mouth wide, and I will fill it”? (Ps 81:10).

Why do we insist on receiving Communion standing and on the hand? Why this attitude of lack of submission to the signs of God? May no priest dare to impose his authority in this matter by refusing or mistreating those who wish to receive Communion kneeling and on the tongue. Let us come as children and humbly receive the Body of Christ on our knees and on our tongue. The saints give us the example. They are the models to be imitated that God offers us!

But how could the practice of receiving the Eucharist on the hand become so common? The answer is given to us — and is supported by never-before-published documentation that is extraordinary in its quality and volume — by Don Bortoli. It was a process that was anything but clear, a transition from what the instruction Memoriale Domini granted, to what is such a widespread practice today (…) Unfortunately, as with the Latin language, so also with a liturgical reform that should have been homogeneous with the previous rites, a special concession has become the picklock to force and empty the safe of the Church’s liturgical treasures. The Lord leads the just along ‘straight paths’ (cf. Wis. 10:10), not by subterfuge. Therefore, in addition to the theological motivations shown above, also the way in which the practice of Communion on the hand has spread appears to have been imposed not according to the ways of God.

May this book encourage those priests and faithful who, moved also by the example of Benedict XVI — who in the last years of his pontificate wanted to distribute the Eucharist in the mouth and kneeling — wish to administer or receive the Eucharist in this latter manner, which is far more suited to the Sacrament itself. I hope there can be a rediscovery and promotion of the beauty and pastoral value of this method. In my opinion and judgment, this is an important question on which the Church today must reflect. This is a further act of adoration and love that each of us can offer to Jesus Christ. I am very pleased to see so many young people who choose to receive our Lord so reverently on their knees and on their tongues. May Fr. Bortoli’s work foster a general rethinking on the way Holy Communion is distributed. As I said at the beginning of this preface, we have just celebrated the centenary of Fatima and we are encouraged in waiting for the sure triumph of the Immaculate Heart of Mary that, in the end, the truth about the liturgy will also triumph.