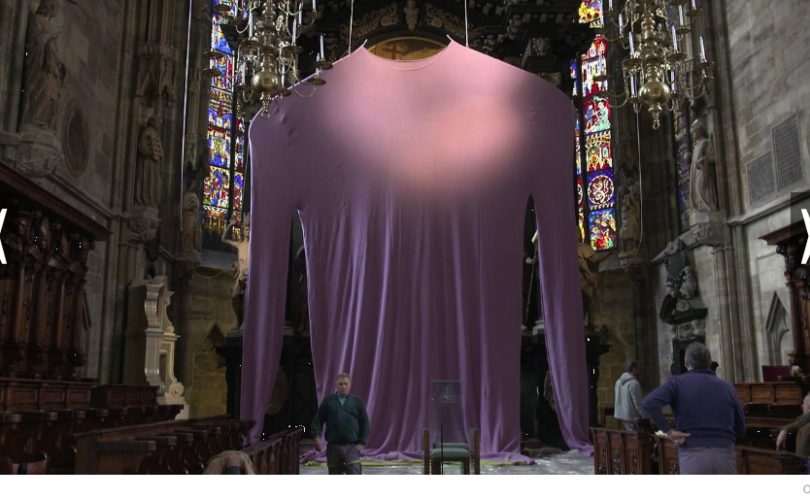 VIENNA, Austria, February 21, 2020 (LifeSiteNews) – For Lent, the high altar of St. Stephen’s Cathedral in Vienna, Austria, where Cardinal Christoph Schönborn is archbishop, is covered in a larger-than-life feminine purple sweater.

The sweater, consisting of 80 square meters of material, supposedly shows “the priority of warming love of neighbor,” according to the website of the cathedral parish. The cathedral parish claims the sweater is a modern Lenten veil (Fastentuch).

Austrian artist Erwin Wurm is responsible for the sweater. He has also created works that depict naked photographs of men with genitals showing in varying poses.

On Wurm’s website, he presents photos of a number of middle-aged naked men as part of his series De Profundis. The Austrian artist painted over some of those photos in order to cover the genitalia. In other photos, they can be seen partially. One photo is painted over around the upper body of the man, with the genitalia being clearly and fully visible.

Apart from the sweater, other art projects by Wurm are currently presented in St. Stephen’s Cathedral, a church that goes back to the 12th century.

One of the works is a gray, life-sized statue of a man without head, hands, or lower legs.

“A man without head and hands, bodies that are only defined by a briefcase or a handbag, or can only be experienced as packaged sausages, offer a mirror of conscience and the potential for questioning one’s own freedom and its restrictions,” the Cathedral stated on its website.

“Deformed buildings and objects open new perspectives on the power and possibility of our renewal from faith. How much of goodwill and, contrary to that, relapse into old patterns of behavior do we experience in our own lives? The violence, too, which was not only inflicted on the martyrs of National Socialism, leaves life shaken and deformed,” it continued.
Outside the cathedral, a sculpture of a hot-water bag standing on two feet can be seen. The plan was to place it in front of the main entrance, but since this is public land, the local government objected, as reported by Vienna Online. Now, the object is placed on church-owned land.

As explained by the Liturgical Arts Journal, “in order to prepare themselves to live the great mystery of the death and resurrection of Christ, Christians not only fasted from food but also practiced an auditory and visual fast.”

Many Catholic parishes still follow the practice of veiling crosses and statues during Lent while refraining from using flowers on the altar. Visual privation traditionally included a Lenten veil at the front of the church, reminding the faithful of the veil in the temple of Jerusalem. The faithful were not able to see the priest saying Mass on the other side of the veil.

The Liturgical Arts Journal pointed out that Martin Luther, “who detested the idea of Lent and of penance, tried to make the Fastentuch disappear in all of Germany.” Over time, the use of Lenten veils largely disappeared.

“Curiously, this ancient tradition reappeared vigorously beginning in 1974, when the charitable association Misereor had the idea of producing a Fastentuch to give concrete expression to Christians’ Lenten efforts. This initiative has a certain impact all over Germany, leading to the rediscovery of this tradition, the restoration of numerous historic veils that slept in the vaults of cathedrals or museums, and their suspension in sanctuaries once more. There was so much interest that even the Lutherans were moved to put them up!” the journal continued.

In recent years, various modern art projects were presented in the cathedral of Vienna under the guise of being a Lenten veil. Some of them resembled a veil not even remotely.

In 2015, an artist had connected a large amount of ribbon into cubes, which were then placed in front of the high altar during Lent. Catholics were encouraged to write down prayer intentions and tie them to the ribbons.

The Lenten veil of 2018 simply showed drawings, although it was impossible to tell what they were supposed to depict.

“In the individual pictorial elements of the Lenten veil, abstract black silhouettes are artistically implemented in embroidery technique. It certainly requires the patience of meditative contemplation, just as the Psalms only make the real meaning of the text comprehensible through patience in reading and listening,” the cathedral parish commented.

“Not one-dimensional classifications become visible, but always new thought-provoking impulses, which remain fragile in the end – just like life itself. The original reason behind this is symbolically recognizable with the biblical Alpha and Omega, the beginning and end,” the website of the parish added cryptically.