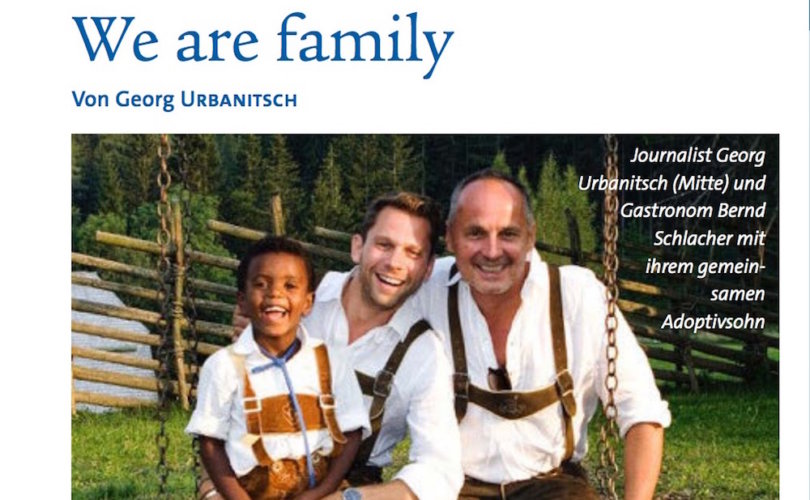 VIENNA, October 11, 2016 (LifeSiteNews) – In a fall bulletin devoted to Amoris Laetitia, the cathedral of the Archdiocese of Vienna has profiled a homosexual couple with their adopted son as an alternative form of family.

The news, first reported by German news agency Kath.net on September 30, raises concern in particular because the archbishop of Vienna is Cardinal Christoph Schönborn, whom Pope Francis has specifically indicated as an authoritative interpreter of his exhortation. The pope not only selected Schönborn to present Amoris Laetitia at the Vatican press conference on the day of its release, but later told reporters to look to Schönborn’s interpretation of the document.

The cathedral bulletin features an article titled “We are family,” authored by one of the two “dads,” Georg Urbanitsch, a former anchor of Austria’s public TV channel “Ö3.” Urbanitsch lives with Viennese restaurant proprietor Bernd Schlachter, with whom he entered a civil union in 2012. In 2014 they adopted a South African son together.

The son was baptized in the Parish of St. Stephen in Vienna, Cardinal Schönborn’s cathedral. The sacrament was administered by parish priest Father Toni Faber, as Kath.net reports.

Amoris Laetitia takes up the most space in the fall bulletin, titled “To grow in Love.” Various authors explain their take on partnerships, marriages, and family. The homosexual couple is one of them.

“Rainbow family, modern family, unconventional family…there are many titles for our fine nest of sanctuary. But we are not so special, we, that is: daddy Bernd, Papi Georg, and son Siya,” writes Urbanitsch. “Our evening ritual is always the same. We read a book, pray, talk about what was good about the day, and sing lullabies. Pretty unspectacular really.”

The article closes with Urbanitsch revealing the couple’s plan to adopt another child: a three-year-old girl from Johannesburg, South Africa.

LifeSiteNews has contacted the Archdiocese of Vienna but received no reply as yet.