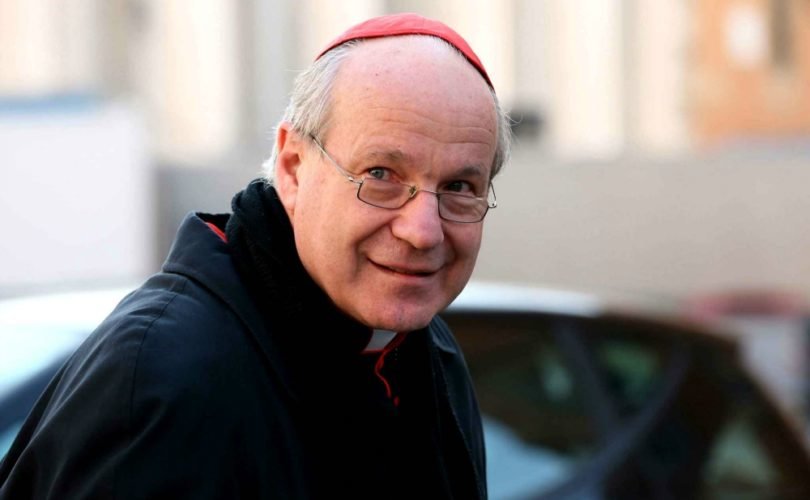 ROME, October 9, 2015 (LifeSiteNews) –Thursday, October 8, saw a surprise for the Synod of Bishops on the Family, when the Synod Secretariat announced that the only German-speaking discussion group among the 13 discussion groups (circuli minores) is not, as was expected, to be led by the head of the Congregration for the Doctrine of the Faith, Cardinal Gerhard Müller. Instead, it was Austrian Cardinal, Christoph Schönborn, who was elected by the other Synod fathers of the group to become their moderator. Archbishop Heiner Koch, Berlin, was elected to be the relator of the group.

Additionally, several other high-ranking members of this discussion group are also well known to have similar leanings: Cardinal Walter Kasper himself, Cardinal Reinhard Marx; and Bishop Franz-Josef Bode. In this group are also three non-voting members with similar leanings: the married couple Aloys and Petra Buch, as well as Professor Michael Sievernich, S.J. This Professor of Pastoral Theology who is the editor of some of Pope Francis' writings in German, went on record in 2013 with the following comment on with regard to extramarital and same-sex relationships:

So that there is no misunderstanding There is no question at all that there should be appropriate legal arrangements for other relationships which are not marriage. It is, rather, problematic to use an equalizing rhetoric which semantically is imposing and which levels down the difference between marriage and other forms and which therefore makes unequal things equal.

Aloys Buch is a proponent of the “Kasper proposal” as he himself showed when recently giving an interview to the official website of the German Bishops' Conference, katholisch.de. When asked about the situation of “remarried” divorcees with regard to the Sacraments, Buch answered:

When people say: “My first marriage was valid; it should not be declared null and void, but I cannot change my current situation [in a second civil marriage]” – then this is a remarkable statement. And often they want nevertheless continue to live in our Church and with their Sacraments, in a fully reconciled way. That is indeed a witness to the Faith as expressed by remarried divorcees that should be taken seriously.

Next to these explicitly “progressive” members of the German-speaking group, there are also some members who have taken prominent stances in defense of the Church's traditional teaching on marriage, such as the Swiss Curial Cardinal Kurt Koch and Gregoire III. Laham, the Greek-Melkite Patriarch of Antioch.

Patriarch Laham is said to just have resisted the claim made on Monday at the plenary session of the Synod that the Catholic Church may allow divorce. His response was strong and he made the following statement: “Jesus corrected Moses [with regard to divorce]. Dissoluble marriage is against nature.”

Moreover, in March 2015 Cardinal Koch spoke out against the arguments of Cardinal Marx and Bishop Bode – both members of the same Synod group – who argued that the Church must tbend to the “life realities” of Catholics of today. Koch responded with a reference to the German Protestants during the Third Reich who adapted to the spirit of the time, saying “We have to differentiate very carefully here and listen with sensitivity to the signs of the times – and to the spirit that reveals itself in these signs: Which ones are signs of the Gospel, which ones are not?”

In spite of the theological opposition between the members of the German-speaking group, the work in the first week of the Synod seems to have been constructive and calm, according to Cardinal Schönborn in a 9 October interview with the German branch of Vatican Radio. Even though the media had expected – “when reading the names of the five Cardinals” – that there would be conflict and intense struggle in this group, “it was not the case”, said the Cardinal from Vienna, Austria. And he concluded: “Perhaps it was because of the fact that in the first part of the Synod document [Intrumentum Laboris] is an analysis of reality in which we live and in this regard, there certainly exists much unanimity.”

Cardinal Schönborn’s naïve pipedream about stability in the gay lifestyle