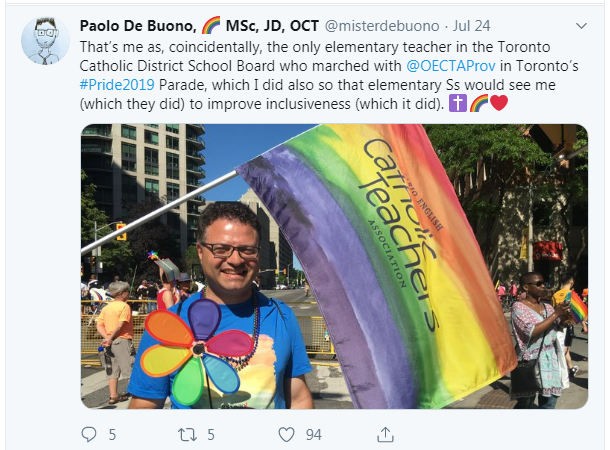 TORONTO, February 21, 2020 (LifeSiteNews) — Campaign Life Coalition is renewing its call to Toronto Cardinal Thomas Collins to fire the Catholic elementary teacher who boasted about reading pro-LGBTQ and pro-transgender books to his Grade 5 and 6 students and then defended his actions this week in local media.

Canada’s national pro-life, pro-family political lobbying group is also renewing its plea to Collins to use his authority to repeal the Toronto Catholic District School Board (TCDSB) policy adding “family and marital status, gender identity and gender expression” to its code of conduct.

That policy was Paulo De Buono’s justification for tweeting that he would be reading Sparkle Boy, The Boy who Cried Fabulous, A Tale of Two Mommies, and A Tale of Two Daddies to his 10- and 11-year-old students.

De Buono, who teaches at St. James Catholic School in northwest Toronto, has organized a petition in his defense, telling Global News Toronto Morning Show on Wednesday that “it’s OK to be gay in a Catholic school.”

Moreover, De Buono seemed to suggest that if his employer, the Toronto Catholic District School Board (TCDSB), doesn’t start treating LGBTQ students better, it doesn’t deserve to be publicly funded.

The TCDSB is one of the largest publicly funded school boards in the world, with more than 91,000 students in 195 schools, and De Buono makes about $102,500 a year.

“We need to show that we are responsible with human rights,” asserted the LGBTQ activist.

“And when it comes to LGBTQ student rights, that’s an area we really have to step forward in for the sake of our own survival,” added De Buono.

“And I’m quite sure about this, in terms of my confidence, that I think that if we can’t improve that, then perhaps we don’t deserve to be a separate school system.”

De Buono has since tweeted that he believes it’s “evil” to use Catholicism “as a cover for homophobia.”

He also took a swipe on Twitter at the purported “Catholic lens” through which such issues are to be taught in Catholic schools — a notion of which Campaign Life is also critical.

De Buono claimed that in the absence of Catholic resources he has to rely on PFLAG — Parents, Family, and Friends of Lesbians and Gays — which is notoriously pro-homosexual.

If you look carefully, you’ll see my @pflagcanada bracelet on my left arm. Catholic educators are told to use a “Catholic lens” but there are virtually no related resources from Catholic ed orgs for Catholic educators. PFLAG nationally or locally is a good resource. https://t.co/pD6nFI93Vh

Support from like-minded individuals has poured in for De Buono.

Same here. If you are doing the right thing, persecution is given. Look at what was done to Jesus and many believers after him. You are in good company.

Michael Way Skinner, another LGBTQ activist Catholic teacher who operates in the York Catholic District School Board, compared De Buono with Jesus, although it seems at this point his “persecution” is more apparent than real.

Wells is the driving force behind the current bill to criminalize reparative therapy, and according to Christian psychotherapist Dr. Ann Gillies, he has a specific agenda to silence Christian churches.

He told Global News that Campaign Life Coalition has also targeted him, which he described as “well known as an anti-LGBTQ organization, many would frame them as a hate group.”

Wells regarded it as “just really quite shocking that here they would be targeting a teacher in a classroom,” he said.

But all of this vindicates Campaign Life Coalition’s claim that Cardinal Collins needs to take action and fire De Buono, says the group’s director of political operations, Jack Fonseca.

“There’s not a snowball’s chance in hell that Mr. De Buono is merely teaching children that homosexual marriage is legal in Canada, and also telling them in no ambiguous terms that to engage in such a lifestyle is a sin which every Catholic must avoid,” he told LifeSiteNews in an email statement.

“De Buono is openly rejecting Catholic moral teaching. And far worse than that, he is teaching his students to do the same.”

Fonseca said he expects the TCDSB will avoid dealing with “this very well-paid troublemaker” and “sidestep its responsibility by falsely claiming that it has ‘no choice’ and must follow the laws, including the recently amended Code of Conduct.”

But “that would be a bald-faced lie,” maintains Fonseca.

Ontario Catholic school boards and Catholic bishops can invoke Section 93 of the Constitution Act of 1867 “to reject any provincial law or regulation which adversely affect the content of faith and morals,” he pointed out.

And the Supreme Court of Canada “has twice confirmed that the constitutional right of Catholics schools in Ontario is ‘absolute’ in this regard, and is not subject to a Charter challenge,” he said.

However, the archdiocese reportedly green-lighted the TCDSB adding the terms “family and marital status, gender identity and gender expression” its code of conduct, according to a board report appended to the agenda the night the trustees voted 8-4 for the change.

During a months-long bitter battle, proponents for the change argued the board had to comply with ministry directive PPM 128 to align its code with the provincial and the Ontario Human Rights codes, both of which include the four terms.

Opponents argued that gender ideology contradicts Catholic teaching and is harmful to children, that Catholics have a constitutional right to teach their faith in their schools, and warned changing the code would give LGBTQ activists cover to actively promote views of human sexuality contrary to Catholic teaching in Catholic schools.

Four days after the vote, the archdiocese issued a statement conceding the terms were added to the code as mandated by PPM 128, but adding: “While the archdiocese recognizes that terms such as gender identity are included in the Code, we do not accept the view of the human person which underlies this terminology, since that view is not compatible with our faith.”

Fonseca argues that it is well within the authority of the Catholic school board and  Cardinal Collins to repeal the code change, and it is essential to do so, given such actions as De Buono.

Catholic boards or bishops “do not have to go to court” to invoke Section 93, he said.

“They simply have to announce to the Ministry of Education that Catholic schools in Toronto will no longer accept curriculum, policies or directives that have been imposed by the Ontario government over the years.”

That would mean TCDSB would not be complying with the “ministry’s code of conduct requirement, or other laws which critics might point to as allegedly preventing the TCDSB from firing teachers who contradict Catholic doctrine,” Fonseca said.

Moreover, Sections 803 to 806 of the Church’s Code of Canon Law state that the diocesan bishop has “the ultimate responsibility to ensure that Catholic schools ‘must be grounded in the principles of Catholic doctrine,’” he told LifeSiteNews.

Section 803.2 states that the “instruction and education in a Catholic school must be grounded in the principles of Catholic doctrine; teachers are to be outstanding in correct doctrine and integrity of life.”

LifeSiteNews contacted both the TCDSB and the archdiocese to ask if there would be any response to De Buono’s ongoing activities, but both said no comment at this time.