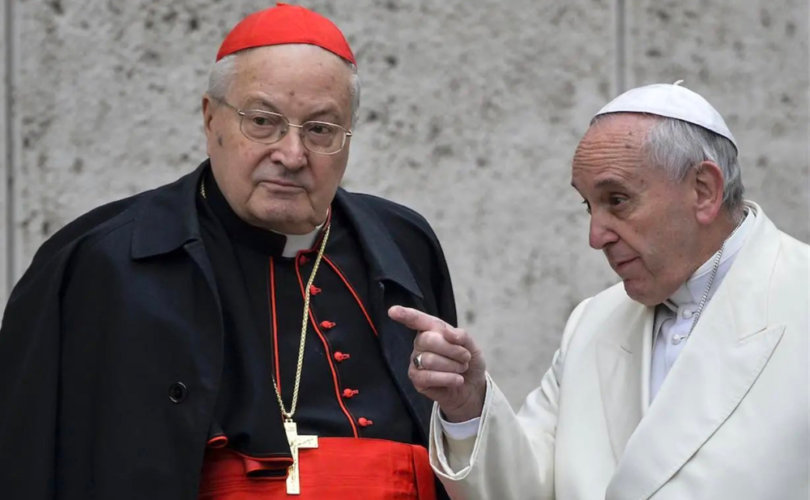 Cardinal Sodano died May 27, after having been hospitalized in Rome’s  Columbus Hospital-Gemelli for COVID-19 since May 9.

Sodano, who has been described as the “Vatican’s Godfather,” was mired in controversy over his alleged role in covering up clerical sexual abuse, particularly in the case of Marcial Maciel and ex-cardinal Theodore McCarrick.

The Holy See was swift to announce Sodano’s death, and Pope Francis sent a telegram to the cardinal’s sister, Maria Sodano, expressing “gratitude” for the late cardinal and his “solitary work in support of three of my predecessors.”

“The death of Cardinal Angelo Sodano arouses in my soul feelings of gratitude to the Lord for the gift of this esteemed man of the Church, who lived his priesthood with generosity,” wrote Francis.

— Article continues below Petition —
STAND with Abp. Cordileone as he bars Nancy Pelosi from Holy Communion until she repents
Show Petition Text
14679 have signed the petition.
Let's get to 15000!
Thank you for signing this petition!
Add your signature:
Show Petition Text

Francis described Sodano as an “ecclesially disciplined man, an amiable pastor,” who carried out his “mission with remarkable dedication” in the Roman Curia.

The office for the Secretary of State for the Holy See stated over Twitter that it was “united in prayer over the loss” of the cardinal.

Sodano’s span at the Vatican lasted 60 years, for he joined the Holy See’s Diplomatic Corps in 1959 and spent time as Nuncio in Chile before ascending to power under John Paul II as Secretary of State.

Despite Pope Francis’ praise for the cardinal, Sodano has been mired in controversy, accused of covering up clerical sexual abuse, and even of being an active homosexual himself.

Cardinal Angelo Sodano, 94, died. From the Chilean sexual abuse crisis, back to the scandals of the surrounding Legionaries of Christ founder, and even abuse allegations in Germany, Sodano’s name has emerged in each case: he either defended the abuser or cushioned their fall. pic.twitter.com/r4H0zW7ams

The highly influential cardinal was very closely linked to the pedophile priest Marcial Maciel, founder of the Legionaries of Christ,  and was said to have protected and covered up for Maciel. As LifeSiteNews has previously reported, Sodano actively blocked efforts in the Vatican to investigate and reveal Maciel’s sexual improprieties.

These allegations were echoed by former Nuncio to the U.S. Archbishop Carlo Maria Viganò in his first testimony in August 2018, saying that “the person chiefly responsible for covering up the misdeeds committed by Maciel was then-Secretary of State Cardinal Angelo Sodano.”

In a subsequent testimony early 2020, Archbishop Viganò noted that Sodano “is certainly no stranger to McCarrick’s promotions…” The archbishop highlighted Sodano’s role in downplaying allegations about ex-cardinal Theodore McCarrick’s sexual abuse, an action seen to be possible due to Pope John Paul II’s declining health and Sodano’s corresponding rise in power.

As noted by Luis Badilla in 2020, Sodano was “the real center of power in the context of the curial nomenklatura: from appointments in general to the curial game of ‘rise and fall’.”

“For years a leaf did not move in the Vatican unless Cardinal Sodano wanted it to,” said Badilla, adding how John Paul II’s pontificate was also the “reign’ of the Angelo Sodano-Stanislaw Dziwisz tandem.”

Following Sodano’s appointment by John Paul II as Secretary of State in 1991, “the power of Cardinal Sodano became total, absolute, incontrovertible, and often more incisive than that of Pope John Paul II.”

Following Sodano’s death, New York Times’ bestselling author Frederic Martel wrote that the cardinal was “La Montgolfiera,” a previously un-identified active homosexual in Martel’s book Sodoma (In the Closet of the Vatican). Himself a homosexual, Martel stated: “My rule was not to reveal the homosexuality of a living priest or cardinal. Now that he is dead, the truth can be written.”

SODOMA | I can reveal now that the person called “La Montgolfiera” in my book #Sodoma was #AngeloSodano. My rule was not to reveal the homosexuality of a living priest or cardinal. Now that he is dead, the truth can be written. #IntheClosetofTheVatican #Sodano @Pontifex pic.twitter.com/6ZlshkrwRz

In another tweet, Martel described Sodano as a “Great diplomatic figure, #2 in the Vatican under John Paul II, far-right nuncio in Chile, friend of Pinochet, active homosexual, defender of countless pedophile priests…He was the hero of my book #Sodoma (La Mongolfiera).” (Emphasis added.)