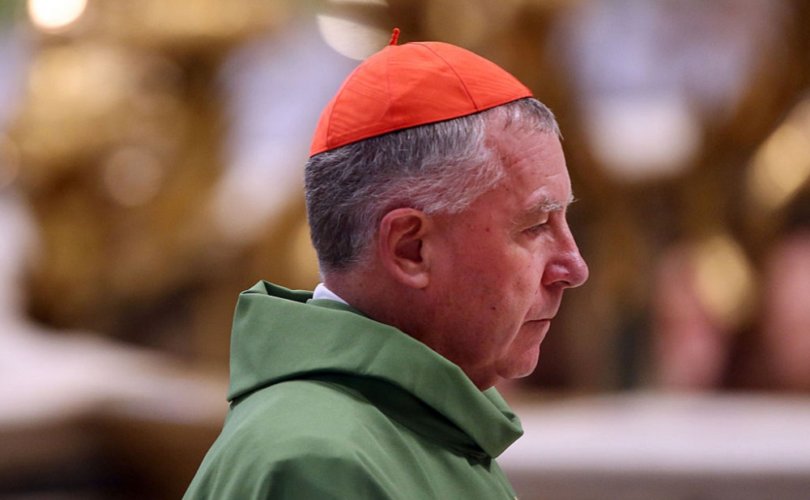 AUCKLAND, New Zealand, August 14, 2020 (LifeSiteNews) — New Zealand’s Cardinal John Dew has suspended public Mass and confession in his Wellington diocese until August 18, even though the government did not mandate church closures in his area in its extreme measures to stamp out an outbreak of COVID-19 that has resulted in 29 new cases.

Prime Minister Jacinda Ardern’s Labor government put Auckland on a Level 3 alert Wednesday, which allows people out only for food and exercise and mandates that churches remain closed except for private weddings and funerals of up to 10 people.

The rest of the country was put on Level 2 alert, which includes restricting public gatherings to a maximum of 100 people.

The government ordered the three-day alerts after four members of one family in south Auckland, a city of 1.5 million, were diagnosed with the virus, breaking the country’s 102-day streak of no new community transmissions.

Ardern announced Friday after a cabinet meeting that the alerts would be extended another 12 days “in keeping with our cautionary approach and New Zealand’s philosophy of going hard and going early,” BBC reported.

She said this amount of time would allow “the cluster [to] be identified” and “isolated, and we can move to Level 2 in Auckland with confidence.”

The six bishops of New Zealand released a pastoral letter August 12 reiterating that Level 2 restrictions for Mass include no holy water in the fonts and that “Communion is only to be distributed in the hand, not on the tongue.”

Dew also released a letter the same day stating he was suspending Mass and confession until August 18 in his diocese, which straddles the country’s north and south islands, and numbers about 83,000 Catholics in a population of 654,000.

“With the return of Alert Level 2 outside of Auckland we need to proceed with the utmost caution in the archdiocese,” wrote Dew, a liberal prelate known for his sympathy for promoting the LGBT agenda in the Church and advocacy of Holy Communion for Catholics separated from their spouses who have taken up with new sex partners.

“Churches have been part of the spread of COD-19 overseas and we don’t want that in New Zealand.”

When on Level 2 alert previously, “it proved very difficult to have Masses with the 100 person limit” while maintaining social distancing, and “there are many issues around who should take part and how it is to be managed,” wrote Dew.

“To be safe I am suspending all Masses, and parish activities which involve gathering, until Tuesday,” he stated.

“Taking Communion to the sick and Reconciliation are also suspended for the same period of time. Priests can make their own decision about those who are very ill or in danger of death,” he added.

“Churches can be open for private visits but there is to be no Eucharistic Adoration. Contact tracing information will need to be collected and social distancing observed.”

Public Masses will continue under Level 2 restrictions in the country’s other four dioceses at this time, according to David McLoughlin, communications adviser for the New Zealand Catholic Bishops’ Conference.

Indeed, a Hamilton diocese Facebook post encouraged Catholics who are well to attend Mass on the Solemnity of the Assumption on Saturday, even though dispensed from the obligation to attend, “and give thanks! Get in touch with your local parish and find out what time mass is near you.”

The Ardern government’s original Level 4 State of Emergency, which was in place from March 25 to May 13, was one of the strictest lockdowns in the world, and its response to COVID-19 has raised concerns over civil liberties.

On Thursday, the government announced that all COVID-19-infected citizens, and possibly close relatives with them, will be placed in mandatory “quarantine facilities.”

The BBC reported that as of Friday, 38 New Zealanders are being held in government quarantine facilities.

Moreover, legislators voted in March to decriminalize abortion instead of putting the matter before a planned referendum.

When moving to Level 2 in May, Ardern’s government passed a law capping religious services at 10 people while allowing a maximum of 100 to gather in other public places, such as restaurants, shopping centers, and movie theaters.

However, it relented two weeks later after the bishops lobbied for faith gatherings of at least 100.

On June 12, the country of 4.8 million moved to the least restrictive Level 1 alert, and Catholics were able to attend Mass with no restrictions on numbers and no social distancing requirements, although the bishops’ dispensation from the obligation to attend Mass on Sunday remained in place.

The bishops noted at a June meeting that “there were differences between some dioceses and even between some churches” in implementing Level 1 for public Masses — for example, “some churches allowed Communion from the Chalice, others did not” — according to a report on the New Zealand Catholic Bishops’ Conference website.

“But they decided that such matters were rightly for local people to decide.”

The bishops reiterated in their August 12 letter that when the country goes back to Level 1, “our advice will continue that Mass may recommence so long as Ministry of Health guidelines are met; any Mass and Communion restrictions are to be determined by the diocese or parish.”

August 17, 2020 correction: Cardinal Dew's August 12 letter suspended Mass and confession until August 18, not August 26, as this article initially stated. According to a spokesman for the New Zealand bishops’ conference, Dew will confirm on August 18 if he will extend the suspension another 12 days, following the government's decision Friday to extend its alerts for that period of time.