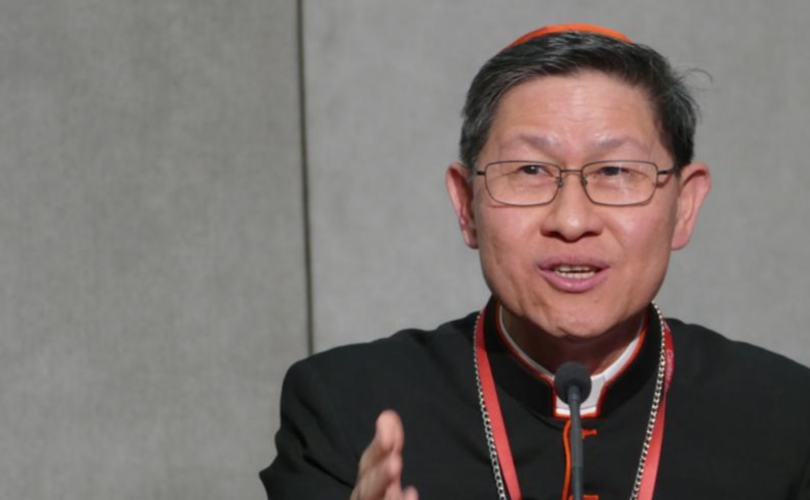 ROME, October 23, 2018 (LifeSiteNews) – Cardinal Luis Tagle of the Philippines, who is widely thought to be papabile, today said he has a “hunch” that “LGBT” issues will be present in the final document of the Vatican Youth Synod, but said he is still unsure what “form” and “approach” it will take.

Cardinal Tagle’s comments come as bishops head into the final stretch of the synod on young people, and amid heightened concerns that it is being used as a vehicle to normalize homosexuality.

At a synod press briefing today, a question was asked to the panel of bishops about the “potential reference” to “LGBT Catholics” in the final document of the synod. Given that “LGBT” was mentioned in the synod’s working document, the Tablet’s Christopher Lamb asked, “if it does not appear in the final document, is there a danger that this is a case of the synod fathers listening but not necessarily hearing or absorbing what they are receiving?”

Synod organizers used the ideological phrase “LGBT youth” in paragraph 197 of the synod’s working document (Instrumentum laboris), and refused to remove it once it emerged, contrary to their original claims, that it was not a quote from the pre-synod document prepared by young people last March.

Cardinal Tagle responded today to the Tablet, saying that in the synod hall and his small group, the “approach of the Church to the community … the so-called ‘LGBT’” was “present, and many times raised.” He said the “call” for the Church to be “a welcoming Church, and a Church that regards the humanity of everyone, was also present, not only as a theme but also … as a spirit, as an atmosphere.”

The cardinal declined to comment further, saying the synod fathers had only received the draft of the final document this morning. But he added: “I should say my hunch is it will be there. In what form, and how it will be approached I don’t know, but I’m confident that it will be part of the document.”

In comments to LifeSite following today’s briefing, a moral theologian in Rome told LifeSite: “The issue in using language of ‘LGBT’ is that language is a symbol of reality.”

In the first days of the synod, Archbishop Charles Chaput of Philadelphia told Pope Francis and members of the Synod of Bishops that “LGBTQ” and other similar language should not be used in any Vatican document.

Concerns are heightened by the fact that a global “LGBT” coalition has actively been seeking “to take advantage” of the Youth Synod to pressure the Church to change her teaching and pastoral approach on homosexuality.

“You have said that the synod has been insistent on the welcome and accompaniment and integration of homosexual young people. So I ask you: In the seminaries throughout the world, we know that the welcome of homosexual young men as candidates to the priesthood is very strong and also very generous, with the effect that Pope Francis has spoken about it in alarming words.”

Last May, Pope Francis spoke behind closed doors to Italian bishops gathered for their plenary assembly, telling them: “The seminaries are welcoming too many homosexuals” and “we need to put the brakes on it.”

The archbishop of Manila said he couldn’t speak for the whole synod but in his own small group, “the humane regard of the Church to people, whatever their sexual orientation may be, was very much discussed.”

Tagle said the issue as seminaries “did not surface” in his small group. But he added that “it was also very clear that, while the constant attitude is that of respect for human dignity and the human person, we also recognize that in different states of life, especially in the Church, there are some demands or some requisites or some requirements that we have to look at, for the proper exercise of a charism or a ministry.”

“We hope that a human and respectful stance towards a person will not be seen as contradictory, for example, to some requirements that a particular job requires,” he said.

During today’s briefing, Bishop Bienvenu Bafouakouahou of the Republic of Congo remarked that “LGBT” issues are foreign to Africa and pertain more to Europe and the West. The subject of ideological colonization has also been raised during the synod, and perhaps what the African bishops have not considered is that, unless they resist the LGBT lobby, it will soon be at their doors seeking to colonize the minds of their young people and be used as a condition for receiving aid.

This morning, the synod fathers received the first draft of the synod’s final document.

On Wednesday, the bishops will discuss and debate the draft, and may offer amendments as individuals or in groups. The synod’s 12-member drafting commission will then amend the draft.

The debate over whether “LGBT” will be included in the final document will, therefore, take place in the coming days.

With 43 Africans participating in the synod, and a potential coalition from the United States, Poland and other Eastern countries, it remains to be seen if Cardinal Tagle’s “hunch” will come to pass.