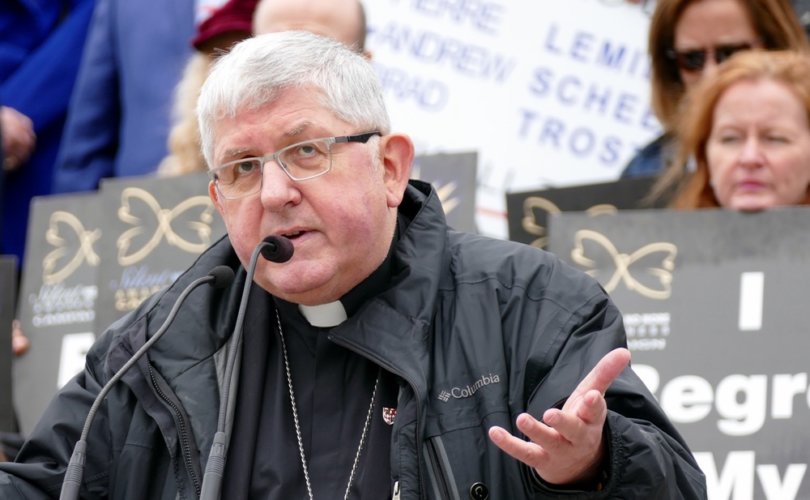 OTTAWA, May 15, 2017 (LifeSiteNews) — Canada’s top Catholic cleric said at the March for Life that prayer and fasting are needed to end abortion and euthanasia.

“It is by the hand of God that the sanctity of human life will treasured once again in our sad land,” Cardinal Thomas Collins of Toronto said in a homily at St. Patrick’s Basilica during Mass on the morning of the March.

“We need prayer and fasting if the evils that afflict our land are to be removed,” he said.

“We offer up the Holy Sacrifice of the Mass for that intention, and we pray for the saints to intercede to bring about the change of hearts that is needed in all of us.”

Added Collins: “We must especially pray for those who are convinced of the rightness of abortion and euthanasia. Only love triumphs, not contentiousness.”

The March for Life is Canada’s biggest annual pro-life demonstration and marks the legalization of abortion on May 14, 1969, under the Liberal Omnibus bill. That law was struck down in 1988, leaving Canada with no law regulating abortion.

Since then, upwards of 3.5 million unborn children have been killed by abortion, with a toll of 100,000 pre-born lives ended every year.

Canada also legalized euthanasia in June 2016, after a Supreme Court 16 month earlier that struck down the ban against it as unconstitutional.

Since then, 1,324 Canadians have been reported as killed by euthanasia or assisted suicide.

“The courts and legislatures of our country have authorized lethal injection as a supposed form of merciful healthcare,” noted Collins, “seeking to disguise the grim reality under the false language of medical assistance in dying.”

The background of “these malign judicial and legislative actions is the fact that many of our fellow citizens, including many Catholics — perhaps most Catholics — have been led to believe that it is quite legitimate, even praiseworthy, to seize control of the gift of life and to kill,” Collins said.

“These are things which bring shame upon our country and a great sadness to our hearts, ” he told the pre-March rally on Parliament Hill. “We do not own life, we are merely entrusted with that gift.”

Collins stressed to those at Mass at the downtown Basilica that they have a mission.

That mission is to “use what talents God has given us to help our fellow citizens to realize that human life is a gift from God, to be cherished from the first moment of conception until natural death.”

It’s also the 100th anniversary of the Virgin Mary’s apparitions to three shepherd children at Fatima, Portugal, where her messages included an urgent entreaty for prayer and sacrifice for the conversion of sinners.

“We learn from Fatima,” Collins said in his homily.

Fatima is a “reminder to us as we struggle against the culture of death that in a dark time of ruinous war, God sent a sign of his provident care for his people, a call to repentance and an assurance of his love for suffering humanity.”

Moreover, at Fatima, “God chose little children to be the recipients of a vision of Our Lady,” observed Collins.

“It was children in their innocence and weakness in a world caught up in the deadly power games of cynicism and brute force … who were the perfect human instruments of God’s will.”

Yet another anniversary marked this year is 500 years since the Protestant Reformation, Collins said.

Martin Luther provides a lesson as well, “in a sort of reverse way.”

Although Luther was “strong on divine providence,” he had “a weaker understanding of the goodness of human nature” and that “divine providence acts in harmony with human capability.”

So for Luther the question was “which is it, faith or works? Well, it’s works, faith acting together.” Similarly, Catholics see God’s providence working together through Scripture and the traditions of the Church.

“This is the Catholic ‘and,’ the harmony of the divine and the human, faith and reason,” the cardinal said.

The mission of divine providence needs both the prophet and the sage, he explained.

The prophet uplifts and encourages believers by proclaiming the truth to them and the sage persuades unbelievers to accept the truth by reaching out to them through reason, wisdom, and natural creative gifts.

“So we need the Catholic ‘and’ to be prophetic sages and wise prophets together. Both are needed.”

And “we keep our prophetic vision fresh through adoration of Our Lord through the Blessed Sacrament,” noted Collins. “It it is God’s will, not ours, that we proclaim with clarity and charity.”

“We must pray in silence too,” he said.

Collins recommended “reading the wonderful meditations of the great Cardinal Robert Sarah on The Power of Silence.”

“Silence should above all be the sign of the March for Life, not vain chanting of slogans, but silent prayer, or praying the rosary,” said Collins.

“Silence speaks louder than noise. Noise is the way of the world, the way of darkness. Silence is the world of God.”

He added: “We’re not just another lobbying group. We’re not a lobbying group at all. We walk in prayer. For it is not our mission but the mission of the Lord in which we are engaged … we must diminish, God must be there.”

Archbishop Terrence Prendergast of Ottawa, papal nuncio to Canada Archbishop Luigi Bonazzi; Bishop Brendan O’Brien of Kingston; Bishop Christian Riesbeck, auxiliary bishop of Ottawa; and Bishop Scott McCaig of the Military Ordinariate were also at the March for Life, as was Bishop Charlie Masters of the Anglican Network in Canada.

Abortion was legalized in Canada 48 years ago. Today, thousands marched for life