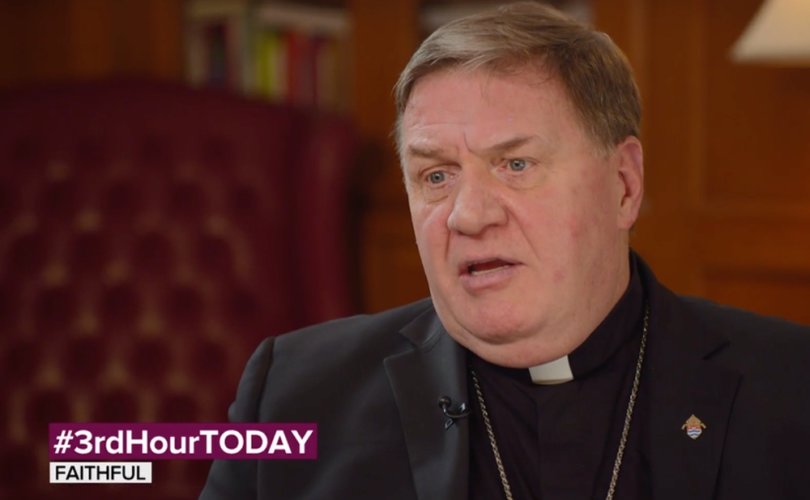 May 17, 2021 (LifeSiteNews) — U.S. Cardinal Joseph Tobin said that Pope Francis’ “long-game” plan to effect change in the Church — to the point of bringing about “the Church’s own conversion” — will be accomplished through the vehicle of “synodality.”

“Synodality is, in fact, the long-game of Pope Francis,” said Tobin, Archbishop of Newark, during a May 4 Zoom lecture for Loyola University Chicago which was hosting its annual lecture in honor of Cardinal Bernardin in connection with the Hank Center for the Catholic Intellectual Heritage.

Tobin said that synodality is one of the “most misunderstood” phrases in the Francis pontificate.

“At this point, synodality is a long-established buzzword of this papacy. Francis keeps calling for a more decentralized church, one marked by collaborative and consultative decision-making, a functionality we generally associate more with the horizontal structures of churches of the East as opposed to the top-down Roman hierarchy in the West,” he said.

The cardinal noted that Pope Francis has called the next synod of bishops to focus on synodality. The October 2022 meeting will focus on the theme “For a synodal Church: communion, participation, and mission.”

“The coming gathering is essential for our shared growth as the body of Christ to be more aware and more intentional in our adoption of what Pope Francis sees clearly, and advocates openly, as a model of the Church that the Lord expects from us in this millennium,” commented Tobin about the upcoming meeting. “A millennium,” he continued, “… even in Church terms that is what we call a long-game. And that is why I would like to spend some time reflecting with you today on how synodality is, in fact, the long-game of Pope Francis, how it challenges us, what it calls us to be, where it is leading us, and how that process will require changes in how we ‘do’ and ‘are’ church.”

The 68-year-old archbishop of Newark was made a cardinal by Pope Francis in 2016. He claimed in 2018 that the “Church is moving on the question of same-sex couples.” He drew criticism that same year for tweeting “Nighty-night, baby. I love you,” and then deleting the tweet, saying that it was a private message meant for his sister.

Tobin sees that the Church has been set on a course since Vatican II to become a synodal Church.

“John XXIII read the signs of turmoil and destruction that had followed humankind out of the first half of the 20th century, saw that the Church had to be as intentional and missionary as it possibly could with its witness. And, the way to achieve it, the way to achieve all this, was through a council. In effect, he called on the council to create a blueprint for the engine that would power the barque of Peter in the third millennium. John cast the vision: This is what we need to build. Vatican II produced a blueprint. Paul VI set to work constructing it. John Paul II made sure it kept to the exact specifications required. Benedict XVI put on the finishing touches on its propulsion engine. And now Francis has flipped the switch to ‘on.’”

The cardinal said that synodality in the Church in previous centuries was misused and that the time has come to use it rightly.

“We cannot deny that for centuries [in] our existence as a Church, synodality was, in fact, used to kick people out … With the early councils, we would come together to repudiate this heresy, to define that dogma, and the body of Christ could lumber through history,” he said.

“But, I would posit that we’ve entered a new stage of the journey, one in which the acts of synodality do not look so much like sweeping dogmatic definitions as they do fine-tuning how the Gospel is applied to the signs of the times,” he continued.

“With that comes the next important point of Francis’ long-game: conversion. When I say conversion, I’m talking about the Church’s own conversion, a new way in understanding and approaching how we carry out our mission. Francis has rightly decried the mindset of ‘but we’ve always done it this way.’ When you’re towing two millennia of baggage after you on the journey, it behooves you to be intentional about which tools you have at the ready and which tools you’ve stocked away in some forgotten luggage compartment,” he added.

Tobin said that a synodal Church is one of “listening” and “dialogue.” It “can’t show up with an imperialist attitude where you claim to have all the answers,” he said.

He criticized those within the Church as “rotten” who attempt to apply the Church’s laws to concrete situations.

“Folks who seem most threatened [by Francis’ plans for the Church] from the beginning have been the ones with the most engineered grasp of all the norms and canons. If A equals ‘irregular union,’ and B equals ‘not living as brother and sister,’ then A plus B equals ‘never can be admitted to the Eucharist.’ To this I would posit that you can be the most knowledgeable mechanic on earth and still be a rotten driver.”

Tobin quoted from the Pope’s 2016 encyclical Amoris Laetitia to shed light on the meaning of synodality. Francis wrote, “Not all discussions of doctrinal, moral, or pastoral issues need to be settled by interventions of the magisterium.” Tobin commented that “what Francis was saying was that the Vatican is not the only part of the body of Christ,” implying that bishops’ groups have a role in settling such matters.

Many high-profile Church leaders, however, have criticized a concept of synodality that is being used in some countries, such as in Germany, where the bishops’ “Synodal Path” is being used to undermine perennial Church teaching on the male priesthood, marriage, and sexuality.

— Article continues below Petition —
PRAYER PLEDGE: Join faithful Germans in prayer to STOP homosexual "blessings" and plunge into schism
Show Petition Text
11019 have signed the petition.
Let's get to 12500!
Thank you for signing this petition!
Add your signature:
Show Petition Text

Cardinal Raymond Burke criticized the concept of “synodality” in a 2018 interview. “It’s become like a slogan, meant to suggest some kind of new church which is democratic and in which the authority of the Roman Pontiff is relativized and diminished — if not destroyed,” he said. Burke said the traditional meaning of the term synod used to be “to find ways to teach the Catholic faith more effectively and to promote the proper discipline in the Church. That’s basically what a synod of bishops is — that’s its definition.”

Cardinal Robert Sarah, while he was prefect of the Congregation for Divine Worship and the Discipline of the Sacraments, was also critical of how synodality was being interpreted. “People are trying to detach the local churches from Rome. People want to be autonomous with regard to Rome and the vicar of Jesus Christ, that is, Peter, he who gives direction to the church of Rome,” he said in a 2019 interview. Sarah said that “without Peter, everything in the Catholic Church would be destroyed, reduced to fragments and become nothing. Jesus never created bishops’ conferences or local churches. It is on Peter that He built His Church. Destroying the unity of His church amounts to rejecting Jesus. People want to tear up and destroy the unity of the Church.”

Bishop Athanasius Schneider has also raised concerns about the concept of synodality, saying in a 2018 interview that the term is being used by some to “promote their own agenda” within the Church with the intention to “transform the life of the Church into a worldly and Protestant parliament style with continuous discussions and voting processes on matters that cannot be put to a vote.”