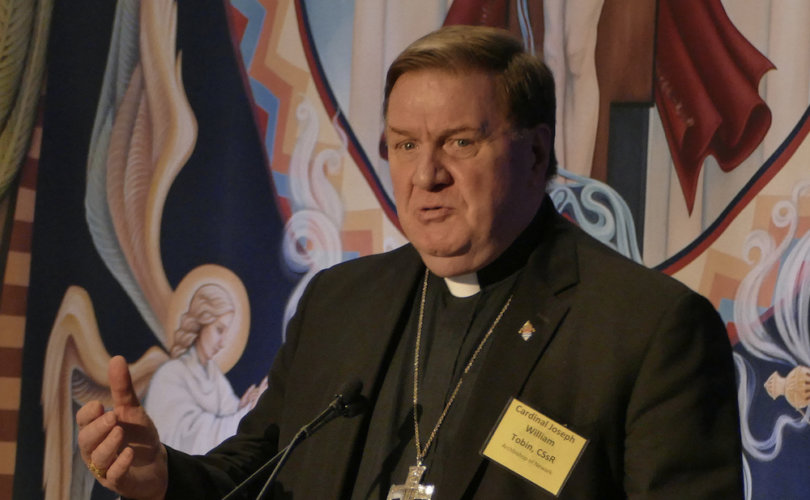 September 21, 2018 (LifeSiteNews) – Cardinal Joseph Tobin, who oversees sex abuser Cardinal Theodore McCarrick’s former archdiocese of Newark, has withdrawn from participation from the upcoming “Youth Synod” to be held in October in Rome by Pope Francis, according to an open letter published on the archdiocesan website today.

Tobin writes that he asked Pope Francis to “release” him from the obligation of attending the synod, so that he could “use the month of October to attend to all dimensions of the crisis we face,” an apparent reference to scandals involving the sex abuse of minors and seminarians by Cardinal McCarrick.

Tobin called the upcoming synod “a uniquely important moment in the life of the Church,” adding that he was “honored to have been named by the Holy Father as a member of this special gathering whose topic . . . is of vital concern to the Church today and in the future.”

“However, as you are aware, the Archdiocese of Newark suffers greatly as a result of the crisis that continues to unfold. After the revelations of the past summer, I could not see myself absent for a month from our archdiocese and from you, the people entrusted to my care,” continued the archbishop. “After prayer and consultation, I wrote to Pope Francis, asking that he dispense me from attending, but assuring him that I strongly support the objectives of the Synod and that I would obey whatever he decided.”

“The Holy Father responded the next day with a beautiful pastoral and compassionate message. He told me that he understands why I need to stay close to home, and he released me from the obligation to attend the Synod next month,” Tobin added.

The Youth Synod has been criticized for focusing on issues regarding young people while Pope Francis remains silent on his apparent complicity in coverups of the exploding sex abuse crisis in the Church. Pope Francis has filled the synod’s participant list with Church officials who share his agenda of modifying Catholic teaching on sexual morality and the sacrament of marriage, and of accommodating Church doctrine to modern fashion. Many of them have been suspected of sex abuse coverups and of cooperation with the “gay mafia” among Catholic clergy.

Tobin has been an object of suspicion regarding his own knowledge of homosexual predation in the archdiocese. He was recently named by Archbishop Carlo Maria Viganò, a former apostolic nuncio to the U.S., as a prelate recommended for promotion to Pope Francis by Cardinal McCarrick, who is seen as a leader of the same “gay mafia.”

“The appointments of Blase Cupich to Chicago and Joseph W. Tobin to Newark were orchestrated by McCarrick, Maradiaga and Wuerl, united by a wicked pact of abuses by the first, and at least of coverup of abuses by the other two. Their names were not among those presented by the Nunciature for Chicago and Newark,” wrote Viganò in his public testimony.

Tobin’s own personal life became the subject of controversy earlier this year when he mysteriously tweeted “Supposed to be airborne in 10 minutes. Nighty-night, baby. I love you,” on the evening of February 21 of this year. He deleted the message the next morning after it had been circulated widely on the internet, claiming that it was meant to be a private message to his sister.

He has previously claimed that he has “never heard of a gay sub-culture” in the archdiocese, despite McCarrick’s long record of sexually exploiting seminarians and reports of continuing misbehavior by abusers.