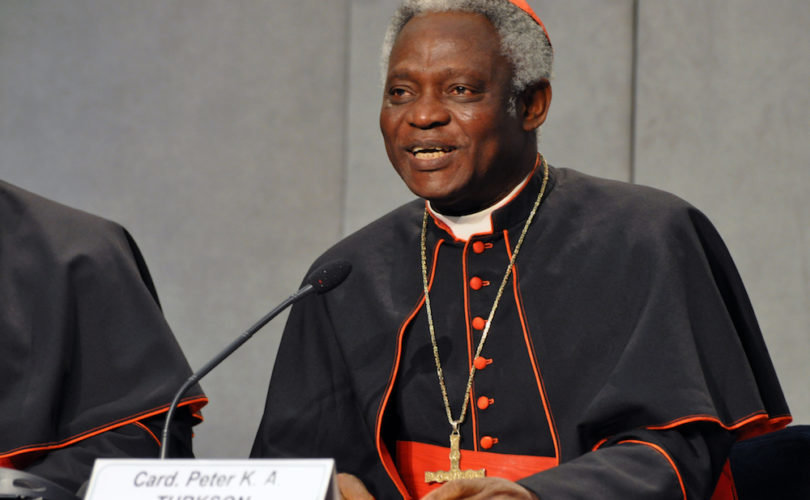 The announcement comes only two weeks after the pope announced the formation of another major new department, the Dicastery for the Laity, the Family and Life, with American Bishop Kevin Farrell as its head.

“In all her being and actions, the Church is called to promote the integral development of the human person in the light of the Gospel,” Pope Francis wrote in a moto proprio, or legal decree issued at his own initiative, instituting the Dicastery for Promoting Integral Human Development. “This development takes place by attending to the inestimable goods of justice, peace, and the care of creation.”

This Dicastery will deal with issues “regarding migrants, those in need, the sick, the excluded and marginalized, the imprisoned and the unemployed, as well as victims of armed conflict, natural disasters, and all forms of slavery and torture,” the pontiff wrote.

Turkson currently heads the Pontifical Council for Justice and Peace. It will be folded into the new dicastery on January 1, 2017.

In 2015, Turkson raised eyebrows when he suggested to the BBC that “birth control” could be used as a solution to perceived overpopulation and said Pope Francis had previously called for “a certain amount of control of birth.”

He later walked back his statements, saying he regretted using the term “birth control” when what he meant was spacing of births or “responsible parenthood.”

Farrell has a mixed record on life and family issues. He has been vocal about the need for Catholics to fight abortion. Farrell is a prominent participant in the annual Dallas March for Life and has spoken at its accompanying pro-life rallies.

Under Farrell’s oversight in 2011, the University of Dallas introduced a pastoral ministry degree that some labeled “doctrinally challenged” and a threat to the University’s Catholic identity. Catholics like Dr. Patrick Fagan, a prominent social scientist, expressed concern that this was steering the University of Dallas in an unorthodox direction. Fagan wrote that he was particularly concerned that some of the School of Ministry faculty members appeared to question Church teaching on the all-male priesthood and homosexuality.

In 2009, Farrell used progressive Catholic buzzwords when he cautioned in a commencement address against “dogmatism, closed mindedness, judgmentalism, [and] suspicion of another’s motives.”

Such language is often used against orthodox Catholics who defend the Church’s moral teachings.

In 2008, Farrell appointed as pastor of a newly renovated parish a priest whose involvement with a prominent, pornographic online network for homosexual priests and religious had previously been revealed.

The website at the heart of this controversy was called St. Sebastian’s Angels, and the Diocese of Dallas priest who had been a part of it was Father Arthur Mallinson. In addition to accessing its pornographic images, clergy used St. Sebastian’s Angels to trash Church teaching, Pope St. John Paul II, and then-Cardinal Joseph Ratzinger.

The now-inoperative watchdog organization Roman Catholic Faithful, which initially exposed St. Sebastian’s Angels and the various clergy involved with it in 1999, said it alerted all bishops whose diocesan priests were involved with the site. It then went public with the scandalous information.

In May 2008, the Diocese of Dallas acknowledged to LifeSiteNews that St. Sebastian’s Angels contained crude images and words and that Mallinson had been involved with it. Annette Gonzales-Taylor, a diocesan spokesperson, told LifeSiteNews that Mallinson was not supportive of the site’s immoral content. She also said Mallinson had ceased his involvement with St. Sebastian’s Angels in 2001 because of its sinful content.

Mallinson resigned on May 13, 2008, after LifeSiteNews and other media outlets reported on the scandal of his promotion to pastor, which prompted outraged laity to contact Farrell to complain.