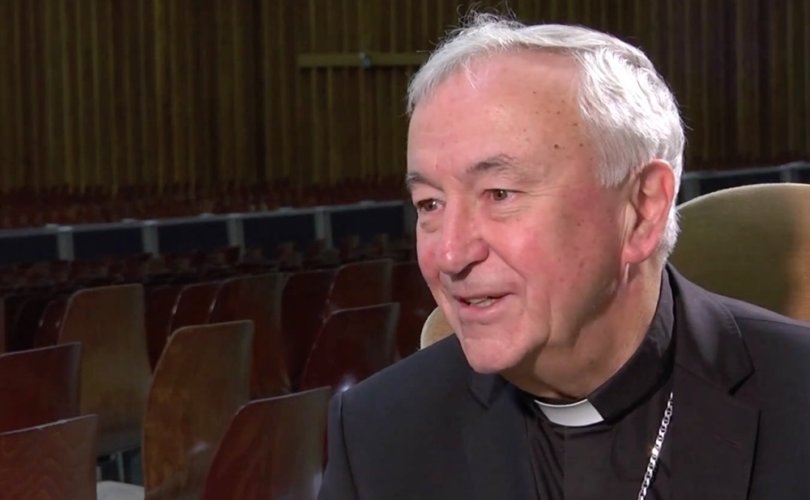 LONDON, U.K., November 22, 2017 (LifeSiteNews) — A U.K. Cardinal appointed by Pope Francis has given his blessing for a pro-homosexual organization to once again work in his archdiocese after his predecessor banned it because of its overt promotion of homosexual behavior contrary to Catholic teaching.

In a communication a little over a week ago to priests in the Archdiocese of Westminster, Cardinal Vincent Nichols recommended that they make use of the organization Quest to minister to “those who live with a same-sex attraction and are often very anxious about their journey to God and their relationship with the Church.” The letter was leaked to LifeSiteNews.

“Quest, which was founded in 1973, is a national organisation providing support for LGBT Catholics, their friends and families,” Nichols, the Archbishop of Westminster, stated in his letter. The Cardinal is the President of the Catholic Bishops' Conference of England and Wales.

Quest states on its website that it desires to see the “acceptance of homosexual relationships by the Catholic Church.” The organization states that its purpose is to help homosexuals reconcile their Catholic faith with the “full expression of their homosexual natures.”

Quest released a policy statement in 2012 in support of same-sex “marriage,” arguing that homosexual “love and fidelity…has its ultimate grounding in God.” The organization stated in the same policy that “significant advances in social sciences, psychology and of the natural world in recent decades have led us to see same-sex attraction as a perfectly natural, minority variant in the world of human sexual preference.”

The organization was banned from the official Roman Catholic Directory for England and Wales in 1999 by Cardinal Basil Hume, then-Archbishop of Westminster, because of the organization’s public dissent from Church teaching that called homosexual acts “intrinsically disordered.” The organization had been listed in the directory as an approved Catholic organization since 1992.

In a letter explaining his decision to remove Quest from the directory, Cardinal Hume wrote at that time that if an organization is listed, the “assumption must be that it accepts the church’s teaching set out in a manner that is in no way ambiguous.”

“It is one thing for the Church officially to recognize a support group for Catholic homosexual men and women, struggling, as we all do, to live up to the demands of our shared Christian vocation,” he said, adding that it was clear that an explicit part of Quest’s agenda was “to encourage and recognize loving same-sex partnerships,” something which, he said, the Church cannot accept.

Deacon Nick Donnelly, well-known English blogger and journalist, told LifeSiteNews that nothing has changed with Quest's opposition to Church teaching in the nearly 20 years it has been banned from the Archdiocese.

Lepanto Institute President Michael Hichborn told LifeSiteNews that instead of promoting groups like Quest, Cardinal Nichols “has an obligation to the souls under his care to reverse his recommendation and, in fact, warn of the moral danger these groups pose.”

Cardinal Nichols in his letter to priests also recommended they make use of the local pro-homosexual organization “LGBT Catholic Westminster.”

The Cardinal also recommended the organization Courage, a group that faithfully follows Catholic teaching that same-sex attracted persons, along with everyone else, are called to chastity.

LifeSiteNews reached out to Cardinal Nichols, asking why he is promoting pro-homosexual groups in his Archdiocese that hold views contrary to Catholic teaching on marriage and sexuality. No response was given.

Cardinal Nichols has a long history of problematic actions relating to Catholic teaching on marriage and sexuality.

In 2011, Nichols praised civil partnerships for those in same-sex relationships, saying that such partnerships “actually provide a structure in which people of the same sex who want a lifelong relationship [and] a lifelong partnership can find their place and protection and legal provision.”

He has celebrated Masses for LGBT Catholics Westminster and given the group his support, despite its open rejection of Church teaching.

In the wake of the 2015 Synod on the Family, Nichols expressed his disappointment that the synod text did not go “far enough” to “respect, welcome and value” people in same-sex relationships.

The Catholic Church, following the Bible, teaches that God created humans as “male and female” and gave them to each other in marriage so they could “increase and multiply.” The Church furthermore teaches that sexual attraction between male and female as well as the sexual act between a married man and woman have been created by God for the purpose of procreation.

The Catholic Church remains true to God’s original creative plan when she condemns homosexual acts as “acts of grave depravity” that are “intrinsically disordered” since they are “contrary to the natural law” in that they “close the sexual act to the gift of life.”

Following a dictum attributed to St. Augustine, faithful followers of Christ make a distinction between the sinner and the sin, saying that they “love the sinner, but hate the sin.”