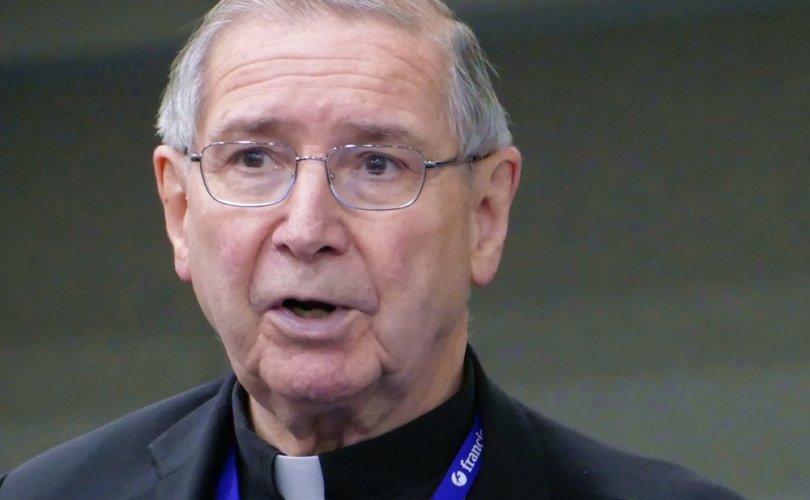 LOS ANGELES, California, March 25, 2019 (LifeSiteNews) – With Cardinal Roger Mahony’s problematic history of cover-up with sex abuse cases during his time as head of the Archdiocese of Los Angeles, it’s expected that Catholics would be scandalized by his appearance over the weekend at the archdiocese’s massive annual Religious Education Congress (LA REC).

“The cardinal has become a symbol of the mishandling of sex abuse complaints,” Morse said in a statement to LifeSiteNews. “For him to address a Catholic education conference at this time is wildly inappropriate.”

Mahony’s mishandling of abuse cases became public record upon the 2013 court-ordered release of archdiocesan files in the wake of a 2007 sex abuse lawsuit settlement, for which the LA Archdiocese had to fund the largest payout for sex abuse claims in Church history ($660 million).

Following the documents’ release, Mahony was admonished by his successor, Los Angeles’ current Archbishop Jose Gomez, and pulled from having “any administrative or public duties” in the Archdiocese of Los Angeles.

Nonetheless, Mahony, who has flouted the restriction, and is a known campaigner on immigration, gave a workshop at the LA REC on Saturday on the issue. The Los Angeles archdiocese’s event takes place each year in nearby Anaheim in the Diocese of Orange.

LifeSiteNews delivered two petitions to the Archdiocese of Los Angeles on Friday in opposition to Mahony’s appearance – LifeSite’s petition of more than 5,800 names, and another petition with more than 4,300 signatures gathered by the Ruth Institute.

While Mahony has reportedly apologized for his handling of sex abuse cases, met with victims, and established a victims assistance office – the wounds of the sex abuse crisis remain fresh and he still embodies for many the hierarchy’s mishandling of abuse cases. It’s this, but also other aspects of the controversial cardinal’s history that have some Catholics dismayed at Catholics at Mahony’s appearing at the REC, as though nothing were wrong.

“I am still disappointed that Mahony is still speaking,” one local Catholic told LifeSiteNews on the first day of the three-day adult section of the gathering.

Catholics are supposed to be supportive and forgiving, a local Catholic man told LifeSiteNews, but the situation with Mahony is different, because of the harm done to sex abuse victims.

“He could be doing some other kind of penance, not out in public,” the man said regarding Mahony. “It implies that what he did is okay.”

Both Catholics requested anonymity in their comments.

In at least one other REC workshop that was focused on the Church’s handling of the sex abuse scandal, one Catholic called out during the question and answer period, remarking how Mahony had still been performing Confirmations in the archdiocese despite being suppressed from public ministry.

The local Catholic continued to cite other issues with Mahony for LifeSiteNews.

This included barring the Church’s only sanctioned ministry for same-sex attracted Catholics Courage, and its companion Encourage program for family members, she said. The woman, who has a child who struggles with same-sex attraction, said this act directly impacted her family negatively since it left them with only LGBT-affirming groups to choose from.

“Not only did he cover up the sex abuse in LA,” the Catholic said, “not only did he propose and push horrible liturgical changes in our parishes in Los Angeles .…”

She then referenced Mahony’s 1997 document on the liturgy, in which he calls for an Americanized liturgy that ignores the meaning of the Mass as a sacrifice. His writings prompted criticism from EWTN foundress Mother Angelica, to which Mahony responded by angrily seeking her censure with various Vatican offices unless she would publicly apologize, even broaching threats of denying Mother the sacraments.

No Courage, but other LGBT-affirming programs are okay

The local Catholic woman’s list on Mahony went on.

“Not only did he forbid Courage and Encourage from being in LA,” she said. “But instead he brought in so many gay-affirming anti-Catholic ministries to LA.”

It was only after Mahony’s time that the Courage apostolates would receive a blessing and be allowed to minister within the archdiocese.

The local Catholic man is also the parent of a child who struggles with same-sex attraction, and he too recalled for LifeSiteNews that Mahony wasn’t supportive of Courage and Encourage.

“Overall he was not supportive of traditional teaching,” he said.

The Courage apostolates work to uphold the Church’s teaching on sexuality, which is that all Catholics – gay or straight, married, single, celibate and ordained – are called to live chastely. Courage’s programming stands largely alone in upholding this teaching in the area of homosexuality. Many “support” groups for Catholics who struggle with same-sex attraction espouse acting upon their attractions under the guise of being welcoming, accepting, and accompanying. This has meant some quarters in the Church have actually acted to suppress Courage, while “accompanying” same-sex attracted Catholics into acting on their inclinations is pushed at venues such as the LA REC.

Mahony is lauded on the archdiocese’s Catholic Ministry with Lesbian and Gay Persons (CMLGP) webpage.

While Courage and Encourage have since gained Los Angeles Archbishop Jose Gomez’ blessing to be available to Catholics, the Mahony legacy persists, and other LGBT-affirmative groups still have precedence.

“I think it’s easier to find all the other groups,” the Catholic gentleman said, “all the more liberal groups.” “I think in that sense it hadn’t been promoted as it could be,” he added.

The Catholic father further told LifeSiteNews that under Mahony, Mass in the archdiocese started to take different turns, becoming more Protestant, with guitars and clapping, and the Religious Education Congress kept getting more liberal.

This was evidenced by the closing Mass for this year’s REC, which, when it surfaced on YouTube Sunday, garnered remarks on social media from Catholics for its bizarre liturgical character.

“It definitely transformed into something that’s not very Catholic, or orthodox,” the local Catholic man told LifeSiteNews of the REC.

Mahony’s appearance at the REC was also not good given the larger picture in the Church right now related to the clergy sex abuse crisis, he said.

“The Church is often accused of forgetting the victims,” the Catholic man said.

“That’s evidence right there that we aren’t being sensitive,” he said of Mahony being given a platform to speak at the REC. “At best we’re being insensitive, at worst, we’re condoning what he did.”

Mahony had caused controversy as well last November at the U.S. Bishops’ fall meeting in Baltimore, which was mainly focused on the abuse scandal, when he took the floor during an open mic session of the meeting and talked for more than five minutes about how he thought the bishops should lead during the abuse crisis.

Mahony was one who refused to deny Communion to pro-abortion politicians or homosexual activists who purposely presented themselves for Communion wearing rainbow sashes to protest Church teaching on sexuality. He was among four U.S. bishops to officially welcome them to Communion wearing the sashes.

He is reported, though, to have denied Holy Communion to a young Catholic woman because she approached to receive it on the tongue.

He also had a group of young pro-life Catholics removed and threatened with arrest at the Los Angeles Cathedral in 2005 during prayerful protest of the inauguration ceremonies being held inside for Antonio Villaraigosa, mayor-elect of Los Angeles, who is pro-abortion while identifying as Catholic.

In the investigation leading to the archdiocese’s abuse settlement, the cardinal was found to have had concealed his knowledge of abusive priests and shielded them from prosecution. He’d also moved some abusers after they’d had counseling, at times out of state to avoid reporting laws, where they were able to abuse again.

He had withdrawn from a scheduled fundraising appearance for Utah’s Catholic diocese in August in anticipation of possible protests over his involvement in covering up clerical sexual abuse.

Mahony had also pulled out from an appearance earlier last year as Pope Francis’ special envoy to the Catholic Diocese of Scranton’s 150th anniversary Mass. Francis had appointed Mahony as his representative at the celebration observed with a Pontifical Mass on March 4 in the Cathedral of Saint Peter in Scranton, and local Catholics had promised to protest the event due to Mahony’s presence.

To respectfully communicate concerns on Mahony’s appearance at the L.A. REC, contact: