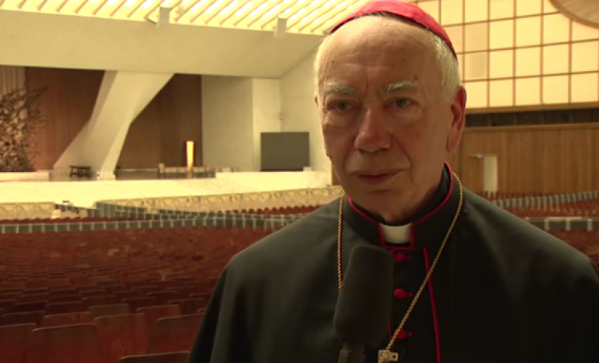 Coccopalmerio asserted in 2014 that the Church should emphasize what he calls the “positive elements” of homosexual relationships.

The Congress of Leaders of World and Traditional Religions is a meeting that promotes interreligious dialogue between “representatives of world and traditional religions, heads of states, heads of international organizations united by a common aspiration for peace, harmony and constructive cooperation for the sake of prosperity of all mankind,” according to its website. The Congress’s October 11 declaration emphasizes “the special importance of adhering to the spiritual guidelines for cooperation to overcome intolerance, discrimination, exclusion, tensions and conflicts based on ethnic, religious, linguistic and cultural differences.”

The same statement affirms the Congress’s support of “all efforts aimed at protecting refugees, their rights and dignity, as well as providing them with necessary assistance,” along with other objectives like stopping terrorism, encouraging “peace-building,” preventing violence in places of worship, and urging “politicians and world media to renounce associating terrorism with any religion.”

“This is a very important moment for human history,” Coccopalmerio told the Congress, according to Kazakh news site B News. “The moment when we focus on the words of wisdom that are key to many important challenges the world faces. The resumption of normal life and peace should be especially considered. Our contribution, religious leaders with politicians, is a guarantee to achieve those important results.”

The cardinal called the Congress “a good platform for meetings, discussing ideas, views on what can be done to strengthen safety in the world.” He spoke about the “necessity” of separating politics and religion.

They “need to keep a distance between each other,” Coccopalmerio said.

“Religion and politics strive to provide people and societies’ well-being, as well as to avoid ambiguity. Religion and politics need to keep a distance between each other. And, such separation gives an opportunity for effective cooperation between these two in the name of common development,” he said.

The prelate then praised Kazakhstan, whose president began the Congress as an initiative in 2003, for its “glorious mosaic of diverse views of religions, which is the basis to avoid conflicts when various groups of religious and ethnic people with different principles live in peace and cooperation.”

In his 1925 encyclical Quas Primas, Pope Pius XI wrote that nations should recognize Christ as King and not embrace false religions, an often-overlooked or misunderstood Catholic principle:

If We ordain that the whole Catholic world shall revere Christ as King, We shall minister to the need of the present day, and at the same time provide an excellent remedy for the plague which now infects society. We refer to the plague of anti-clericalism, its errors and impious activities. This evil spirit, as you are well aware, Venerable Brethren, has not come into being in one day; it has long lurked beneath the surface. The empire of Christ over all nations was rejected. The right which the Church has from Christ himself, to teach mankind, to make laws, to govern peoples in all that pertains to their eternal salvation, that right was denied. Then gradually the religion of Christ came to be likened to false religions and to be placed ignominiously on the same level with them. It was then put under the power of the state and tolerated more or less at the whim of princes and rulers. Some men went even further, and wished to set up in the place of God's religion a natural religion consisting in some instinctive affection of the heart. There were even some nations who thought they could dispense with God, and that their religion should consist in impiety and the neglect of God. The rebellion of individuals and states against the authority of Christ has produced deplorable consequences.

The predominant religion in Kazakhstan is Islam; around 70 percent of its population is Muslim. The Catholic bishops of that country, however, are known for their strong fidelity to Church teaching. The auxiliary bishop of Astana is Bishop Athanasius Schneider, one of the prelates at the forefront of defending Catholic orthodoxy amidst the ambiguity and error many of his brother bishops in other parts of the world promote. Schneider is outspoken about the crisis in the Church under Pope Francis and the need for reverent liturgies and a strong pro-family culture.

On December 31, 2017, Kazakhstan’s three bishops issued a Profession of the Immutable Truths about Sacramental Marriage upholding the Church’s perennial teaching on the Sacraments, marriage, sin, and the reception of Holy Communion. After its release in January 2018, seven more bishops signed it.

Source: Vatican cardinal was at drug-fueled homosexual party, and Pope knows it

Clergy who promote LGBT are committing a ‘kind of apostasy’: Bishop Schneider