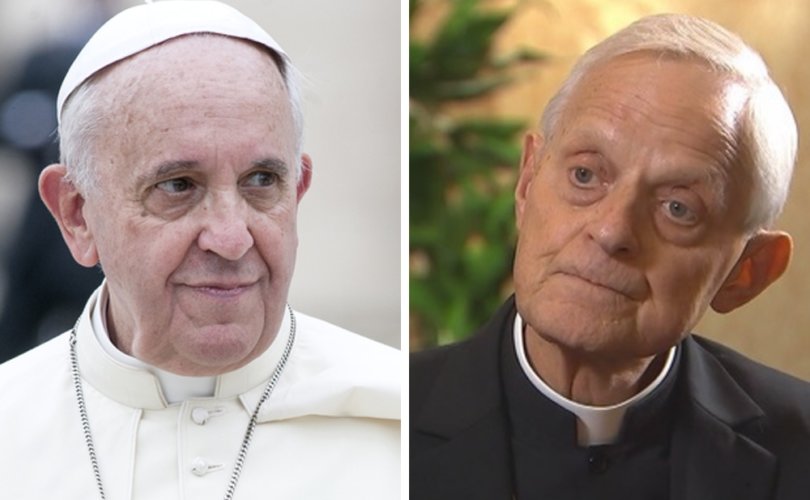 ROME, September 17, 2018 (LifeSiteNews) — Cardinal Donald Wuerl arrived in Rome today, just one week after telling priests of the archdiocese of Washington that he intended “in the very near future, to go to Rome to meet with our Holy Father about the resignation I presented nearly three years ago, on November 12, 2015.”

Last week, in a letter dated Sept. 11, Cardinal Wuerl, 78, told priests of the Washington archdiocese that: “It was clear that some decision, sooner rather than later, on my part is an essential aspect” of moving forward.

“At issue is how to begin effectively to bring a new level of healing to survivors who have personally suffered so much and to the faithful entrusted to our care who have also been wounded by the shame of these terrible actions and have questions about their bishop’s ability to provide the necessary leadership,” he wrote.

The Cardinal’s letter was issued three days before a Sept. 14 Mass at St. Matthew’s Cathedral in Washington to initiate a “Season of Healing” in the archdiocese. Wuerl’s letter was made public so that the Mass would not “be overshadowed by questions about his status,” an archdiocesan online news agency reported.

At the Sept. 14 Mass in the US capital, Wuerl, who has been accused of not doing enough to deal with predator priests while serving as bishop of Pittsburgh, Pennsylvania, prostrated himself as a sign of repentance.

In recent weeks, the cardinal has faced a barrage of allegations that he mishandled and covered up instances of criminal sexual abuse by priests while he was bishop of Pittsburgh, from 1988-2006. In a sweeping grand jury report on criminal sexual abuse released on August 14, Wuerl was mentioned 200 times.

In the aftermath of the release of the report, Pennsylvania Attorney General Josh Shapiro accused Wuerl of lying about his involvement, saying Wuerl’s assertions that he “acted with diligence” were “misleading statements” furthering the cover-up. Some, however, contest that many of the allegations in the report have not been substantiated, and point out that the Catholic Church in recent years has done more than any other institution to rid itself of abuse and help victims.

Cardinal Wuerl’s credibility first came under fire when he declared that he knew nothing of the abuse settlements paid to sex abuse victims of his predecessor, disgraced former Cardinal Theodore McCarrick. His denial of any knowledge of the allegations against McCarrick has been contested even by other bishops as not credible.

Then, on August 25, the Vatican’s former ambassador to the United States, Archbishop Carlo Maria Viganò, released an explosive testimony which detailed Cardinal Wuerl’s complicity in the McCarrick cover up.

The cardinal’s “recent statements that he knew nothing about it … are absolutely laughable. The Cardinal lies shamelessly,” Archbishop Viganò said in his testimony, which he dated August 22 for the feast of the Queenship of Mary.

Viganò, who has been in hiding since the release of his testimony, also alleged that Pope Francis covered up for McCarrick and made him a close advisor, despite having detailed knowledge of his abuse of seminarians and priests.