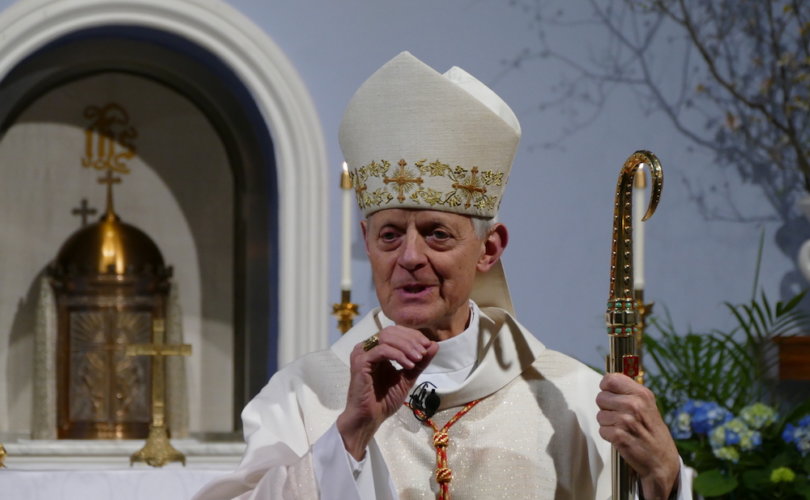 WASHINGTON, D.C., May 6, 2016 (LifeSiteNews) – In response to criticism, the Archdiocese of Washington has confirmed that Cardinal Donald Wuerl will offer and preach at the University of Notre Dame’s Baccalaureate Mass on May 14 but won’t attend commencement the following day, when the university will honor pro-abortion Vice President Joe Biden with its highest award.

The university’s decision to give Biden its Laetare Medal, which is presented “in recognition of outstanding service to the Church and society,” has drawn criticism from many Catholics.  Notre Dame will also present the award to former House Speaker John Boehner.

Catholic World News editor Phil Lawler called on Wuerl this week to withdraw from the commencement exercises so as to “ensure that he does not become part of an event that pays homage to a ‘pro-choice’ Catholic politician.”

Lawler quoted Wuerl’s recent remarks during a homily at a pro-life Mass in response to the Planned Parenthood president Cecile Richards’ speech at Georgetown University. Wuerl had said: “The word ‘choice’ is a smokescreen behind which those killing unborn children take refuge. Every chance you get, blow that smoke away!”

“Even at this late date, [the cardinal’s] withdrawal would send a powerful message of support for the right to life: an unmistakable rebuke to politicians who hide behind the smokescreen that the cardinal himself identified,” Lawler wrote.

When LifeSiteNews asked the Archdiocese of Washington for a response to Lawler’s concerns, they sent the following statement:

Cardinal Wuerl is honored to be the celebrant and homilist at the University of Notre Dame’s Baccalaureate Mass on Saturday, May 14, where he will also receive an honorary degree. Cardinal Wuerl will not attend the commencement ceremony on Sunday, May 15. The archdiocese does not comment on matters involving other dioceses, but refers to the statement on the matter released by the Bishop of Fort [Wayne]-South Bend.

Bishop Kevin C. Rhoades of the Diocese of Fort Wayne-South Bend wrote that Notre Dame’s decision to honor Biden could “provoke scandal” by giving the impression “that one can be ‘a good Catholic’ while also supporting or advocating for positions that contradict our fundamental moral and social principles and teachings.”

“True, he will not literally be on the stage with Biden and Boehner; but he will be in the same news stories.  Cardinal Wuerl will be making a statement, however silently.”

In comments today to LifeSiteNews, Lawler called the Archdiocese of Washington’s statement “disingenuous.”

“If you check the announcement from Notre Dame about the commencement exercises, you'll see that university officials do their utmost to draw attention to Cardinal Wuerl's participation,” Lawler said.  “True, he will not literally be on the stage with Biden and Boehner; but he will be in the same news stories.  Cardinal Wuerl will be making a statement, however silently.”

Holy Cross Father John Jenkins, the President of Notre Dame, has defended the university’s decision to honor Biden, whose support of abortion, same-sex “marriage,” the Obama administration’s contraceptive mandate, and embryonic stem cell research is in direct conflict with his Catholic faith.  Jenkins accused critics of the university’s decision of “intransigence” and fretted, “One of our great challenges today is that people who disagree often will vilify, will attack, will demean the opposition, and then they can’t work with the opposition.”

Biden’s “public service has not been ‘to the Church,’ but largely against the Church,” Notre Dame students wrote in March in a letter in the school’s newspaper criticizing the university for its decision to honor Biden.

Notre Dame Faculty for Life, a group of nearly 100 pro-life faculty members at the university, unanimously approved a resolution condemning Notre Dame’s decision to give Biden the Laetare Medal.

“In past years Notre Dame awarded the Laetare Medal to persons who spoke truth to power.  This year, Notre Dame has chosen to honor power at the expense of truth,” they wrote.