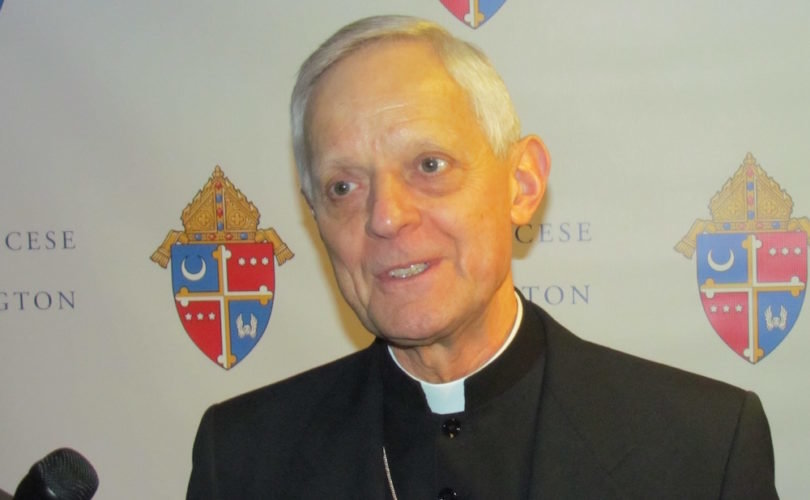 Significantly, Wuerl and his team seem to have abandoned his strategy of repeated denials and retreated into absolute silence, at least for now.

“I myself brought up the subject with Cardinal Wuerl on several occasions,” wrote Archbishop Viganò, “and I certainly didn’t need to go into detail because it was immediately clear to me that he was fully aware of it.”

The Cardinal’s “recent statements that he knew nothing about it,” said Viganò, “are absolutely laughable. He lies shamelessly.”

Viganò’s accusation follows on the heels of a similar accusation by Pennsylvania’s Attorney General Josh Shapiro who, after leading a sweeping, two-year long Grand Jury investigation into sexual abuse by Catholic priests, accused Wuerl of “not telling the truth.”

Shortly after the grand jury report––in which Cardinal Wuerl’s name was mentioned over 200 times––was made public, the Archdiocese of Washington (ADW) launched a slick PR-driven website, The Wuerl Record, which appeared to serve no other purpose than to protect the embattled Wuerl’s reputation.  After being met with public ridicule, the site vanished as quickly as it appeared.

If Cardinal Wuerl’s early PR initiatives were meant to stem the tide of accusations and gain control of the narrative, his recent actions reveal a stunning shift in strategy from control, to denial, to complete silence.

Late Saturday night, not long after Viganò’s letter was made public by LifeSiteNews, the Archdiocese of Washington’s secretary for communications, Edward McFadden, said: “In spite of what Archbishop Viganò’s memo indicates, Cardinal Wuerl did not receive any documentation or information during his time in Washington, regarding any actions taken against Archbishop McCarrick.”

Through shoe-leather reporting and good sources, I found out that Wuerl was saying Mass at St. Matthew's Cathedral at 8:30 this morning. So I showed up, sat in the front row (despite great harassment from his private security guard who threatened to break my camera if I used it), then approached Wuerl after Mass for an interview. He declined and beat a hasty retreat into the sacristy while his guard tried to push and intimidate me out of his presence.. Ten minutes or so later, I ran into his press secretary Chieko Noguchi. Here is what happened.

Neumayr’s video of his one-sided exchange with Noguchi can be seen here:

Video of spokeswoman for Cardinal Wuerl refusing comment to right-wing Catholic blogger @george_neumayr of @Church_Militant, flees, her companion appears to shove his recording device. She denies Wuerl is resigning over abuse-related crisis https://t.co/wMVprgwcqH

For now Cardinal Wuerl and his team appear to have run for cover and remain in hunker down mode.

At the last minute, Cardinal Wuerl canceled his scheduled keynote address at last week’s World Meeting of Families in Dublin, Ireland.  He has also canceled other public appearances, including the installation of a new pastor in a suburban Maryland parish.

And as of this morning, the high profile cardinal who has always seemed to enjoy publicity is running away from cameras and reporters, as is his press secretary.

Cardinal Wuerl tendered his resignation to Pope Francis a couple years ago when he turned 75 years old, standard procedure for all Roman Catholic bishops.

Pope Francis has not accepted Wuerl’s resignation and so he remains in place.

Many Catholics would like to see him removed, and even the Washington Post and the Washington Examiner have published articles calling for his ouster.

LifeSiteNews has launched a petition urging Cardinal Donald Wuerl to resign as Archbishop of Washington D.C.

Here is the portion of Archbishop Carlo Maria Viganò’s letter which deals with Cardinal Wuerl:

Obviously, the first to have been informed of the measures taken by Pope Benedict was McCarrick’s successor in Washington See, Cardinal Donald Wuerl, whose situation is now completely compromised by the recent revelations regarding his behavior as Bishop of Pittsburgh.

It is absolutely unthinkable that Nunzio Sambi, who was an extremely responsible person, loyal, direct and explicit in his way of being (a true son of Romagna) did not speak to him about it. In any case, I myself brought up the subject with Cardinal Wuerl on several occasions, and I certainly didn’t need to go into detail because it was immediately clear to me that he was fully aware of it. I also remember in particular the fact that I had to draw his attention to it, because I realized that in an archdiocesan publication, on the back cover in color, there was an announcement inviting young men who thought they had a vocation to the priesthood to a meeting with Cardinal McCarrick. I immediately phoned Cardinal Wuerl, who expressed his surprise to me, telling me that he knew nothing about that announcement and that he would cancel it. If, as he now continues to state, he knew nothing of the abuses committed by McCarrick and the measures taken by Pope Benedict, how can his answer be explained?

His recent statements that he knew nothing about it, even though at first he cunningly referred to compensation for the two victims, are absolutely laughable. The Cardinal lies shamelessly and prevails upon his Chancellor, Monsignor Antonicelli, to lie as well.

Cardinal Wuerl, well aware of the continuous abuses committed by Cardinal McCarrick and the sanctions imposed on him by Pope Benedict, transgressing the Pope’s order, also allowed him to reside at a seminary in Washington D.C. In doing so, he put other seminarians at risk.