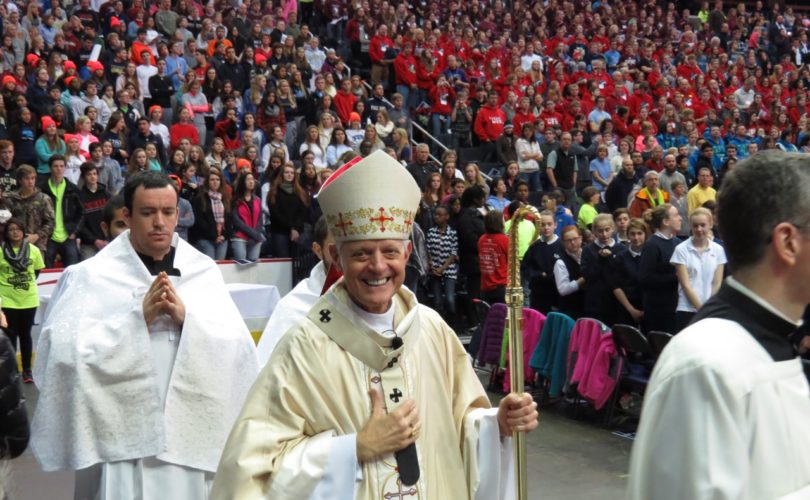 WASHINGTON, D.C. April 13, 2016 (LifeSiteNews) – Ex-Planned Parenthood director and employee of the year Abby Johnson will speak at Georgetown University on April 20, the same day Cecile Richards, the president of the abortion giant, will speak at the university.

Johnson became pro-life after assisting with an ultrasound-guided abortion.  She now directs a ministry for former abortion workers called And Then There Were None.

The next day, Cardinal Donald Wuerl, the archbishop of Washington, will offer a Mass for Life at 7:30 p.m. at Epiphany Catholic Church in Georgetown.

“It will be a Mass for Life to spotlight the Church’s teaching on the dignity of human life and also the role that Catholic institutions have in forming Catholic identity among its students,” Chieko Noguchi, Director of Media and Public Relations for the Archdiocese of Washington, told LifeSiteNews in an email.

The Jesuit university has defended the Lecture Fund at Georgetown University’s decision to invite the president of the nation’s largest abortion provider to speak on its campus.

“As the nation’s oldest Catholic and Jesuit university, Georgetown University is proud to be a university that deeply values our faith tradition and that encourages the free exchange of ideas,” the university’s communications office said in a statement. “We respect our students’ right to express their personal views and are committed to sustaining a forum for the free exchange of ideas, even when those ideas may be difficult, controversial or objectionable to some.”

The U.S. bishops wrote in their 2004 document Catholics in Political Life that Catholic institutions are prohibited from honoring those “who act in defiance of our fundamental moral principles” with “awards, honors or platforms which would suggest support for their actions.”

“This courageous witness by Georgetown’s pro-life students should shame the University’s leaders, who willingly betray the truth that is supposed to be the foundation and end of all Catholic education,” Patrick Reilly, President of the Cardinal Newman Society, told LifeSiteNews. “Cardinal Wuerl’s appeal for Catholic identity, in prayer and the Sacrifice of the Mass, is such a wonderful statement that so clearly contradicts the betrayal of Catholic identity at Georgetown.  Such statements by our bishops are opportunities to teach the truth, even while radical elements in our universities attempt to lead young people astray.”

On April 20 Georgetown Right to Life will also be hosting Students for Life of America’s We Don’t Need Planned Parenthood display outside the building where Richards will speak.  Johnson will join the students at the display, which illustrates Planned Parenthood’s lucrative abortion-centered business model, excessive taxpayer funding, and the existence of comprehensive health centers that provide everything and more that Planned Parenthood provides except abortions.

“Abby Johnson has personal experience at Planned Parenthood, and will reveal what the organization is really all about,” said Michael Khan, president of Georgetown Right to Life, the group hosting Abby Johnson. “It is important students learn about Planned Parenthood’s careless disregard for human life, and why Planned Parenthood is bad for women and children. Amidst media bias and abortion defenders, Abby provides clarity to this debate and will offer a positive, life-affirming message of hope and love that defends the most defenseless.”

Also on the day of Richards’s speech, Georgetown Right to Life will host “Flag Day.”  The group will display 3,600 flags on the Copley Lawn near the Front Gate to mark the number of abortions each day in the United States. They will also have one larger white flag this year for post-abortive women, who are also victims of abortion.

“Because a Catholic university has asked the president of the largest abortion corporation in our country to come and speak, we are more than happy to respond with life-affirming truth,” said Johnson. “If there was ever a time to take a stand against the abortion-promoting agenda of Planned Parenthood and their untruths, it is now.  We must not allow them to infiltrate our Catholic institutions without resistance.”

In conjunction with the Lecture Fund, the same group at Georgetown that is bringing Richards, Georgetown Right to Life is sponsoring an event entitled “Life-Affirming Alternatives to Planned Parenthood” on April 19 at 6:15 p.m. at the Copley Formal Lounge on campus.

Rep. Marsha Blackburn (R-TN), Chair of the Select Investigative Panel on Planned Parenthood in the U.S. House of Representatives, will address the audience and take questions.  A panel of pro-life healthcare experts will follow. The panel will be moderated by Dr. Jeanne Lord of Georgetown and includes Kathleen Eaton Bravo, Founder and CEO, Obria Medical Clinics; Astrid Bennett Gutierrez, Executive Director of Los Angeles Pregnancy Center and spokesperson and Vice President of Hispanics for Life and Human Rights; and Marguerite Duane, MD, MHA, FAAFP of Georgetown Medical School, Co-Founder and Executive Director of Fertility Appreciation Collaborative to Teach the Science (FACTS).

Kristan Hawkins, president of Students for Life of America, commented, “We are so proud of Georgetown Right to Life for proactively doing what their university should have done in the first place and inviting a courageous and dynamic pro-life woman to speak to the truth about abortion.”