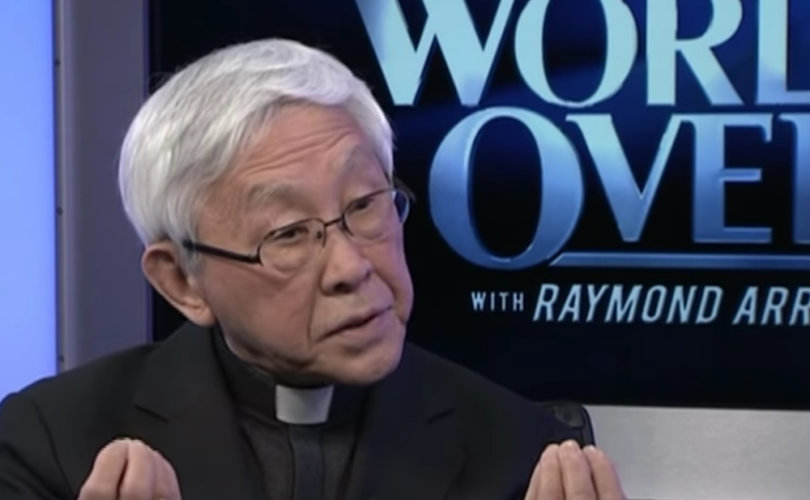 February 20, 2017 (LifeSiteNews) — Cardinal Joseph Zen in an interview with EWTN’s Raymond Arroyo expressed his support for the four Cardinals’ dubia that asks for clarification on the apostolic exhortation Amoris Laetitia’s chapter 8.

“I suppose it is a very respectful request by those bishops and Cardinals to have a clear statement,” Cardinal Zen said.

Pope Francis has been silent on the “yes and no” questions submitted by Cardinals Raymond Burke, Walter Brandmüller, Joachim Meisner and Carlo Caffarra.

Cardinal Zen is the bishop emeritus of Hong Kong, a stanch defender of Catholic truth against the regime in China, and a clear voice on pro-life issues. He supports the four Cardinals’ classical way of asking the Pope for clarification and agrees that Francis should clear up ambiguities.

“I think they are right to have an answer,” Zen said Arroyo in the interview.

Cardinal Zen also commented on the recent initiative of the Pontifical Academy for Sciences to invite China’s “organ czar,” Huang Jiefu, because of the country’s alleged involvement in illegal organ harvesting. Huang’s presence has been widely criticized since it can be interpreted as the Vatican’s acceptance of China’s international propaganda and its public legitimization of a questionable transplantation program.

For the last two decades, multiple reports have surfaced that China extracts organs from executed prisoners, voluntarily and involuntarily, on a broad scale.

“All these accusations are well documented. I think it is very unwise for the Vatican to invite those people, to give them a [platform],” Cardinal Zen said.

The Vatican hosted the Summit on Organ Trafficking and Transplant Tourism on February 7-8.

“I doubt if they could even know the facts,” Cardinal Zen said. “In Hong Kong, we have a newspaper by the Falong Gong. I read some of those [articles]. There you have the proof that they are making a business with those organs — incredible!”

Joseph Zen Ze-kiun served as sixth bishop of Hong Kong before retiring. He was made a Cardinal in 2006 and has been forthright on human rights issues, political freedom, and religious liberty. He stands at odds with the Communist Party of China. Cardinal Zen retired in April 2009.