Cardinal Zen torches the Vatican and his critics over China deal

The cardinal said the Chinese government is 'afraid of the Pope. But now the advisers to the Pope are giving him advice to renounce his authority.'

WASHINGTON D.C., March 9, 2018 (LifeSiteNews) – Cardinal Zen was on fire Thursday night as he spoke with Raymond Arroyo on EWTN’s The World Over.

“We now know that one of President Xi’s goals is to inculcate communist thought and blend it with theology,” said Arroyo. “Are you concerned that the Vatican is playing into his hands? His stated goal is to blend the communist agenda with existing religions. Is that what’s happening here?”

The Pope is being advised to renounce his authority

“Now you have blamed the Pope’s advisers for this deal,” noted Arroyo. “You have said it’s ‘suicide;’ you say it’s a shameless act of surrender.”

“I am not a cartoonist,” said Zen, while actually painting a vivid picture for the audience, adding that if he were, “I would make a cartoon showing the Pope kneeling, and offering the keys of the kingdom of heaven, saying, ‘Now, please, recognize me as Pope.’”

Cardinal Zen was describing the absurdity of the Vatican’s pending capitulation to China’s communist regime, pointing out that they already fear him. In essence, Rome already holds most of the high cards, yet they seem to want to forfeit the game in order to gain diplomatic stature.

“This is ridiculous,” he said. “They are afraid of the Pope. But now the advisers to the Pope are giving him advice to renounce his authority.” 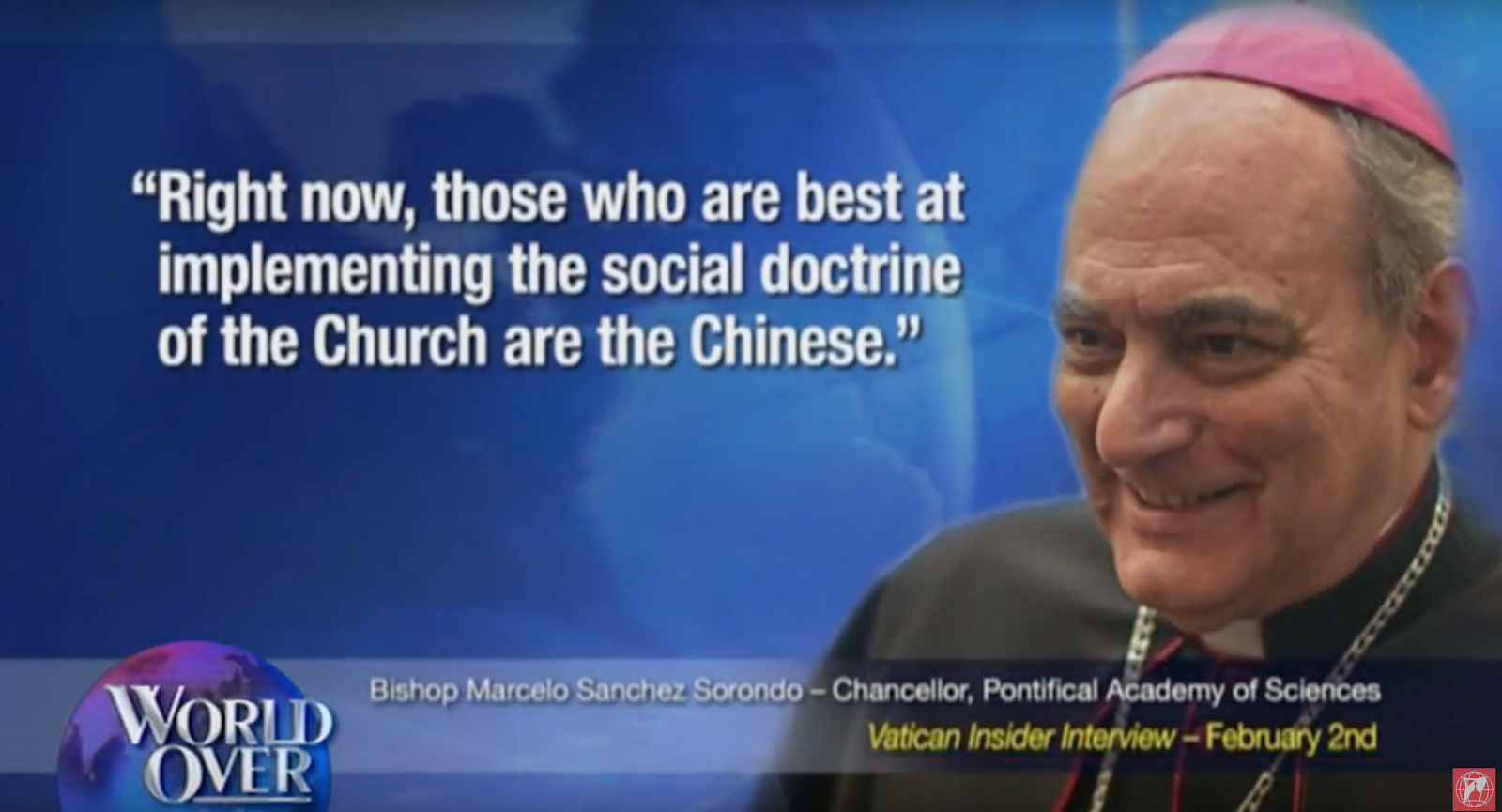 Last month, Bishop Marcelo Sanchez Sorondo, Chancellor of the Pontifical Academy of Sciences said, “Right now, those who are best at implementing the social doctrine of the Church are the Chinese.”

Arroyo asked Cardinal Zen, “What did you think when you heard that?”

“Please, leave him in peace,” chortled Zen. “We don’t have to waste time talking about that.” 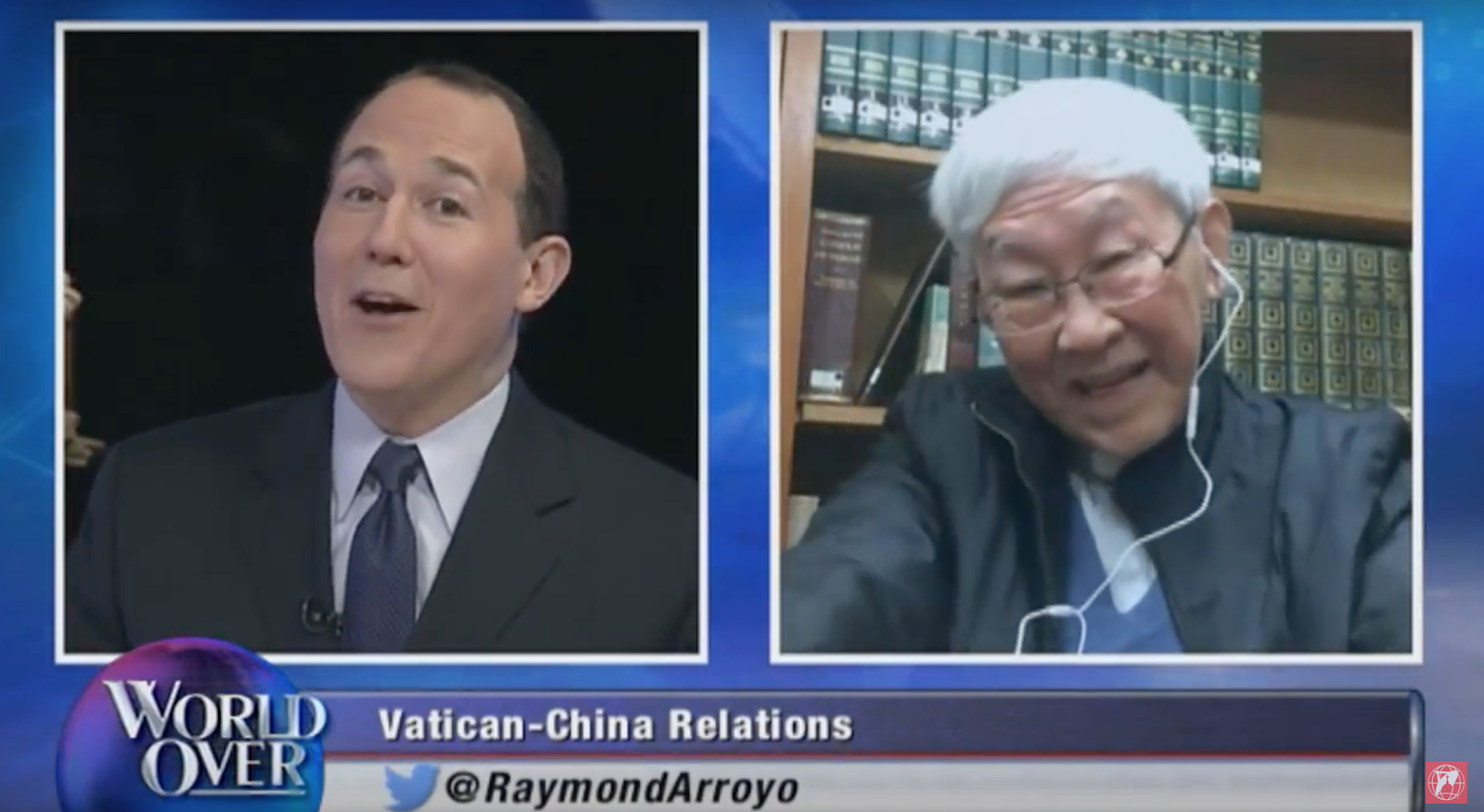 “So you don’t think China is living out the social teaching of the church, I take it?” countered Arroyo, also trying to overcome the urge to burst into laughter. 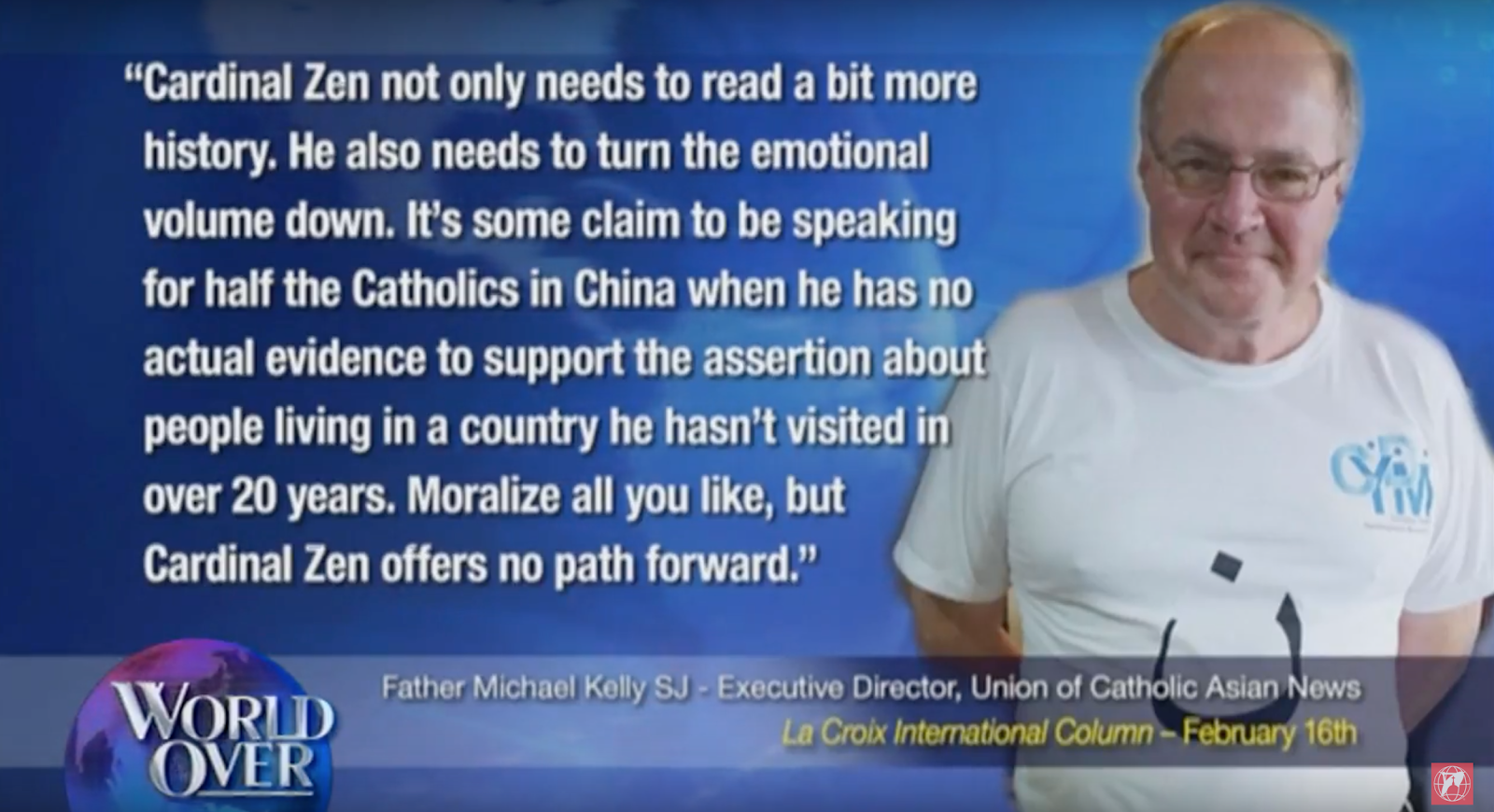 Fr. Michael Kelly, the Jesuit priest who serves as executive director of the Union of Catholic Asian News (UCAN), had written a commentary about Cardinal Zen that Arroyo described as a “nasty piece.”

“Cardinal Zen not only needs to read a bit more history,” said the Jesuit. “He also needs to turn the emotional volume down. It’s some claim to be speaking for half the Catholics in China when he has no evidence to support the assertion about people living in a country he hasn’t visited for over 20 years. Moralize all you like, but Cardinal Zen offers no path forward.”

“I would leave it to the people to judge who is more emotional,” said Zen, turning the tables. “I find his article very much emotional.”

Cardinal Zen went on to point out that he and Kelly were supposed to meet “We had an appointment. I invited him to lunch, but he didn’t show up.”

He also refuted Fr. Kelly’s claim of being ignorant about what is currently going in China, saying that from his “direct, immediate experience” living and teaching in mainland China for seven years, “I know the Church is completely enslaved to the government.”

They are going to 'annihilate the Underground Church'

“I don’t think anybody has a clear picture of what is going to happen,” said Zen, “because now we are alarmed by those two cases of the legitimate bishops asked to” yield their places to bishops who were previously excommunicated. But they don’t talk about the other five cases.”

Cardinal Zen was alluding to the fact that while international media have focused on the Vatican’s negotiations with China’s communist regime over two high-profile cases, there are five other excommunicated bishops that the Chinese government plans to reinsert into church leadership.

Among the five, said Zen, there are two of whom “everybody knows have wives and children.”

Zen went further, saying a bigger question should be asked: “What will happen to the 30 bishops in the underground? They will be brought into ‘the cage.’ That’s terrible!” exclaimed the Cardinal.

“They are going to annihilate the underground Church,” he added.

“And not only that,” he said, “even in the ‘official’ church there are so many good bishops, they are there, suffering, even fighting, and the government is forced to tolerate them. But now with this new arrangement, they lose every hope in the future.”

Ominous warning: ‘Back to the catacombs’

“I think we must have a spirit of perseverance and be ready for martyrdom … in order for the Catholic faith to spread in China,” warned the Cardinal at the conclusion of the interview.

“People are saying that ‘Cardinal Zen is pushing everybody to be martyrs,’” said Zen.   “Now, I never pray for martyrdom,” but if God wants this for us, “it is a grace, and he will give us the strength.”

“We have to pray, because what is coming is a tragedy,” he said, “and will weaken the faith, and we are going back to the times of the catacombs.”