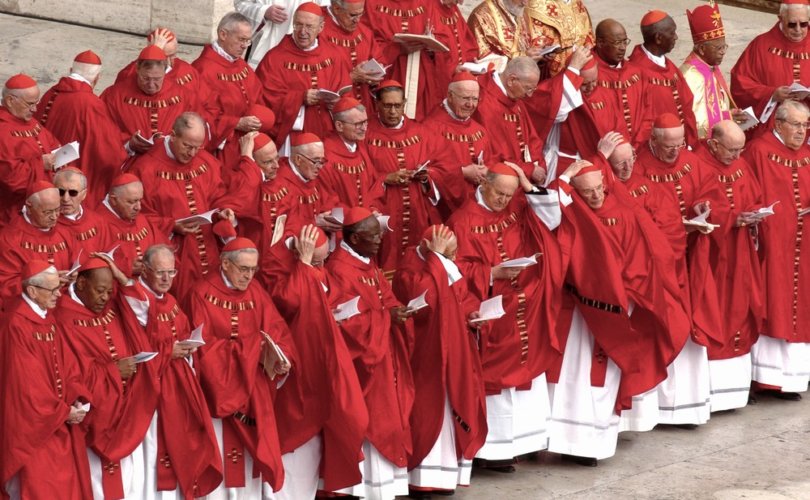 DEERFIELD, IL, April 10, 2018 (LifeSiteNews) – True devotion to the Chair of St. Peter is essential to a Christian spiritual life, but today there exists a “false devotion” to the Pope that claims he “must always be obeyed, no matter what,” renowned Church historian Roberto de Mattei told a gathering of Catholics just outside Chicago this past weekend.

Speaking at the 2018 Catholic Family News conference, de Mattei called on laity and clergy alike to oppose the “theological error” of “papolatry” and to live out a “true devotion” to the papacy.

“True devotion to the Chair of Peter is not the worship of the man who occupies this Cathedra, but is the love and veneration for the mission which Jesus Christ gave to Peter and his successors.”

Professor de Mattei’s talk — delivered to approximately 100 Catholics hailing from multiple continents — touched on a variety of topics, including collegiality, the resignation of Pope Benedict XVI, and the claim that Pope Francis has fallen into heresy and is no longer pope.

Central to de Mattei’s hour-long address was an urgent request for Catholics to expose by name the pastors who contradict perennial Church teaching.

Papolatry views the Pope as a “new Christ.” It takes the position that “there is no need to worry about anything” and that the pope “perfects the doctrine of his predecessors, adapting it to the changing of the times.”

Papolatrists “deceive themselves” and “tranquilize” their conscience by thinking the pope is “always right, even when he contradicts himself or his predecessors.”

In reality, “Tradition remains the criterion for discerning that which is Catholic and that which is not.” “Tradition comes before the Pope and not the Pope before Tradition.” Otherwise the Church’s perennial magisterium is replaced with a “living” magisterium that has “its rule of faith in the subject of the authority and not in the object of the transmitted truth.”

Obedience to the Pope “has its limits in the natural and Divine Laws, and in the Tradition of the Church, of which the Pope is guardian and not creator.”

Professor de Mattei, who will be speaking at LifeSiteNews’ Roman Life Forum in May 2018, also pointed out that Catholics cannot succumb to a “catacombist” mentality in response to the crisis in the Church.

Catholics cannot “retreat from the battlefield” and think they can “survive without fighting.” It is not permitted for a Christian to leave behind their militant attitude. “To make silence a rule of behavior…would be an error.” It would be to commit a guilty silence.

Who then must speak up and what must they do? Professor de Mattei said the responsibility falls not only on ordinary Catholics but also on Cardinals who in their silence “don't fulfill their duty.” It also falls on the shoulders of Pope Emeritus Benedict.

“The politics of silence has become a jail which imprisons many conservatives.” “Today is the moment to speak.” There has been a “modernist infiltration inside the Church” that is “wreaking havoc” in Rome. Catholics must oppose this infiltration with filial resistance, not with sarcasm, irreverence, bitter zeal, or pride.

Is the Pope Catholic?

Professor de Mattei then shared his thoughts on the historic resignation of Pope Benedict.

It is “incorrect” for Benedict to refer to himself as Pope Emeritus. Quoting Cardinal Brandmüller, de Mattei said “Canon Law doesn’t recognize the figure of a Pope Emeritus.” For Benedict to still dress in the white papal vestments and to still live in the Vatican “creates confusion,” de Mattei told LifeSiteNews. Benedict “seems to be convinced of still being Pope.” But “it is impossible that two Popes can exist. The Papacy is not dismountable: there can be only one Vicar of Christ.”

Professor de Mattei also addressed the increasingly relevant, and increasingly important, question of whether Pope Francis is still the pope.

After citing others scholars who have suggested Francis has fallen into heresy, de Mattei said “we must admit that the Pope himself promotes and propagates errors and heresies in the Church.” But, “as a tree can live for a certain time after its roots have been severed, so can jurisdiction be maintained…even after a fall into heresy. Jesus Christ maintains the person of the heretical Pontiff in his jurisdiction provisionally, until the Church recognizes the deposition.”

Speaking to LifeSiteNews, de Mattei said “nobody can depose the pope” but the Cardinals, can, in principle, “declare and recognize that being a heretic, [the pope] has lost his office.”

Until such a time comes, de Mattei added, Catholics must “clarify to people that unfortunately [Pope Francis] propagates heresy.”  However, Francis “does not lose his office until his heresy becomes manifest” and widespread. This “has not yet happened.”

Professor de Mattei proceeded to issue what appeared to be a warning to Catholics concerned with the direction Francis is leading the Church.

“We need to be careful of speaking of the ‘Bergoglian church,’ or of ‘the new Church.’ The Church today is occupied by churchmen who betray or deform the message of Christ, but it has not been substituted by another church. There is only one Catholic Church, in which they cohabitate in a confused and fragmentary way, different and counterpoised theologies and philosophies. It is more correct to speak of a ‘Bergoglian theology,’ of a ‘Bergoglian philosophy,’ and, if one wishes, of a ‘Bergoglian religion’ or ‘irreligion.’”

There are not two Churches, but one Church, he continued. It is, to be sure, a Church where bad tendencies have been introduced but it is a Church still governed visibly by its Vicar Pope Francis, whose election has not been contested by any Cardinal.

Professor de Mattei urged Catholics to unite themselves to “the good priests” inside of the one Church.

Assisting the auto-demolition of the Church

Drawing on his vast knowledge of Church history, Professor de Mattei explained how Pope Francis’ support for decentralization and collegiality is undermining the papacy.

Reminding his listeners of how ultramontanists were victorious at Vatican I, Professor de Mattei noted that the real protagonists of Vatican II were Liberal Catholics, and that among other things Liberal Catholics seek to transform the “monarchical and hierarchical constitution of the Church into a democratic and parliamentary structure.”

Professor de Mattei pointed out that this is precisely what Francis is attempting to do. He wants to usher in a “polycentric or multi-sided church” where the papacy is “conceived as a form of ministry at the service of the other churches, renouncing the juridical Primacy or government of Peter.”

But, de Mattei continued, such a view of the papacy runs counter to what has been handed down through the ages. The Pope is not an equal with the other Bishops. “Jesus Christ entrusted the mission of governing to Peter, after the Resurrection.” To democratize the Church and to “reduce her to a purely-sacramental dimension” is to “transition from a juridical Church to a sacramental Church, a Church of communion.”

Moreover, Professor de Mattei added, to destroy the Primacy of Peter is to accomplish what the enemies of Christ have been attempting to do for centuries because “they have understood that it comprises the visible foundation of the Mystical Body [of Christ].”