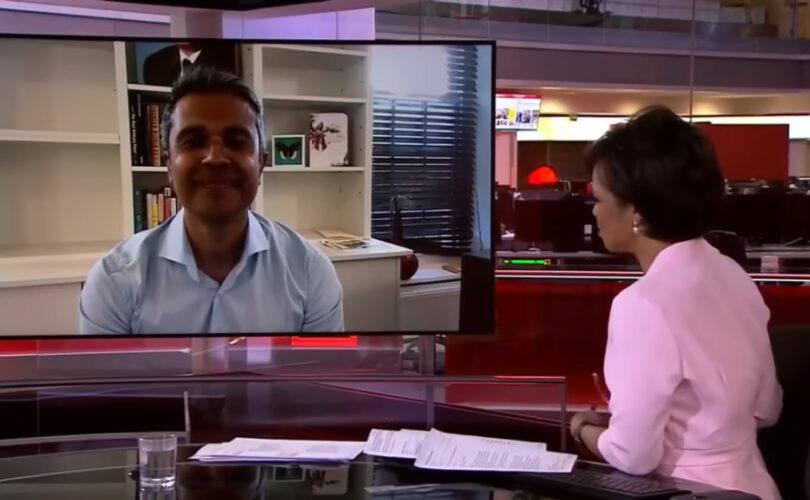 Dr. Aseem Malhotra is interviewed on the BBC on January 13, 2023YouTube/Screenshot

(LifeSiteNews) – In what is being hailed as a breakthrough for COVID-19 vaccine skepticism into the mainstream media, the BBC invited cardiologist Dr. Aseem Malhotra to speak on a segment about medical issues, during which he told viewers there was “lots of data” linking the jabs to heart problems.

Hosted by Lukwesa Burak, the segment began with the subject of statin pills for heart health. After taking issue with a recent National Institute for Health and Care Excellence (NICE) guidance on the cholesterol medication, Malhotra took the opportunity to tell the BBC’s audience that the mRNA-based COVID vaccines “do carry a cardiovascular risk.”

Cardiologist says likely contributory factor to excess cardiovascular deaths is covid mRNA vaccine and roll out should be suspended pending an inquiry.

We did it. We broke mainstream broadcast media 🔥🔥🔥 pic.twitter.com/F72YS7JAuE

“The vaccine has certainly helped people who are high risk, but now we should be reassured that Omicron circulating is really no worse than the flu,” he argued. “This is really time to pause the vaccine rollout.”

Malhotra, who was vaccinated, relayed the story of how he first started looking more closely at the issue when his father, in his 70s but otherwise healthy, died of an unexplained heart attack and was found to have severe narrowings of his coronary arteries. He then conducted his own review of the data and conversations with experts, and concluded that, on top of poor efficacy, the jabs’ cardiovascular risk was high enough that they should be suspended pending a thorough inquiry.

Deadline reports that the BBC later distanced itself from the segment with a statement that Malhotra “made unprompted claims about the Covid mRNA vaccine. We then asked Professor Peter Openshaw, who represents the overwhelming scientific consensus on the vaccine, to be interviewed on air on this topic and he challenged and rebutted the claims that had been made.”

However, mounting evidence indicates that concern about the COVID vaccines, which were developed and tested   under former U.S. President Donald Trump’s Operation Warp Speed initiative – in a fraction of the time vaccines usually take, is well founded.

The U.S. federal government’s Vaccine Adverse Event Reporting System (VAERS) reports 33,334 deaths, 187,676 hospitalizations, 15,970 heart attacks, and 26,045 myocarditis and pericarditis cases as of December 23. An April study out of Israel indicates that COVID infection alone cannot account for such myocarditis cases, despite claims to the contrary. Jab defenders are quick to stress that reports submitted to VAERS are unconfirmed, as anyone can submit one, but U.S. Centers for Disease Control & Prevention (CDC) researchers recognize a “high verification rate of reports of myocarditis to VAERS after mRNA-based COVID-19 vaccination,” leading to the conclusion that “under-reporting is more likely” than over-reporting.

In December, U.S. Sen. Ron Johnson (R-WI) hosted a roundtable discussion during which civil rights attorney Aaron Siri detailed data from the CDC’s V-Safe reporting system revealing that 800,000 of the system’s 10 million participants, or approximately 7.7 percent, reported needing medical care after COVID injection. “25 percent of those people needed emergency care or were hospitalized, and another 48 percent sought urgent care,” Siri added. “Also, another 25 percent on top of the 7.7 percent reported being unable to work or go to school.”

Another study by a team of American, British, and Canadian researchers, published December 5 in the Journal of Medical Ethics, found that COVID booster mandates for university students – a relatively healthy group at relatively low risk from the virus – do far more harm than good: “per COVID-19 hospitalisation prevented, we anticipate at least 18.5 serious adverse events from mRNA vaccines, including 1.5–4.6 booster-associated myopericarditis cases in males (typically requiring hospitalisation).”