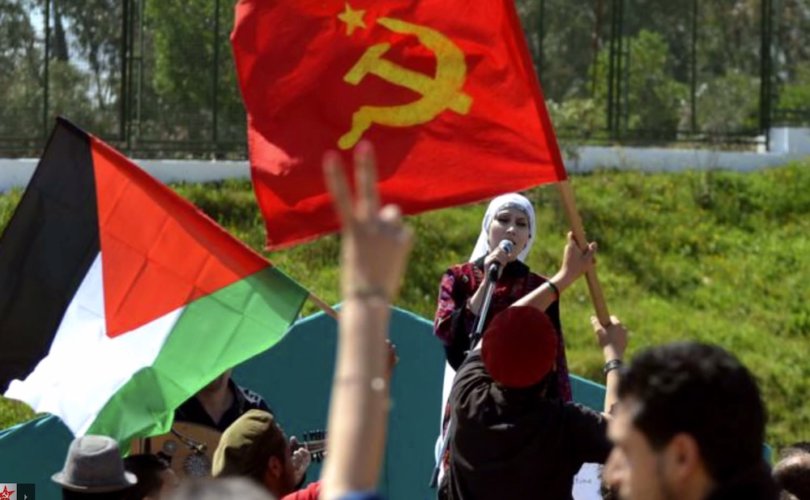 A participant carries a communist flag at a World Social Forum gathering - a common site at WSF events.

Caritas Internationalis, the Vatican's top social justice body, is involved in leading a radically pro-abortion, pro-homosexual and communist organization, according to a new in-depth report by the American Life League (ALL).

The World Social Forum (WSF) is an annual international meeting of social justice organizations formed in 2001. It describes itself as a forum for  “social movements, networks, NGOs and other civil society organizations opposed to neo-liberalism and a world dominated by capital or by any form of imperialism.”

However, the organization is also a vehicle for much more than radically leftist economic thinking, according to ALL’s report.

“The World Social Forum is fully committed to the spread of abortion, homosexuality and communism,” Michael Hichborn, the main researcher from ALL behind the report, told LifeSiteNews. “There is simply no way that a Catholic in good conscience can have anything to do with it at all. But for a Catholic agency to actually participate in such an organization’s governance is a gross betrayal of Holy Mother Church!”

Caritas Internationalis is a longstanding member of the International Council of the WSF, its governing body, as indicated by the WSF’s 2013 annual report and website, and Caritas’s website.

“So to be clear,” Hichborn said. “By being on the International Council, Caritas is integral to the operations and actions of WSF. This is a very serious problem.”

Caritas has been actively involved with the World Social Forum since at least 2004, according to Hichborn’s report.

In fact, Caritas boasted about the level of its involvement with WSF in its 2007 annual report, writing, “Motivated by the rallying call that ‘another world is possible,’ the Caritas Confederation has had an increasingly strong presence in the World Social Forum (WSF) process since the first WSF in Porto Alegre, Brazil in 2001.”

The troubling relationship with the WSF isn’t the first sign that all is not well at Caritas.

“It would be one thing if Caritas Internationalis had a mission to evangelize to the World Social Forum at the grassroots level – to bring the Gospel of Jesus Christ to those who are confused about the nature of justice and peace, and to do so while clearly distancing themselves from the very corrupt program of WSF,” Stephen Phelan, Director of Communications for Human Life International, told LifeSiteNews.

“But what Caritas Internationalis is doing appears to be the opposite: they lend their name and credibility to the Forum, even in its governance, without distancing themselves in any way from the evils that it promotes.”

“The most disturbing part of ALL’s report deals with the participation of the Catholic group, Caritas Internationalis, in the Forum,” Stephen Mosher, president of Population Research International, told LifeSiteNews. “What in the world is Caritas doing in such bad company, which openly works to subvert key teachings on the Church on the sanctity of Life, Marriage, and the need for self-control in matters of sex?”

“Given the group's promotion of communism,” Mosher said, “It should more accurately call itself the World Socialist Forum.”

ALL provided examples of the WSF’s Communist agenda throughout the report’s video introduction.

WSF’s website clearly explained early in its history that it was primarily funded by socialist governments, and that Communists “and the new social groups” are “working jointly to host the WSF.”

In a 2005 article on its website the WSF stated, “The major actors in the WSF include the Left of various shades (communists, social democrats, fourth internationalists), religious groups (many ascribing to the ‘liberation theology’ positions and genuinely opposed to imperialism) and NGOs.”

A 2007 WSF schedule included a session on the topic, “Mao: Then and Now – Revolutionary Ideas and Changing the World,” which contained panel discussion on, “experiences in taking the communist vision of a world without classes to young people in 2007.”

Then, in a 2006 article profiling the WSF, entitled “Communist expansion through the World Social Form,” the newspaper Fuerza Solidaria explained, “The World Social Forum promotes another type of globalization and imperialism, but with socialist emblems, a subterfuge which in practice disguises its communist character.”

ALL’s video report includes photos of WSF gatherings throughout the years with participants marching with banners and emblems calling for more Communism.

“In his decree against Communism, Pope Pius XII made it impossible for Catholics to cooperate with communist entities in any way,” Hichborn told LifeSiteNews. “And yet, Caritas Internationalis is on the governing body of a communist organization.”

ALL also details how abortion, homosexuality and population control are all part of the agenda as well, citing examples from the WSF’s website.

Hichborn showed video clips of various demands for abortion made at forums through the years. In one, a presenter and participants at the World Social Form yell back and forth: “What do we want?” “Choice!” “When do we want it?” “Now!”

“A woman's right to control her body is related to my right as a gay man, as a person to control mine,” says another presenter.

“As horrible as the WSF is,” Hichborn said. “The most disturbing fact of all is that the largest and most influential social justice organization in the entire Catholic Church is on the governing body of the WSF.”

“Michael Hichborn has once again produced the kind of dynamite report for which he is well-known,” Mosher told LifeSiteNews. “This time he lays out, in compelling detail, the pro-abortion, pro-population control, and pro-abortion agenda of the World Social Forum.”

“It’s hard to communicate to people how discouraging and confusing it is to Catholic missionaries who defend life and family when they see that those promoting the evils of abortion, contraception and even communism seem to have the support of the Church,” Phelan said. “We know the Church has clearly denounced the evils that WSF promotes, but then how can Caritas be silent when its endorsement is claimed for these evils?”

“For the preservation of souls,” Hichborn said to LifeSiteNews, “We beg (Caritas President) Cardinal Maradiaga to immediately and completely disaffiliate Caritas Internationalis from the World Social Forum.”

Repeated requests for comment from Caritas Internationalis by LifeSiteNews were not responded to by press time.