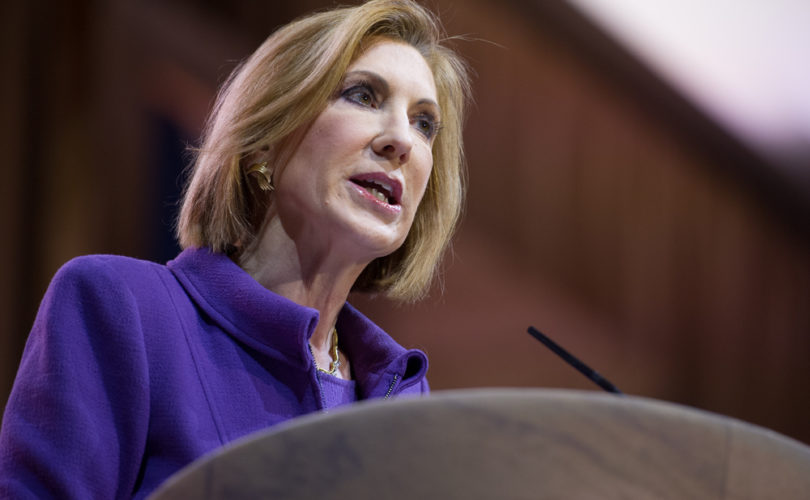 “Cecile Richards can step down, she probably should step down,” the Republican presidential candidate told Boston Herald Radio.

However, she also said that Planned Parenthood needs to be defunded, whether or not Richards steps down.

“Unless something fundamental changes, that we stop funding these people with taxpayer dollars, that they are actually investigated and prosecuted, the reality is nothing's really going to change,” Fiorina added. “The problem is, Cecile Richards stepping down won’t solve any of that. I’m not saying Cecile Richards shouldn’t step down, I’m just saying it’s the tip of the iceberg.”

Fiorina’s feud with Planned Parenthood began in earnest during the most recent Republican presidential debate when she issued a challenge to pro-abortion politicians.

“As regards Planned Parenthood, anyone who has watched this videotape, I dare Hillary Clinton, Barack Obama to watch these tapes. Watch a fully formed fetus on the table, its heart beating, its leg kicking, while someone says we have to keep it alive to harvest its brain.”

Planned Parenthood spokesman Eric Ferrero wasted no time calling Fiorina a liar.   “There is no polite way to say this: Carly Fiorina is lying.” He was swiftly and uncritically  joined by mainstream news media and the Democratic blogosphere.

Sarah Kliff of Vox declared, “the things Fiorina describes — the legs kicking, the intact ‘fully formed fetus,’ the heart beating, the remarks about having to ‘harvest its brain’ — are ‘pure fiction.’” And Amanda Marcotte of Slate stated with equal certainty that, “There is nothing in the videos made by CMP, either in the edited or full-length versions, that has anything approaching images of legs kicking or hearts beating.”

And yet, millions of viewers saw the baby’s legs twitch, just as, a few seconds later (at 6:15 in Episode 3) the same millions heard Holly O’Donnell, a former “procurement” technician, describe how a co-worker called her over to see her prod a nearly intact unborn  baby’s heart to restart. Then it was down to business as the same co-worker said, “Okay, since this is an intact fetus, it looks like we can procure a lot from it. We’re gonna procure a brain.”

Fiorina has fiercely maintained her claims and more recently counter-attacked, calling not only for the removal of Planned Parenthood’s $500 million in annual public funding, but, in the interview with Boston Herald Radio, twice called for Richards’ resignation.

Lifesite News asked the Fiorina Campaign for a comment on the hostile reaction of the liberal press to her challenge to the president and Hillary Clinton. Spokesperson Sarah Isgur Flores responded, “Carly was recently talking about Psalm 27: ‘The Lord is my light and my salvation—then whom shall I fear? The Lord is the stronghold of my life—of whom shall I be afraid.’ The liberal media doesn't scare her. She will continue standing for life and speaking the truth about what is going on at these clinics.”