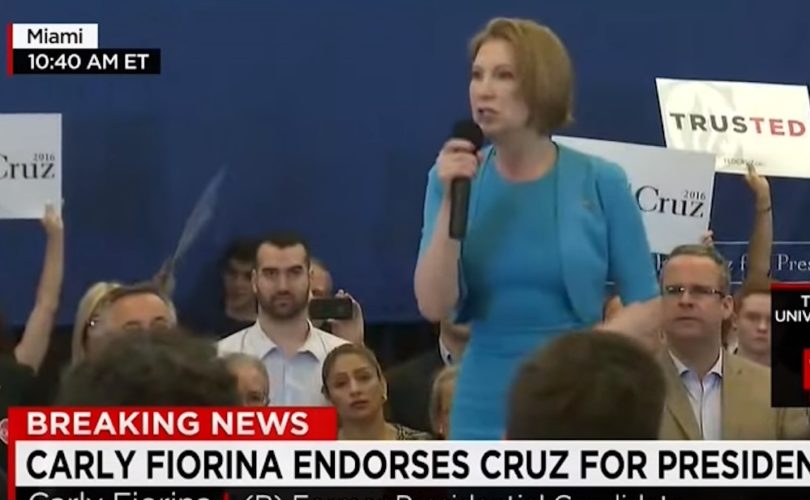 Fiorina, who won substantial support among the pro-life movement during her own presidential campaign, says Cruz is the best chance to change the status quo in Washington.

“I ran for president because I believe it is time to take our country back,” Fiorina said during a speech introducing Cruz in Miami. “I still believe that.”

Conservatives, especially pro-life voters, had to reclaim their party from misguided advice that they should focus on economic issues and liberalize their positions on abortion and illegal immigration, she said.

“When Republicans lost the last presidential election, the Republican Establishment thought it knew just what to do. Pass comprehensive immigration reform. Stop talking about 'social issues.'”

For instance, former Indiana Governor Mitch Daniels once called for a “truce” on social issues during national campaigns.

Fiorina, the former Fortune 50 CEO who gave the keynote speech at this year's March for Life in Washington, gave a ringing endorsement to the Texas senator, whom she called “a true constitutional conservative” and “a real reformer.”

Just days after giving a rousing speech at CPAC, Fiorina joins the leading evangelical, marriage, and conservative activists who have endorsed Cruz for the Republican nomination.

Several moderate Republicans have begun to grouse that they may have to coalesce around Cruz, long the bane of his fellow senators for his opposition to Beltway compromises that he believed sold out the GOP's conservative base.

Endorsements have been less important in the non-traditional year of 2016 than in previous election cycles. Marco Rubio won several high-visibility endorsements but has not translated that support into sustained victories in the primaries.

Donald Trump, on the other hand, had no support from any elected official until after the Iowa caucus. Following his landslide victory in New Hampshire, he was endorsed by former rival Chris Christie, as well as Maine Governor Paul LePage, and former Arizona Gov. Jan Brewer.

Fiorina said Cruz won her support, because he would not waver on vital principles once in office. “We’ve had enough of the deals,” she said today.

Her speech read in full:

I ran for President because I believe it is time to take our country back. I still believe that. In fact, I believe it more than ever. It is time to challenge and reform the system that has put too much economic and political power in the hands of too few. It is time to put a real constitutional conservative in the White House. My husband and I live in Virginia, where we met and married, and to be closer to our family. And last Tuesday, we had a primary. I saw my own name on the ballot. I checked the box for Ted Cruz.

It is my great honor to be here today to tell you why I voted for Ted and why I will work hard to make sure he is our Republican nominee and our next President of the United States.

When Republicans lost the last Presidential election, the Republican establishment thought it knew just what to do. Pass comprehensive immigration reform. Stop talking about “social issues.” Go along and get along. Don’t rock the boat. Rather than fight for real change they stood by as our government grew increasingly incompetent and corrupt.

But they didn't count on Ted Cruz. They didn’t predict that against all the odds and most of the predictions, Texas had just elected a Senator who is a true constitutional conservative, a real reformer, and who definitely doesn’t care if the Washington cartel invites him to their cocktail parties.

We need a constitutional conservative to unite our Party. Ted has spent his life defending the Constitution. My father was a conservative judge on the very liberal ninth circuit. It takes someone of true principles and convictions like my dad and like Ted Cruz to stick to their guns. Ted has been fighting these fights–whether it’s for religious liberty or our individual right to keep and bear arms or American sovereignty. And he has won.

We need a leader and a reformer to challenge the system in Washington and fix the festering problems–whether it’s our broken immigration system or the IRS. And here's something I've learned throughout my career: if you are a real leader, you absolutely must challenge the status quo. And when you challenge the status quo, you make enemies. It’s the price of leadership. And that price is one too many people aren’t willing to pay, and so they don’t lead. Ted Cruz has made enemies by taking on the political class. They're scared we found our guy.

Some in our party are saying they’d prefer a liberal like Donald Trump because he is a deal maker. We’ve had enough of the deals, enough of the cronyism. Donald Trump buys politicians like Hillary Clinton and then we are surprised when Washington continues only to serve the big, the powerful, the wealthy, and the well-connected. These are the same Republicans who tell us Ted is just too conservative, that they don’t like it when he won’t back down from a fight, that they wish he would quit making their jobs harder by forcing them to do what voters elected them to do.

Tip O’Neill famously remarked that all politics are local. Actually, I believe politics are personal. People vote based on their own lives, their own experiences, their own beliefs and hopes and dreams. If we want to defeat Donald Trump, we must defeat him by offering citizens conservative solutions to the problems in their lives.

Ted Cruz has done that, Ted Cruz is doing that and Ted Cruz will continue to do that. We need a real conservative to beat Donald Trump. And then, we need to go on to win in November by beating Hillary Clinton. You know I have been relentless in my criticisms against Hillary Clinton. And I will continue to raise my voice to men and women across this country about why she cannot be our Commander in Chief.

My fellow citizens. My fellow conservatives. It is time. We believe that no one of us is better than any other one of us; that each of us is gifted by God. We believe that everyone can live a life of dignity and purpose and meaning. We know that our principles, our values and our policies work best to lift people up regardless of their circumstance.

I believe we need a candidate who will stand for conservative principles. We need a nominee who will never settle for the status quo. Who will unite us as Republicans. It is time to unite behind Ted Cruz.

My fellow conservatives, stand with me to support the next President of these United States, Ted Cruz.