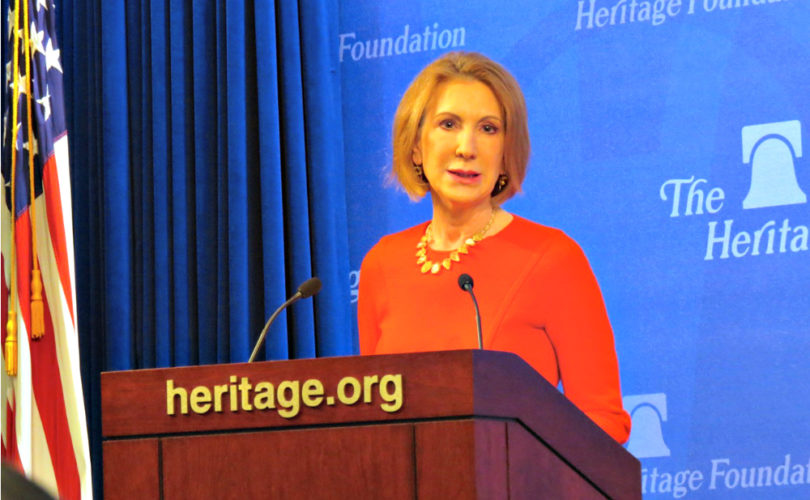 WASHINGTON, D.C., May 11, 2015 (LifeSiteNews.com) — The GOP's only female presidential candidate says that she supports gay civil unions and religious liberty — and that “government shouldn't discriminate” when it comes to benefits.

Speaking to the blog Caffeinated Thoughts, former HP CEO Carly Fiorina also said she would not support an amendment to overturn whatever decision the Supreme Court makes this summer.

“I think the Supreme Court ruling will become the law of the land, and however much I may agree or disagree with it, I wouldn’t support an amendment to reverse it,” explained Fiorina. “I very much hope that we would come to a place now in this nation where we can support their decision and at the same time support people to have, to hold religious views and to protect their right to exercise those views.”

“I think this is a nation that should be able to accept that government shouldn’t discriminate on how it provides benefits and that people have a right to their religious views and those views need to be protected. We need to protect religious liberty in this country,” Fiorina added.

Fiorina, who earlier this year criticized Apple CEO Tim Cook for attacking Indiana's religious liberty law, doubled down on this statement in an interview with Yahoo News' Katie Couric. Fiorina told Couric that “government should not bestow benefits unequally.”

“I’ve always been a supporter of civil unions. I provided benefits to same-sex couples when I was a CEO at Hewlett-Packard, and I also believe as so many do, that marriage has a spiritual foundation. Because only men and women can create life.”

Many social conservatives argue that because only relationships between heterosexual couples can bring about new human life, government should only provide benefits meant to support the continuation of the species. Fiorina, however, says that “government shouldn’t bestow benefits in a discriminatory fashion, and that people who believe marriage has a religious foundation, those beliefs should be respected. I hope we can come to that point.”

While many homosexual activists have compared civil unions for gay couples to the “separate but equal” laws meant to keep blacks and whites from intermingling prior to the Civil Rights Era, Fiorina told Couric that civil unions do provide equal treatment. “That’s what’s been going on. Government bestows in those states where civil marriage is legal, benefits are being bestowed to those gay couples and I support that.”

Fiorina also said that “it isn't” discrimination for governments to not allow gay couples to legally wed.

Spokespeople for Fiorina's campaign did not respond to LifeSiteNews' request for comment about how she would balance civil unions with religious liberty, especially in light of the weakening of religious liberty around the world and domestically.

Likewise, a question about state rights and marriage went unanswered, as did a question meant to clarify whether Fiorina believes the Supreme Court should overturn state laws on marriage.