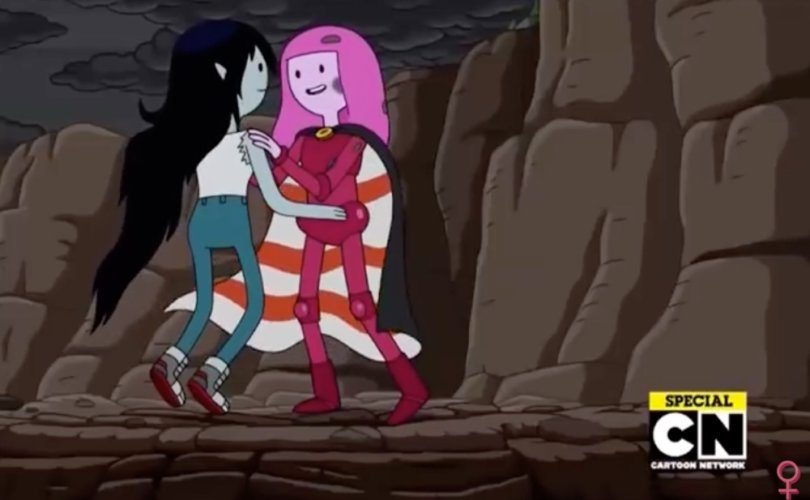 Premiering in 2010, Adventure Time is a fantasy adventure series mixing humor and drama in a surreal setting. The September 3 series finale featured a scene in which two female characters, Marceline the Vampire Queen and Princess Bubblegum, confirmed years of hints and fan speculation that they were lesbian by kissing each other on the lips.

“We knew that if we put this in, it would get some attention. But would it be too much attention?” said executive producer Adam Muto, who explained that the moment wasn’t in the original script and came at the insistence of storyboard artist Hanna Nyström. “Or would we be downplaying it too much? We knew we wanted to incorporate it, and in the end, you just have no control over how people will remember things.”

On September 9, TVLine approvingly called attention to just how many such moments have made it into American animation – once a field so heavily restricted that certain networks forbade punching in superhero shows – with a list of what it deemed the “10 Most Satisfying LGBT+ Reveals in American Animation.” In the current “rainbow age of television,” Andy Swift wrote, characters are “coming to terms with their sexuality at an unprecedented rate.”

While the list cites older examples from shows such as The Simpsons and characters from cartoons explicitly marketed to adults, such as Comedy Central’s South Park and Netflix’s BoJack Horseman, it also highlights moments from shows aimed at child and all-age audiences.

Cartoon Network’s Steven Universe featured a lesbian wedding this year, while the final season of Nickelodeon’s The Legend of Korra ended with the titular heroine holding hands with female companion Asami, which the creators later confirmed was meant to denote a romantic relationship.

Notably, several of the aforementioned examples were held until the end of a series’ run, suggesting that creators wanted to time the LGBT content for when offended parents could no longer affect the show’s ratings.

“There’s never going to be pushback from the normies because they’ve already resigned away their rights to protest for kid-safe media,” writer William Usher lamented of the Adventure Time development. “This is also all part of the Liberal agenda, where you take things that seem almost family friendly and then subvert it with agitprop.”

Usher pointed out that celebratory LGBT moments should particularly concern parents in light of Lisa Littman’s recent study, which Usher summarized as finding that “a lot of teens who claim to suffer from gender-dysphoria are just following peer-pressure trends from the Social Justice Warrior-occupied areas of social media.”

Ultimately, the latest developments from the likes of Adventure Time and Voltron seem to vindicate Focus on the Family analyst Jeff Johnston’s 2015 warning to LifeSiteNews that “we’ll only see more and more of this,” because children’s television “is a reflection of what’s already in our culture.”