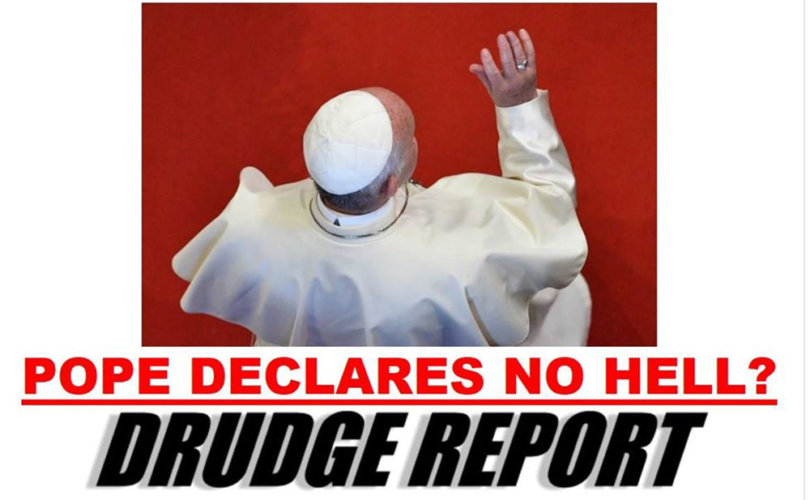 Screen capture of Drudge Report headline this past Good Friday for most of the day. Drudge is one of Internet's most-read websites.Drudge Report

ROME, April 4, 2018 (LifeSiteNews) – Mainstream media was in a furor last week over the news of Pope Francis purportedly saying that “hell does not exist” and that unrepentant souls in mortal sin simply “disappear.”

On the eve of the Holy Thursday, an Italian journalist published an article claiming that the pope had told him that hell does not exist. Eugenio Scalfari, 93, atheist journalist and founder of the left-wing newspaper La Repubblica, claimed on March 28 that Pope Francis had told him two days before that the souls of those who do not go to heaven are annihilated.

“Souls are not punished,” Francis allegedly said. “Those who repent obtain God's forgiveness and go among the ranks of those who contemplate him, but those who do not repent and cannot be forgiven disappear. There is no hell — there is the disappearance of sinful souls.”

Scalfari’s article — and then the Vatican’s vague warnings not to trust it — was picked up by mainstream media worldwide.

The story was highlighted in the United States by the Drudge Report, whose online headline shrieked “Pope Declares No Hell?” It linked to a March 29 article by Michael W. Chapman of CNS News, who called Francis’s alleged remarks “a denial of the 2,000-year-old teaching of the Catholic Church about the reality of Hell and the eternal existence of the soul.”

The New York Times led with the news that the Vatican had responded to the Repubblica piece with an assertion that Pope Francis does indeed believe in hell and that “no quotation of the article should be considered as a faithful transcription of the words of the Holy Father.”

The Times observed that Scalfari does not make notes or use a tape recorder during interviews. Despite this fact, the report also observed that this interview had been Scalfari’s fifth meeting with the Argentinian pontiff.

The “Daily Intelligencer” of New York Magazine said that it was “beyond ironic” that Good Friday was “marked by a murky debate over a claim that Pope Francis recently denied the existence of Hell in a discussion with an atheist friend.”

“It’s hard to imagine your average Pope having any atheists friends with whom he holds genial conversations. But Francis isn’t your average Pope, and so the controversy continues to rage despite the Vatican’s efforts to pour cold water on its hellish fires.”

'Left is even corrupting the Catholic Church'​

Conservative radio host Rush Limbaugh said that “it was easy to see, with this pope, that the left is even corrupting the Catholic Church”, something he had not thought possible after meeting the late Cardinal O’Connor of New York.

“This pope comes along, and I tell you, not just this,” Limbaugh said. “This pope is left-wing politically active on things like climate change. The whole left-wing agenda, the whole liberal agenda, this pope articulates it, and this pope is doing what he can to intermingle his own personal political beliefs with church doctrine. I never thought I would see that. I mean, I know there are leftists and liberals all over every organization, I’m not being naive, but the church is the church. What it believes is what it believes. It doesn’t change because public opinion changes, and yet it is, at least this pope seems to be doing just that.”

The Wall Street Journal intimated that with his remarks, which the Vatican did not deny, Pope Francis had yet again astonished.

“It was an extreme yet telling example of how Pope Francis has shaken up perceptions of Catholic doctrine,” wrote Francis X. Rocca, “drawing widespread attention from the non-Catholic world and causing turmoil within the church.”

Rocca detailed Francis’s emphasis on social and economic issues, and his downplaying of sexual and medical ethics. “Part of Pope Francis’ strategy has been generally to play down the importance of formal teaching,” he wrote.

“I doubt he said that because it’s heresy outright,” Kreeft said and explained the significance of the doctrine of hell.

“If there’s no hell, then heaven is no big deal,” he told the Globe. “If there’s no valley, the mountain isn’t very high. If it doesn’t exist, then ultimately we don’t have free will. … Scratch the doctrine of hell, and you find the possibility of free will underneath it.”

'Catastrophic for the Catholic Church​'

Online newsmagazine Vox.com observed that the Vatican communications department was once again scrambling after a scandal regarding a doctored photo led its chief, Dario Vignanò, to resign.

Journalist Tara Isabella Burton wrote, “If the Pope indeed said those words [attributed to him by Scalfari], the consequences would be catastrophic for the Catholic Church, which — according to its own catechism — ‘affirms the teaching of hell and its eternity,’ including eternal fire,’ although it stresses that ‘The chief punishment of hell is eternal separation from God’.”

Remarking on Francis’ relationship with Scalfari, Burton said that the question of whether or not Francis denied the existence of hell was “subordinate to another question”: “Why does Francis repeatedly engage in interviews with Scalfari, only to later say Scalfari misquotes his words?”

If the answer is that he’s trying to change doctrine by stealth, then Pope Francis risks appearing insincere.

“By participating in a kind of bait and switch — putting forth potentially heretical ideas, then formally denying them — Francis leaves himself open to the charge of disingenuousness,” Barton wrote.

Gwynne Dyer of Canada’s Hamilton Spectator asserted that “of course” Pope Francis had denied the existence of hell, and that “the reason why is obvious.”

“It is very hard for a well-educated person of modern sensibilities to believe that a loving god would condemn any of the human beings he created to an eternity of physical torture and mental anguish,” Dyer wrote “That is not what loving human fathers do, even to children who disobey them, so the traditional notion of Hell is a permanent problem for many Catholic theologians.”

But acknowledging that that Annihilationism is a heresy in the Catholic Church, Dyer believes that Pope Francis has found a “practical” way of communicating his true beliefs without wasting the time he wants to direct to “other, more urgent changes”:

“Pope Francis is a practical man, and he chooses his battles carefully,” Dyer wrote. “Changing Catholic doctrine on Hell would be a long battle that consumed most of the energy within the Church that he would like to devote to other, more urgent changes. Yet he still cannot resist making his true views known (in a deniable way) by having these occasional conversations with Eugenio Scalfari.

In the United Kingdom, the Catholic Herald demanded, “Why on earth does Pope Francis still trust Eugenio Scalfari?”  Journalist Christopher Altieri called upon Francis to “disown not only the precise verbiage Scalfari reported in his piece, but the ideas foisted upon him therein—at least the ones that are manifestly heretical.”

“The longer he does not,” Altieri continued, “the stronger the case becomes for believing he cannot.”

Deploring all previous episodes of “Scalfarism”, Altieri acknowledged that Francis’s continued conversation with the elderly journalist may stem from the pontiff’s wish to save the atheist’s soul. But even this charitable motive suggests that the Pope’s judgement is “appalling”.

“If the Pope’s solicitude for Scalfari’s soul is indeed so great, and Scalfari’s protestation of friendship sincere, then let Francis resign the office and go talk with his friend all day over vino burino and biscola,” Altieri concluded.

In Italy, a Vatican insider named Antonio Socci claimed on his blog Il Straniero (“The Stranger”) that the Vatican’s half-hearted distancing of Francis from Scalfari’s article had been precipitated by a threat from a “non-Italian” Cardinal. According to Socci, this unnamed Cardinal told Francis directly that the heretical statements attributed to him were grounds for the pontiff’s dismissal. The OnePeterFive blog has a translation of this as yet unsubstantiated story.

Socci speculated that Pope Francis and Scalfari are at some “game” in these interviews.

There is thus a game being played by Scalfari and Bergoglio for over five years now, in which the Argentine pope consents to a sort of double Magisterial track. When he speaks to Catholics he expresses himself in a certain vague and theologically ambiguous way. He avoids explicit statements and thus little by little demolishes doctrine (the tactic of boiling frogs slowly).

Meanwhile, he speaks through Scalfari to the secular world, making known his true ideas, which are so totally modern, in order to build up his “revolution” and to have popularity among non-Catholics and the media. [emphasis in original]

Some journalists acknowledged that on other occasions Pope Francis has certainly warned of the danger of souls going to hell. Meanwhile, the Catechism of the Catholic Church unequivocally affirms the existence of hell and the immortality of the human soul.

It states, “The teaching of the Church affirms the existence of hell and its eternity. Immediately after death the souls of those who die in a state of mortal sin descend into hell, where they suffer the punishments of hell, 'eternal fire.' The chief punishment of hell is eternal separation from God, in whom alone man can possess the life and happiness for which he was created and for which he longs (1035).”

It continues, “The affirmations of Sacred Scripture and the teachings of the Church on the subject of hell are a call to the responsibility incumbent upon man to make use of his freedom in view of his eternal destiny. They are at the same time an urgent call to conversion: 'Enter by the narrow gate; for the gate is wide and the way is easy, that leads to destruction, and those who enter by it are many. For the gate is narrow and the way is hard, that leads to life, and those who find it are few.”'

“Since we know neither the day nor the hour, we should follow the advice of the Lord and watch constantly so that, when the single course of our earthly life is completed, we may merit to enter with him into the marriage feast and be numbered among the blessed, and not, like the wicked and slothful servants, be ordered to depart into the eternal fire, into the outer darkness where 'men will weep and gnash their teeth’(1036).”