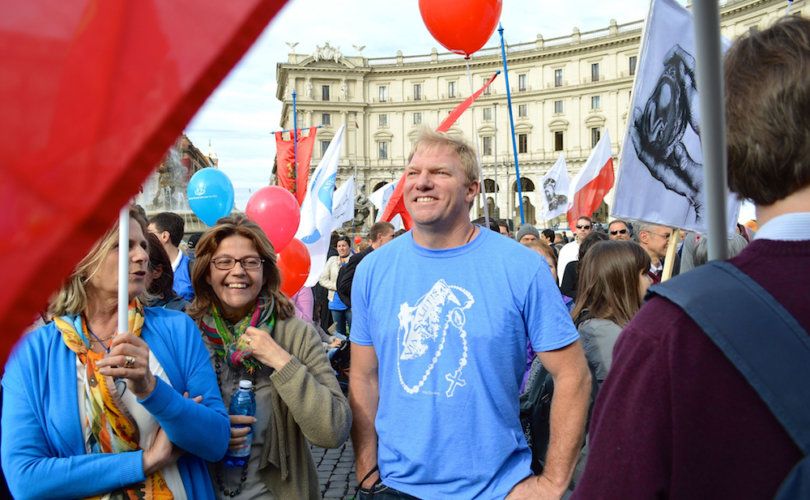 The “Serviam” organization has a mission of “radical conformity” to the fullness of truth found in the teachings of the Catholic Church.

It seeks to make the Church’s social teaching accessible to the laity for sharing in the political life of the U.S., co-founder and president Jason Jones says, to counter the prevalent culture of rebellion in the Church today by confronting dissent when needed.

“Christ’s bride, the Catholic Church, is being abused,” Jones told LifeSiteNews. “We are stepping in to defend her.”

“There is too much confusion in the Church,” Jones said. “We seek clarity to cut through the unnecessary fog.”

Serviam is an activist-oriented information organization focused on giving a voice to the vulnerable in society, continued Jones, by highlighting authentic Catholic social teaching and faithful citizenship.

The name Serviam is Latin for “I will serve.”

The phrase was St. Michael the Archangel’s response to Lucifer having told God, “Non Serviam” (I Will Not Serve) when, according to Catholic tradition, the Lord put His angels to the test of serving the heavenly kingdom.

Catholics often use the term Serviam to emphasize a willingness to love and serve God, with bishops and Catholic schools, publishers or institutions having used it as their motto.

Serviam’s “radical conformity” to the Church’s truth is needed, Jones says, to counteract a “progressive” agenda focused on Man and not God, which he attributes to pride.

“Many in and around the Church today are misrepresenting Church teaching and peddling their progressive agendas,” Jones told LifeSiteNews, “and seeking the approval of man rather than focusing on Christ's agenda and doing the will of God.”

The new initiative is a bold affirmation of “I Will Serve,” said Jones, “Kind of like a ‘Let's Roll,’ but for Catholics.”

The pro-life activist and film producer said Serviam will be influential, impactful and consequential because it will draw those involved to stand with the most vulnerable and to give a voice to the voiceless.

“We hope to influence the influencers and inform the faithful with our writing and commentary,” Jones explained. “We will hold Church leadership, scholars and others accountable to correctly represent Church teaching and defending the truly vulnerable.”

He said Serviam will use authentic Catholic social teaching to counter distortions by many clerics, theologians, scholars and political operatives seeking to advance progressive, heretical agendas. It will also represent those who want their church to speak with less confusion and greater clarity.

“Serviam counters the ‘wolves in sheep's clothing,’” Jones said, “those who seek to lead Catholics astray from the truth, via charitable, fraternal correction.”

“We see a lot of confusion and mistrust about where the Church stands on a number of issues,” he continued. “We will inform and transform hearts and minds, but exposing error and making clear the authentic and historical positions of the Church.”

“The phrase ‘see something, say something’ applies to Serviam in the fact when we see problems and misrepresentations of true Catholic social teaching, we will say something,” stated Jones.

Jones said the approach will include public petitions, published articles and books, and those involved in Serviam being active on social media with a distinct voice.

“We will leverage our experience, contacts and communication skills to engage the entrenched progressives in and around the Catholic Church who are misleading the flock,” he said.

This new incarnation of Serviam stresses involvement of the laity to support the Church’s clergy in defense of Her mission.

“The laity has a much stronger role than it thinks in charting a course for the future of our church, and our world,” Jones told LifeSiteNews.

“We can't leave every battle to our bishops and priests to take on by themselves,” he added. “It is the role of all Catholics to step up, get involved and defend the Church in today's world.”

“To put this another way,” Jones said, “Catholics just can't tend their gardens when the world is on fire.”

Catholics and other interested individuals can sign up to receive emails, sign petitions and stay in contact with the Serviam organization. They are also encouraged to forward Serviam articles to family and friends via email and social media, and alert the crew to examples of distortions of Church teaching and help them expose errors.

Jones also encourages people to be involved in charitable acts in their local community.

Visit the Serviam website at www.serviamusa.org to become engaged.

“Fight with us,” Jones beckoned. “Return to God. Do His will. Serve with us. Serviam!”