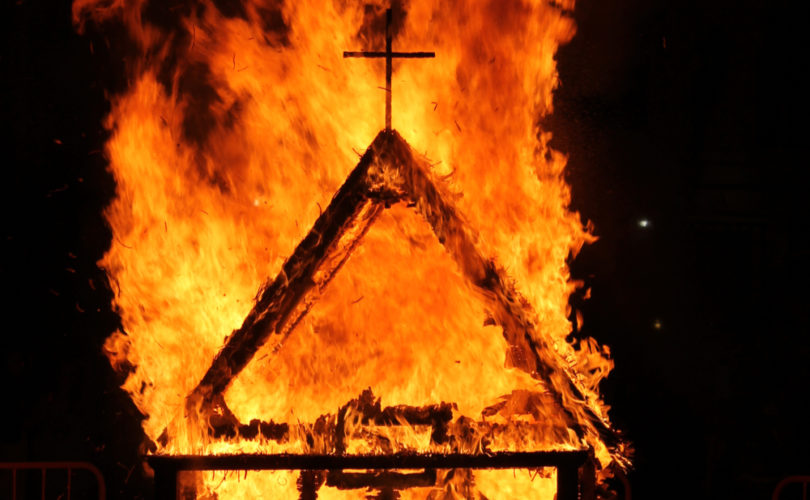 (LifeSiteNews) – The American advocacy group CatholicVote has made a map tracking attacks on Catholic churches as anti-Catholic violence increases across America.

On June 14, CatholicVote, an organization that defends “Faith, Family, and Freedom,” published an interactive map tracking attacks of violence on churches throughout America in the past two years, attacks beginning with the violent Black Lives Matter protests.

“Since 2020, there have been at least 140 attacks against Catholic churches in the United States, including thefts of sacred tabernacles, fires which severely damaged historic churches, spray-painting and graffiti, windows smashed, and statues destroyed (often with heads cut off),” CatholicVote reported.

“Crucially, while some of the attacks have included thefts, most have only involved property destruction, indicating that the motive is not primarily material gain,” the organization added.

The educational map allows users to click on a location and see pictures and learn the details of each attack.

CatholicVote wrote that the attacks took place across the country in 39 states, but with “hostspots with large clusters of attacks” including “New York City (15 separate church attacks in the area), Los Angeles (9), Seattle (7), Boston (5), Denver (5), Miami/South Florida (4); and Houston (4).”

“Some of the churches have been attacked multiple times,” added the group.

CatholicVote President Brian Burch has repeatedly appealed to the Biden Justice Department and Attorney General Merrick Garland to respond to the attacks. However, the requests have been met with silence from the Biden administration.

Additionally, last week, CatholicVote launched a map tracking all attacks against pregnancy care centers and other American pro-life groups which have intensified since the Supreme Court leak.

In May, a leaked draft opinion – which, if published, could overturn Roe v. Wade ­– sparked a series of violent attacks against pro-life centers across America. Now, as the Supreme Court seems closer to publishing this report, the pro-abortion attacks have intensified.

According to CatholicVote, there have been 24 attacks on pro-life organizations since the leak. The militant pro-abortion group “Jane’s Revenge” has vandalized pro-life centers across the country, in addition to targeting many churches.

On Tuesday, the group declared “open season” on pro-lifers, writing: “We promised to take increasingly drastic measures against oppressive infrastructures. Rest assured that we will, and those measures may not come in the form of something so easily cleaned up as fire and graffiti.”

Recently, U.S. Homeland Security warned of potential terrorist violence over the pending Roe v. Wade decision, claiming that pro-life supporters as well as pro-abortion activists have been encouraging violence, despite no evidence of violence or threat of violence committed by the pro-life side.