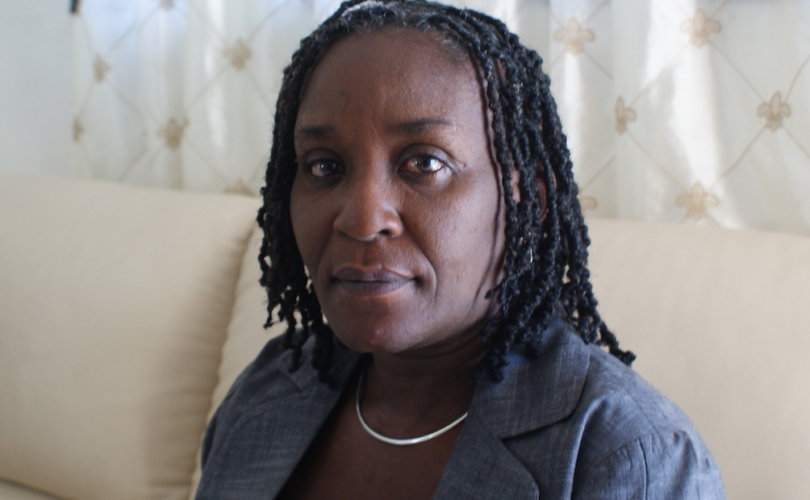 The Canadian bishops' aid agency flew in Haitian abortion activist Marie-Ange Noël to speak at schools and parishes during Lent 2017.

April 27, 2017 (LifeSiteNews) – The Canadian bishops’ international aid agency invited a Haitian pro-abortion activist to give talks in Canadian Catholic parishes, schools, and other venues during its “Share Lent” fundraising campaign this year.

The activist, Marie-Ange Noël, is the Coordinator of Fanm Deside (“Women Decide”), a feminist group supported by the Canadian Catholic Organization for Development & Peace (D&P) that was identified by LifeSite in 2009 as an advocate of the legalization of abortion.

LifeSiteNews has now discovered that Noël, acting as the Fanm Deside coordinator, urged the president of Haiti to legalize abortion as recently as 2014. LifeSite has also discovered that a coalition of international aid groups stated earlier this year that Fanm Deside is working for the legalization of abortion, implying that a representative of the group told them as much during a fundraising visit.

The 2009 LifeSiteNews article on Fanm Deside showed that a PowerPoint presentation on the organization’s own website indicated that the group was organizing “days of reflection and sensitization” on women’s issues, with one day set aside specifically to promote the “depenalization of abortion.” That PowerPoint presentation subsequently disappeared from the Fanm Deside website. LifeSiteNews also pointed out that another D&P-funded organization, Kay Fanm, claimed on its own site that Fanm Deside was supporting the depenalization of abortion.

Despite the evidence that Fanm Deside was pro-abortion, D&P continued to fund the group, and even made Fanm Deside a featured organization in its fundraising activities during the Lenten season in 2017. As Coordinator of the organization, Marie-Ange Noël was brought to Canada by D&P to talk about Fanm Deside’s activities and promote the theme “Women at the Heart of Change,” according to a statement on D&P’s own website as well as independent media reports.

According to the Haitian news agency Alter Presse, Noël publicly called on then-president Michel Martelly to legalize abortion in 2014, following a television interview in which the president referred to abortion as “a personal choice.”

Noël, on behalf of Fanm Deside, “called on the president of Haiti, Michel Martelly, stating that abortion, because it is a ‘personal choice,’ as he had affirmed on [the television station] TV5 Monde, must be depenalized,” Alter Presse stated.

“A depenalization will bring about the practice of this medical procedure in conditions that are respectful of life, they maintain,” wrote the news agency regarding Fanm Deside’s position.

“To have an abortion, in many cases, is certainly a personal choice, but the act must be depenalized so that it can come out of the secrecy in which it is practiced,” Noël told Alter Presse, and added that the president “can’t just give his opinion like the most simple citizens.”

Another representative of Fanm Deside, Nadia Lafleur, spoke recently in Washington about the organization’s commitment to legalizing abortion in Haiti. According to a report published this year by the Haiti Advocacy Working Group (HAWGS), a coalition of international aid groups involved in development assistance in Haiti, Lafleur spoke to the coalition and explained what Fanm Deside does. HAWGS lists the activities of Fanm Deside based on Lafleur’s testimony and adds in the report that “The organization [Fanm Deside] also works to change Haiti’s laws that criminalize abortion as illegal.”

In addition to her recent public call to legalize abortion, Fanm Deside’s Marie-Ange Noël is listed as a signer of a petition decrying the prohibition of abortion and defending the activities of a homosexual advocacy organization, Kouraj, which had sparked outrage in the Haitian capital of Port-au-Prince by seeking to legitimize and normalize the gay lifestyle. When Kouraj sought to organize a public showing of a pro-LGBT film, the city’s Capital Commissioner had prohibited the event and a senator had called to complain, according to the Daily Mail. Kouraj also claimed to have received threats of violence.

The petition denounced the decision of public officials to criticize and prohibit the event, and claimed that “the struggle of the association Kouraj, for the recognition and protection of the rights of a category of citizens must be understood within the larger perspective of human rights.” It also lamented that “the same fundamentalist current uses the same methods of hate speech and intimidation against those who advocate for decriminalizing abortion (which is the third cause of the high rate of maternal mortality in Haiti and consequently a serious public health issue).”

Despite her openly pro-abortion stance, Noël appeared in a number of Catholic venues in Canada during this year’s Share Lent campaign, principally in British Columbia.  According to diocesan and parish announcements published on the Internet, from March 9 through March 12 Noël was scheduled to make fundraising pleas in the Diocese of Prince George, beginning with a visit to Immaculate Conception School (March 9), where she spoke about her feminist activism to children in grades 5-7. She was then scheduled to give talks at Christ Our Savior Church (March 11), St. Mary’s church (March 11), and Immaculate Conception Church (March 12). Following these appearances she would go to the Diocese of Kamloops to give talks at Holy Family Parish (March 13), Thompson Rivers University (March 14), and St Ann’s Academy and St John Vianney Parish (dates unknown). She was also scheduled to give a talk at Holy Trinity Roman Catholic Church (March 16) in the Diocese of Nelson, and finally Ascension Parish (March 17) in the Diocese of Victoria.

This is the second time that Development and Peace has been caught bringing a pro-abortion activist to fundraise in Catholic parishes for Share Lent. The first was in 2011, when D&P invited Fr. Luis Arriaga from the Miguel Agustín Pro Juarez Human Rights Center, a D&P partner based in Mexico City, to speak in the Diocese of Ottawa. Although LifeSiteNews had already exposed the organization as openly pro-abortion in multiple articles, D&P made Arriaga its star speaker for its Share Lent fundraising campaign that year, until the Archdiocese of Mexico City sent a letter to the Canadian Conference of Catholic Bishops denouncing the group’s pro-abortion stance.

“With respect to the theme of defence of life, the organization has supported pro-abortion groups and promoted the purported woman’s right over her body, against unborn life,” said a translation of the letter obtained by The Catholic Register.

When Ottawa Archbishop Terrence Prendergast confronted Arriaga about the accusations against the group and asked him to sign a statement supporting the right to life from conception to natural death, Arriaga reportedly refused on the grounds that such a statement would be “a violation of basic human rights.”

Archbishop Prendergast then decided to cancel all of Arriaga’s speaking engagements, and issued a statement condemning the “human rights” group. “Since the Centre’s support of groups in favour of abortion rights in Mexico is incompatible with the Church’s defence of the right to life from conception to natural death and the mission of Development and Peace, and in order to remove any doubt about this commitment, the speaking engagements of Fr. Arriaga have been cancelled,” wrote Prendergast.

Despite the clear testimony of the Archdiocese of Mexico City as well as Archbishop Prendergast’s own direct confirmation of Arriaga’s pro-abortion stance, D&P continued to deny that the Miguel Agustín Pro Juarez Center for Human Rights is a pro-abortion organization, and only weeks ago restated its claim to LifeSiteNews that it has never supported any pro-abortion group.

Please be polite and respectful in all communications.