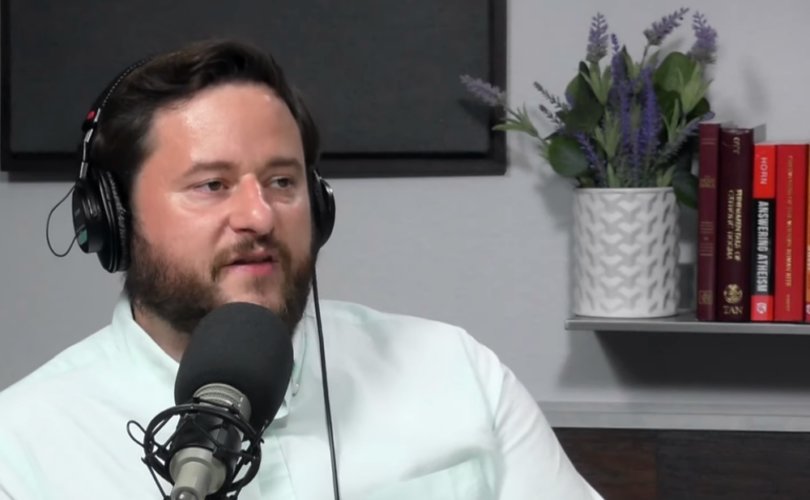 Dec. 3, 2020 update: Joe Heschmeyer has responded on his blog in a Dec. 2 post to the LifeSite report below. While he calls LifeSite’s title “misleading,” he acknowledges the “moment in 2016 in which I stopped knee-jerk defending everything that Pope Francis said, and realized that I had to take a new approach to how I was approaching the pope. In other words, I had fallen into (a), a sort of whitewashing of papal misstatements and errors, and I realized that I needed to correct that.” You can read Heschmeyer’s post here.

December 1, 2020 (LifeSiteNews) – A Catholic author whose articles regularly appear at Catholic Answers and Word on Fire recently explained the moment when he realized that he could no longer defend the Francis pontificate.

Joe Heschmeyer, an instructor at the Holy Family School of Faith Institute for the Archdiocese of Kansas City in Kansas, recently told Catholic Australian author and university professor Matt Fradd that he, like so many other Catholic apologists, defended “everything” the Pope said in the first years of his pontificate out of a sense of “filial respect and obedience” and wanting to give the Pope “the benefit of the doubt.”

Francis was elected Pope in March 2013. Ex-cardinal Theodore McCarrick that same year spoke about how Francis would “make the Church over again” and in two years would have “changed the papacy.” In 2015, one of Pope Francis’ top advisers, Argentinean Archbishop Victor Fernández, related that the change that the Pope is aiming to bring about is intended to be “irreversible,” such that the “next pope” will not be able to “turn everything back around.” As Pope Francis began to reveal and enact his agenda for the Church, he began to receive more and more pushback from Catholic clergy and lay scholars from around the world who pointed out the Pope’s break with perennial Church teaching and previous Popes.

Heschmeyer related on Fradd’s Oct. 12  “Pints with Aquinas” show that the “turning point” regarding his “knee-jerk defending of the Pope” came in 2016 in the midst of the Zika virus crisis.

“With Zika, it's still a terrible disease in Latin America, one of the consequences is that it can lead to birth defects where you have abnormalities in the shape of the baby's head. A reporter asked (Pope Francis) whether avoiding pregnancy might be the lesser of two evils in regards to this,” Heschmeyer said, noting that the question as it was framed was “really ambiguous,” since it was unclear if the questioner meant avoiding pregnancy by means of abstinence or contraception.

“But rather than clarify that, the Pope just kind of says, ‘Oh yeah, like, it is the lesser of two, or it could be the lesser of two evils here, because there's a contradiction between the fifth commandment and the sixth commandment – that ‘thou shall not kill’ is going up against the sexual morality that's broadly under the ‘don't commit adultery.’”

The Catholic Church teaches that using contraception is “intrinsically evil,” that is, using it is always and in every case an act opposing God and his law since it deliberately frustrates the life-giving potential inscribed in the sexual act by God and contradicts the giving of oneself “totally to the other” as demanded by the “truth of conjugal love” (CCC 2370). The Church’s teaching against contraception as well as her defense of spouses taking advantage of the natural cycles immanent in the reproductive system and engaging in marital acts only during those times that are infertile was expounded by Pope Paul VI in 1968 in his encyclical Humanae Vitae.

Heschmeyer went on to say that those who defended the Pope’s comments by attempting to interpret them according to Church teaching were devastated when, the following day, papal spokesman Fr. Federico Lombardi confirmed that the Holy Father was indeed speaking of “condoms and contraceptives.”

“So, if you were giving (Pope Francis) the benefit of the doubt, as I was, as many people were, with the initial comments that, well, it was just badly expressed, the papal spokesman eliminated any ambiguity in the wrong direction, so to speak,” he said.

The Catholic author also pointed out that the Pope’s notion that the commandments can contradict one another is not Catholic teaching.

“(The Pope) has this whole thing where he's imagining that the Ten Commandments can contradict each other, which is pretty specifically condemned in Veritatis Splendor,” Heschmeyer said, adding that “God doesn't contradict God.”

“(God is) never going to put you in a position where you have to choose between disobeying him or disobeying him, because that's not what a just and a loving God does.”

It was at this moment that Heschmeyer said he realized that there could be no “twisting or turning of these words” of the Pope to somehow interpret them according to Church teaching.

“That was kind of a wake-up call for me that I need to pivot how I’m approaching Pope Francis,” he said.

The author released a book in June through Catholic Answers Press titled Pope Peter: Defending the Church's Most Distinctive Doctrine in a Time of Crisis in which he defends the institution of the papacy as founded by Christ in the person of Peter while addressing how Catholics should deal with the situation of “bad” papal leadership.

“The Church right now is going through a period of crisis, at least in part because of bad papal and episcopal leadership. The household of God, which is the Church of the living God, is going through the roughest patch it has seen in centuries. Pretending otherwise is dishonest and it sets non-Catholics up for disappointment,” Heschmeyer wrote in his book.

LifeSiteNews reached out to Heschmeyer for comment but did not receive a response before publication.

Heschmeyer also runs a blog called Shameless Popery where many of his writings on God, the Eucharist, Mary, the Church, and the Bible can be found. In a Nov. 16 article published by Our Sunday Visitor, Heschmeyer addresses “papal authority and infallibility” in light of various papal scandals, including Pope Francis’ recent endorsement of civil unions for homosexual couples.

For Heschmeyer, while the Pope’s words on homosexual civil unions are “difficult (if not impossible) to square with prior magisterial teaching of the Church,” they in no way undermine the Church’s teaching on papal infallibility since such infallibility does not “protect the pope from saying erroneous things in off-the-cuff or private remarks, or in less-formal settings such as homilies.”

“Rather, (infallibility) means simply this: When the pope is speaking and acting in an authoritative manner as pope — when he canonizes someone, or declares something to be a part of the Faith — we listen and obey, secure in the confidence that the Holy Spirit is protecting him (and ultimately, us) from error. And ultimately it means that come what may, whatever scandal may break out tomorrow, whatever clerical reputations may be ruined, we can rest secure in the bosom of the Catholic Church, holding firmly to the union and the orthodoxy to which we are called by Christ,” he wrote.