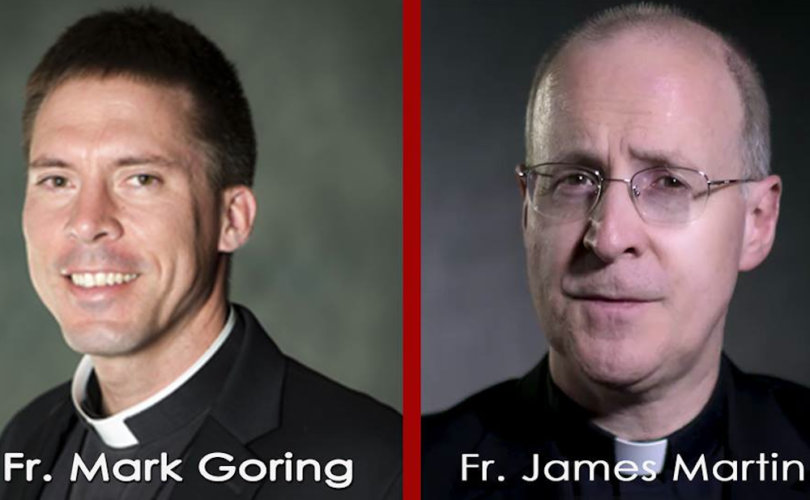 LINCOLN, Nebraska, January 11, 2019 (LifeSiteNews) – A passionate evangelist for the Catholic faith called out the discrepancy between the hierarchy’s handling of priests who speak in defense of the Church amid the sexual abuse scandal versus those who foster a message counter to the faith.

The disparity adds to the problem, and lay Catholics should not remain silent about it, Catholic apologist Doug Barry said Wednesday in a Facebook post that cited LGBT-affirming Jesuit Father James Martin and Chicago Cardinal Blasé Cupich in connection to fostering heresy and damaging behavior.

“A priest in the Houston diocese, Fr. Mark Goring, has been silenced for speaking out against the Church scandals and for encouraging action to take down what he has referred to as ‘the corruption network,’” Barry said, before then lauding Goring’s care for souls and love of the Catholic faith.

“Meanwhile, priests like Fr. James Martin, Cardinal Cupich and others who have been either directly teaching heresy or have been complicit in allowing heresy and destructive behavior to be promoted, are going on unchecked!” he exclaimed.

“This is outrageous and continues to feed into the crisis!” Barry said. “The laity cannot become complacent or be silent.”

Father Mark Goring, CC, director of the Catholic Charismatic Center in Houston and member of the Companions of the Cross out of Canada, evangelizes regularly via YouTube.

He had spoken critically in a video last week of Washington, D.C. Cardinal Donald Wuerl, who is expected to preside as normal over the archdiocese’s Youth Rally and Mass and Vigil Mass for Life at next week’s March for Life despite controversy swirling around him.

Catholics are reasonably angered at the prospect of scandal that would be created by Wuerl officiating as though nothing is wrong at the pro-life events, which draw tens of thousands of pilgrims.

In the video, since removed from YouTube, Goring said, “It communicates the utmost disrespect for the victims of sexual abuse by clergy, that these cases are no big deal and that Church leaders can get away with allowing these situations to be swept under the rug.”

Then in a January 5 video, Goring shared that he was asked to “cease and desist” by one of his “legitimate authorities,” and would immediately do so, explaining the importance of obedience for a Catholic priest.

He did not specify who the authority was – whether it was a superior from his religious community or someone from the Archdiocese of Galveston-Houston, where the Companions of the Cross apostolate that he directs performs its ministry.

Goring said he had not been told to remove any of his videos or banned from speaking about the scandal but felt because of the cease and desist he’d been given it was time for him “to enter into the silence of St. Joseph.”

Three days later, Goring posted another video in which he appealed to Pope Francis to give him permission to continue speaking about the Church’s sex-abuse situation. He again spoke of the importance of obedience, stressed he was grieved over any difficulty he may have caused his superiors, and promised to be honest and comment on the situation with love.

Goring said he felt like he needed to speak because there is a fire burning in his heart he couldn’t contain.

“All I care about is getting to heaven and doing God’s will,” he said. “And I want to fight for the honor of Holy Mother Church.”

In addition to the initial video pertaining to Wuerl being removed from YouTube, since a January 8 LifeSiteNews report on Goring’s appeal to Francis was published that also reported on the earlier two videos — both the January 5 “cease and desist” video and the January 8 appeal to Pope Francis video have been removed.

Barry, founder and host of the BATTLE READY program on EWTN, also hosted the Catholic network’s Life on the Rock program for years and has presented a one-man drama of “The Passion” worldwide since 1992.

He noted Goring’s effectiveness as an evangelizer and passion for the Catholic faith in his Facebook post.

“He has a YouTube channel that has been gaining popularity and for good reason,” Barry said. “I have met this priest and I have watched many of his videos. He is an upstanding priest who cares very much for souls and has a deep love for the Catholic Church.”

Barry further noted of Goring, “Many of his videos that encouraged us all to speak out more and defend the Church have since been removed from his YouTube channel.”

Barry’s Facebook post on what happened to Goring and the incongruence between treatment of priests such as him compared with others received dozens of comments and hundreds of shares. The comments were overwhelming in support of Goring, with some coming from well-known Catholics.

Paul Darrow, a Catholic speaker who advocates chastity for same-sex-attracted Catholics, commented, “The modus operandi of some of the superiors of these good priests is to cast aspersions on their character and on their competence, rather than to support them and His Truth.”

Barry’s post effectively illustrated the disparate treatment on the part of Church leadership with a split-photo layout containing side-by-side pictures of Goring and Martin, the Vatican communications consultor and editor-at-large for Jesuit-run America magazine who performs ubiquitous LGBT-affirming outreach.

Catholics continue to call for accountability in the sex-abuse scandal, which exploded again in recent months after revelations beginning in June that disgraced former Cardinal Theodore McCarrick sexually abused several minors and countless seminarians, and also the August release of the Pennsylvania grand jury report derailing seven decades of abuse by priests and associated cover-up there.

The resurgence of the crisis has brought renewed focus on the problem of homosexuality in the clergy, a long-suspected gay power network in the Church, and served to help clarify that a majority of the abuse committed in the crisis has been male-on-male, targeting post-pubescent boys and young adult men.

Cardinal Cupich was named by Francis to help organize his forthcoming summit on clergy sex abuse, which to date has been reported to not include a focus on seminarians or other vulnerable adults.

Cupich was recently in the news after it was learned that as bishop of Spokane, Washington, he was made aware that seven Jesuit priests, credibly accused of sexual abuse, were living unsupervised on the campus of Gonzaga University and he allowed them to continue in that situation.

Cupich was casual in his acknowledgement of sexual activity among clerics and adults at the November meeting of the U.S. bishops conference. He is among those attempting to attribute the clergy sex abuse scandal to clericalism, claiming that placing blame on homosexuality in the clergy is a “diversion.”

In an interview soon after Vigano’s testimony was released, Cupich said it would be “inappropriate” for the pope to answer questions on the issue.

The pope has a bigger agenda,” said Cupich. “He’s gotta get on with other things of talking about the environment and protecting migrants and carrying on the work of the Church. We’re not going to go down a rabbit hole on this.”