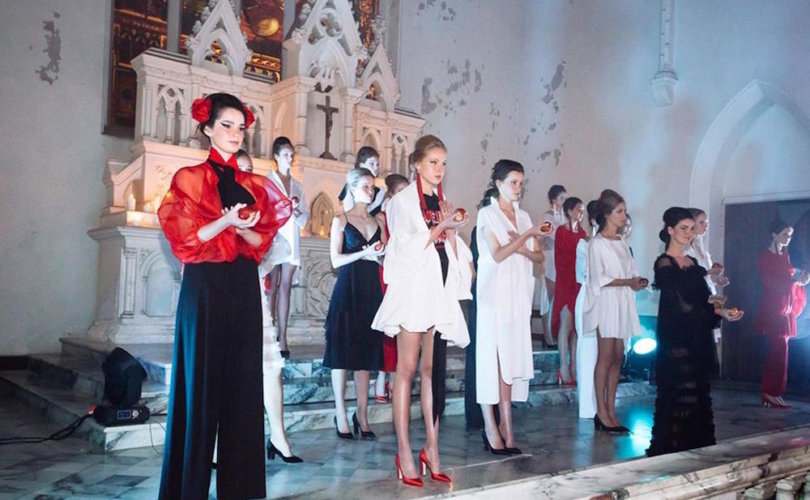 Editor's note: See photos of the event at the bottom of the story. LifeSiteNews has chosen not to publish the most sexually explicit, but they can be accessed here.

BRISBANE, Australia, December 15, 2016 (LifeSiteNews) — The Catholic archdiocese of Brisbane, which is led by Archbishop Mark Coleridge, has defended the staging of a sexually charged, explicitly anti-Christian ballet and fashion show in a Catholic church.

Held in St. Patrick’s Church in Fortitude Valley in October 2016, the event included an erotically suggestive ballet performed in front of the high altar in the sanctuary, during which an almost nude man and woman, wearing flesh-toned undergarments, re-enacted the fall of Adam and Eve, according to images published on the Stumbling Block blog, and others posted by the event organizers themselves.

The aisle of St. Patrick’s, a consecrated church in which Mass is held weekly, became the “catwalk” for a fashion show in which models strutted up to the sanctuary to pose before the high altar and tabernacle.

St. Patrick’s, built in the 19th century, is administered by St. Stephen’s Cathedral, which is under Coleridge’s pastoral care.

“The altar and the Blessed Sacrament were moved before the event and returned after it ended,” Taylor told LifeSiteNews in an email. “The Archdiocese has received one complaint about this matter, three months after the event.”

The ballet and fashion show was part of the James Street Festival, a “significant community event that takes place within the parish boundary,” Taylor wrote.

But the event was far darker than a community festival might suggest, and arguably a slap at the Church itself, according to a description on Panoptic Press.

The introduction of designer Gail Reid’s “Quelle Horreur” collection under her label Sorronda, the show highlighted her “subversive attraction for contrary or oppositional forces” and “obsession for the angelic, gothic and paranormal.”

The show was rife with feminist ideology and symbolism, as the review explained: “In the Western world, the creation story of the Garden of Eden has underpinned and naturalized the role of women as being subordinate to men for over two and a half thousand years.”

“Most importantly, the role of Eve in this mythological story has cast women as morally frail and open to temptation and has subsequently been used by religious and governmental institutions to stultify and restrict women’s freedom. What horror indeed!!”

Moreover, the “musical repertoire seemed not to have been chosen for its religiosity but rather for the ironic nature of the titles as these seemed to simultaneously reference the spiritual life whilst undermining the stability or surety of the promise offered by the sanctuary itself.”

Dr. Peter Kwasniewski, a theology professor at Wyoming Catholic College who writes widely on the liturgy, contends that “this was a sacrilegious event that profaned the sacred space by the explicitly sexual libertinism of the ‘show’.”

He pointed to Canon 1210, which states: “Only those things which serve the exercise or promotion of worship, piety, or religion are permitted in a sacred place; anything not consonant with the holiness of the place is forbidden.”

The Canon allows the ordinary to permit other uses on occasion, provided these are not “not contrary to the holiness of the place,” Kwasniewski told LifeSiteNews in an email.

“Any Catholic of sound judgment would be able to see that this ‘show’ is ‘contrary to the holiness of the place’.”

“It is clear from the photographs that the event organizers are using the fact that this is a consecrated building, with a traditional altar and crucifix, to create an ambience (complete with candles on the altar) which contrasts with their show in order to titillate or shock their audience,” pointed out Shaw.

“This can only be described as a deliberately sacrilegious act, since it is a mocking use of holy things,” he told LifeSiteNews in an email.

It’s evident St. Patrick’s “has not been deconsecrated, as it would be if it were sold for secular uses,” Shaw pointed out.

The archdiocese’s statement “refers to the removal of the Blessed Sacrament and the ‘altar’, but it would seem this refers to a temporary altar as the historic High Altar of the church can clearly be seen in some of the photographs,” he added.

“This is evidently a stone altar, which would have been solemnly consecrated when first installed; it also has a crucifix upon it.”

Moreover, the “passage of time between the event and people coming to see the photographs and raising their concerns is no defence of what happened,” Shaw observed.

The show was “clearly contrary not only to a proper Catholic instinct about the use of consecrated buildings, but also to the Church's legislation on the subject, notably Canon 1210 of the Code of Canon Law.”

Call for Coleridge to ‘make reparation to God’

An anonymous source within the Brisbane archdiocese told LifeSiteNews that Coleridge should “make reparation to God, then he should apologize to parishioners” that this scandal was allowed to happen, and then “take steps and be seen to take steps to call those responsible to account to make sure it doesn’t happen again.”

“It’s outrageous, it occurred right under his nose,” said the source. “It’s obviously a grave offence against the First Commandment; it’s a sin of great irreverence to Almighty God. It would be questionable in any context, but it’s profaning the house of God.”

What happened is “telling us that he’s not doing his job as the archbishop of Brisbane. He should see that things like that do not happen, and the people who were responsible are called to account.”

But Coleridge has other priorities. According to the source, the archbishop is the “driving force” behind Australia’s national synod to be held in 2020, which will be a “real disaster.”

Indeed, Coleridge told Brisbane’s Catholic Leader in August he anticipates the synod will deal with homosexual “marriage,” and “questions of ordained ministry.”

“Everything is potentially on the radar screen, anything that does not infringe on the Church’s faith, teachings or morals,” he told the Leader.

“I think we have to accept the fact that Christendom is over – by which I mean mass, civic Christianity,” Coleridge observed. “It’s over. Now, how do we deal with that fact?”

Coleridge also recently criticized the four Cardinals who issued a dubia to Pope Francis — asking him to clear up the confusion caused by Amoris Laetitia — for seemingly being afraid to face reality. He implied they may have been among those “voices” he heard during the synod on the family that “sounded very clear and certain but only because they never grappled with the real question or never dealt with the real facts.”

The four cardinals are “unnerved” by the Holy Father’s introducing a pastoral approach that involves a  “process of discernment, which deals in shades of grey, messy and unnerving,” Coleridge told the Jesuit magazine America, in an interview December 9, 2016.

He criticized what he described as “a false clarity that comes because you don’t address reality, and there’s a false certainty that can come for the same reason.”

“I think what Pope Francis wants is a church that moves toward clarity and certainty on certain issues after we’ve grappled with the issues, not before,” Coleridge asserted.

But one issue Coleridge evidently won’t grapple with is the demonstrable defilement of St. Patrick’s.

Canon 2011 states a penitential rite is required to repair the damage done to a sacred place by such events before worship can take place there again.

It reads: “Sacred places are violated by gravely injurious actions done in them with scandal to the faithful, actions which, in the judgment of the local ordinary, are so grave and contrary to the holiness of the place that it is not permitted to carry on worship in them until the damage is repaired by a penitential rite according to the norm of the liturgical books.”

But as Kwasniewski points out, the Canon “requires that the local ordinary recognize that this event constituted a violation.”

If the ordinary — in this case Archbishop Coleridge — is “not willing to do so,” Kwasniewski wrote, “the only recourse Catholics would have is to complain to the Vatican and, of course, make reparation themselves.”

Photos of the “sacrilegious” event allowed by the Archdiocese of Brisbane, courtesy of the Stumbling Block blog. LifeSiteNews has chosen not to publish the most sexually explicit, but they can be accessed here.

Full statement from Archdiocese of Brisbane:

The parish was approached by a local community event, the James Street Festival, to stage a combined ballet and fashion event around three months ago.

This is a significant community event that takes place within the parish boundary.

The parish agreed to be part of the community event, with proper precautions put in place.

The altar and the Blessed Sacrament were moved before the event and returned after it ended.

The Archdiocese has received one complaint about this matter, three months after the event.

The parish always assesses requests for use of the church on a case-by-case basis.

As this was a community event there was no charge for the use of the church.