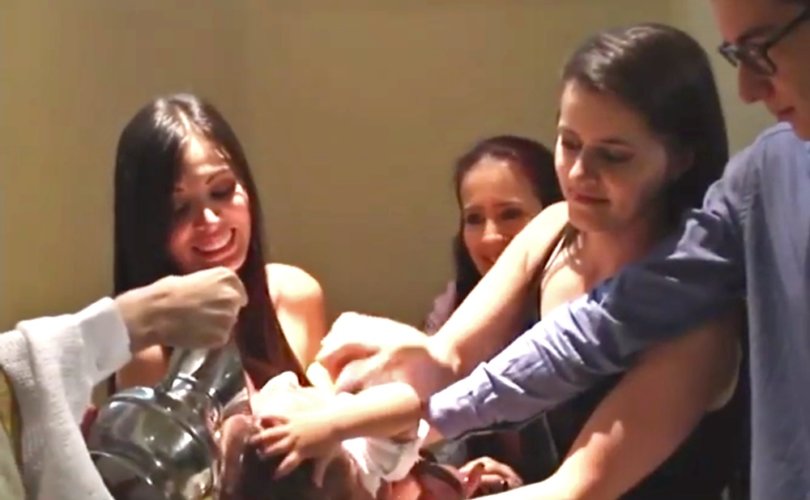 BOGOTA, Colombia, July 24, 2019 (LifeSiteNews) – The Catholic Archdiocese of Medellín, Colombia, led by Archbishop Ricardo Antonio Tobón Restrepo, has allowed a lesbian “married” couple to be listed on a child’s baptism certificate as “Mother 1” and “Mother 2.”

The child, who was christened “Matias” last Sunday by a Catholic priest in Medellin, a city in northern Colombia, was conceived by the artificial insemination of one of two women listed on the certificate.

Manuela Gomez and Luisa Gomez entered into a state-recognized “marriage” some 17 months ago. According to an interview with RCN Radio, biological mother Manuela Gomez said: “We tried to ask at several churches and were told that we could have him baptized, but they would only enter the name of one gestating mother, which is me.”

Manuela Gomez told the station, “That didn’t seem right to us, because Luis is also a mom. On the church registry we appear as Mom 1 and Mom 2. A friend recommended a parish to us, where we were told that as a homosexual couple we are welcome to the Church as we always have been.”

Manuela said that they wanted the boy baptized because they were raised in the Catholic faith. She said that they believe that God is love and that He does not discriminate against anyone. Manuela added that they attend Mass as a family. Local television covered the baptism, which showed that the baby boy has a godmother and godfather.

The Rite of Catholic baptism states that it is the “role of the father and mother, accompanied by the godparents, to present the child to the Church for baptism.”

At one point in the ceremony, the father and mother are asked if they accept the responsibility of “training him (her) in the practice of the faith.”

“It will be your duty to bring him (her) up to keep God's commandments as Christ taught us, by loving God and our neighbor. Do you clearly understand what you are undertaking?” the rite asks. Parents are to respond: “We do.”

The Catholic Church, following teachings in both the Old and New Testaments of the Bible, teaches that homosexual practices are evil. Homosexual acts are traditionally one of the four sins that cry to heaven for vengeance. Basing itself on Scripture and the natural law, the Catholic Church teaches that homosexual acts are “acts of grave depravity” and are “intrinsically disordered.”

St. Paul warns the Romans (1:26-27) that when men chose to worship and serve the creature over the Creator, God gave them up to the “lusts of their hearts to impurity, to the dishonoring of their bodies among themselves.”

“Their women exchanged natural relations for unnatural, and the men likewise gave up natural relations with women and were consumed with passion for one another, men committing shameless acts with men and receiving in their own persons the due penalty for their error,” he wrote. Elsewhere St. Paul warns that “homosexuals” among other sinners will “not inherit the kingdom of God” unless they become “washed…sanctified…justified in the name of the Lord Jesus Christ” (1 Corinthians 6:9-10).

The Code of Canon Law, which regulates the practices of the Catholic Church, asserts that for an infant to be baptized “licitly,” there must be a “founded hope that the infant will be brought up in the Catholic religion; if such hope is altogether lacking, the baptism is to be delayed.”

According to Noticias Floriencia, Manuela said that the decision by the Church is significant because it shows societal acceptance.

“It is a sign of respect,” she said, “of recognition and acceptance. We are excited and so happy.”

Luis and Manuela visited more than 10 churches until finding one that would register both of them as mothers. Manuela explained that the priest who baptized Matias assured the two women that since both of them appear on the boy’s birth certificate that both of their names could appear as mothers on the baptismal registry.

Noticias Florencia indicated that the archdiocesan curia replied via email that the names of the parents listed on the birth certificate must be entered as is to the baptismal registry, citing canon law.

Manuela Gomez said, “I couldn’t believe it, but it was real. But when I asked the priest for his opinion about my family, he said that we are welcome and that we would be respected as a family, which is something very important for us. Many people use the Catholic religion and the Church to discriminate and say homophobic things. But with this, the message is that God doesn’t discriminate against anyone.”

As for Luisa — “mother 2″ on the baptismal certificate — she said in the TV report:  “There are some people in the Catholic Church who say that it is a sin to be a homosexual, but look, the Church is accepting us and baptizing Matias. That is a big deal.”

In an interview with Telemedellin, Fr. Juan Diego Ruiz, a legal advisor to the archdiocese, said regarding the Church’s stance: “It is not to disqualify the same-sex couple who has a child. It is to say that the child is here, the child now exists. So, what do we do? We give them possibilities.”

July 25, 2019, 10:52 AM EST update: This story has been updated to include more of the quotation from Canon Law regarding infant baptism.